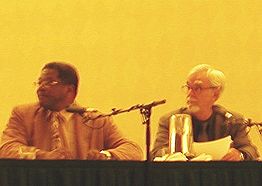 John R. Perry (born 1943) is Henry Waldgrave Stuart Professor of Philosophy Emeritus at Stanford University and Distinguished Professor of Philosophy Emeritus at the University of California, Riverside. He has made significant contributions to philosophy in the fields of logic, philosophy of language, metaphysics, and philosophy of mind. He is known primarily for his work on situation semantics (together with Jon Barwise), reflexivity, indexicality, and self-knowledge.

John Perry was born in Lincoln, Nebraska on January 16, 1943. He received his B.A. in philosophy from Doane College in 1964 and his Ph.D. in philosophy from Cornell University in 1968. He was awarded the Jean Nicod Prize in 1999.[1] He is a member of the Norwegian Academy of Science and Letters.[2]

Perry has made contributions to many areas of philosophy, including logic, philosophy of language, metaphysics, and philosophy of mind. However, Perry also produces non-technical work that reaches a wider audience, such as his humorous 1995 online essay "Structured Procrastination".[5] Perry was awarded an Ig Nobel Prize in Literature for this essay in 2011.[6][7] It states:

To be a high achiever, always work on something important, using it as a way to avoid doing something that's even more important.

Perry's 1978 book A Dialogue on Personal Identity and Immortality deals with standard problems in the theory of personal identity in the form of a dialogue between a mortally wounded university professor, Gretchen Weirob, and her two friends, Sam Miller and Dave Cohen. The views represented include those of Bernard Williams, John Locke, and Derek Parfit. The format of associating different philosophical positions with different characters in a dialogue recalls David Hume's Dialogues Concerning Natural Religion.

In 1979, Perry published "The Problem of the Essential Indexical" in which he combined his work on philosophy of language and philosophy of mind. Essential indexicals (I, here, and now) are parts of language that cannot be paraphrased away. They are seen as locating beliefs and are essential to understand the speaker's belief. Perry presents a now famous example to illustrate his point:

"I once followed a trail of sugar on a supermarket floor, pushing my cart down the aisle on one side of a tall counter and back the aisle on the other, seeking the shopper with the torn sack to tell him he was making a mess. With each trip around the counter, the trail became thicker. But I seemed unable to catch up. Finally it dawned on me. I was the shopper I was trying to catch."

In this example, the pronoun "I" is essentially indexical because it allowed Perry to realize that it was he himself making the mess. This realization caused him to change his behavior. Essential indexicals create the impetus for action. They cannot be paraphrased away while retaining their immediacy. If Perry were to say "Perry realized that Perry was making a mess," it would still not be essentially indexical because Perry would still have to understand that he himself is Perry. Without that extra step, there would be no reason for him to change his action. "I" is the only essential indexical in that situation.

In logic, Perry and Jon Barwise are known for discussion of the slingshot argument, especially in their 1981 article "Semantic Innocence and Uncompromising Situations".

In his 2001 book Knowledge, Possibility and Consciousness, Perry argues for what he calls "antecedent physicalism", according to which physicalism is antecedently taken to be a plausible and reasonable position, provided that there are no better rival theories. Thus, Perry defends a version of type physicalism against three major philosophical arguments for dualism: the zombie argument, the knowledge argument, and the modal argument.