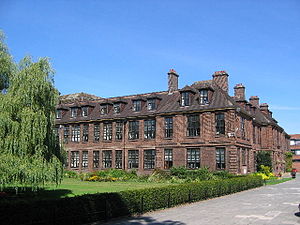 The Venn Building, University of Hull 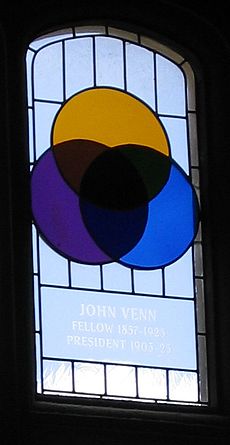 John Venn was born on 4 August 1834 in Kingston upon Hull, Yorkshire to Martha Sykes and Rev. Henry Venn, who was the rector of the parish of Drypool. His mother died when he was three years old.[5] Venn was descended from a long line of church evangelicals, including his grandfather John Venn.[6]Venn was brought up in a very strict atmosphere at home. His father Henry had played a significant part in the Evangelical movement and he was also the secretary of the ‘Society for Missions to Africa and the East’.[citation needed]

He began his education in London joining Sir Roger Cholmeley's School,[7] now known as Highgate School, with his brother Henry in September 1846. He moved on to Islington proprietary school and in October 1853 he went to Gonville and Caius College, Cambridge.[4][8] In 1857, he obtained his degree in mathematics and became a fellow. In 1903 he was elected President of the College, a post he held until his death.[8] He would follow his family vocation and become an Anglican priest, ordained in 1859, serving first at the church in Cheshunt, Hertfordshire, and later in Mortlake, Surrey.[9]

In 1862, he returned to Cambridge as a lecturer in moral science, studying and teaching logic and probability theory, and, beginning around 1869, giving intercollegiate lectures. These duties led to his developing the diagram which would eventually bear his name.

I began at once somewhat more steady work on the subjects and books which I should have to lecture on. I now first hit upon the diagrammatical device of representing propositions by inclusive and exclusive circles. Of course the device was not new then, but it was so obviously representative of the way in which any one, who approached the subject from the mathematical side, would attempt to visualise propositions, that it was forced upon me almost at once.

In 1868, he married Susanna Carnegie Edmonstone with whom he had one son, John Archibald Venn.

In 1883, he resigned from the clergy, having concluded that Anglicanism was incompatible with his philosophical beliefs.[8] In that same year, Venn was elected a Fellow of the Royal Society and was awarded a Sc.D. by Cambridge.

Venn compiled Alumni Cantabrigienses, a biographical register of former members of the University of Cambridge.[12] This work is still being updated online, see #External links, below. His other works include: