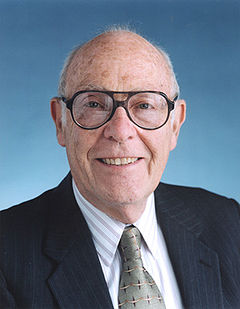 John Werner Cahn (born January 9, 1928, Cologne, Germany[1]) is an American scientist and recipient of the 1998 National Medal of Science. He was a professor in the department of Materials Science at MIT from 1964 to 1978. Since 1977, he has held a position at the National Institute of Standards and Technology (formerly the National Bureau of Standards, NBS). Dr. Cahn has had a profound influence on the course of materials and mathematics research during his career. One of foremost authorities on thermodynamics, Cahn has applied the basic laws of thermodynamics to describe and predict a wide range of physical phenomena.[2]

In 1954, Dr. Cahn joined the Chemical Metallurgy research effort at the General Electric laboratory in Schenectady, NY, led by David Turnbull. Turnbull had done pioneering work on the kinetics of nucleation, and there was a focus in the group on understanding the thermodynamics and kinetics of phase transformations in solids.

In 1964, Cahn became a professor in the Department of Metallurgy (now Materials Science) at the Massachusetts Institute of Technology. He left MIT in 1978. In 1969, Cahn began a long professional relationship with his graduate student Francis Larché, whose work focussed on the effect of mechanical stress on the thermodynamics of solids. The Larche–Cahn approach is the cornerstone of the treatment of the thermodynamics of stressed materials. Good examples of this phenomenon are the regions near a coherent precipitate—or the stress field around a dislocation.

In 1972, Cahn worked with David W. Hoffman to formulate a vector-based thermodynamics to describe the thermodynamics of interfaces, a formulation which is necessary to account for anisotropic materials. This is also known as the capillary vector formulation of interface energies. The mathematics of this treatment involves the concept of norms, although Cahn and Hoffman were unaware of it at the time.

In 1975, Cahn worked with his graduate student Sam Allen on phase transitions in Iron alloys, including order-disorder transitions. This work led to the Allen–Cahn equation.

Since 1984, he has held an affiliate professor position at the University of Washington.

In 1957, Cahn worked with John E. Hilliard to develop the Cahn–Hilliard equation which describes the thermodynamic forces driving phase separation in many systems. Their joint theory of spinodal decomposition is of interest for two primary reasons. First, it is one of the few solid-state transformations for which there is any plausible quantitative theory. The reason for this is the inherent simplicity of the reaction. Since there is no thermodynamic barrier to the reaction inside of the spinodal region, the decomposition is determined solely by diffusion. Thus, it can be treated purely as a diffusional problem, and many of the characteristics of the decomposition can be described by an approximate analytical solution to the general diffusion equation. In contrast, theories of nucleation and growth have to invoke the thermodynamics of fluctuations. And the diffusional problem involved in the growth of the nucleus is far more difficult to solve, because it is unrealistic to linearize the diffusion equation. From a more practical standpoint, spinodal decomposition provides a means of producing a very finely dispersed microstructure that can significantly enhance the physical properties of the material. [3][4][5][6] Spindoal decomposition has famously been utilized in the Vycor process to produce low thermal expansion glasses for high temperature applications.

In the theory of crystal growth, Cahn concluded that the distinguishing feature is the ability of the surface to reach an equilibrium state in the presence of a thermodynamic driving force (typically in the form of the degree of undercooling). He also concluded that for every surface or interface in a crystalline medium, there exists a critical driving force, which, if exceeded, will enable the surface or interface to advance normal to itself, and, if not exceeded, will require the lateral growth mechanism.

In 1977, Cahn published a simple mathematical treatment of the thermodynamics of wetting: the interaction between a liquid in contact with a solid surface. This paper laid out a simple formulation for describing the wetting transition—the point at which a liquid changes from forming a droplet on a surface to spreading out evenly as a liquid film over the surface. This theory had wide-ranging implications for many materials processing techniques

In 1982, Dan Shechtman observed a new crystalline structure with puzzling features. Cahn contributed to the theory of how such a structure could be thermodynamically stable and became co-author of the seminal paper which introduced quasicrystals. His competence in this new domain is widely acknowledged.

In 2004, Cahn and Bendersky presented evidence that an isotropic non-crystalline metallic phase (dubbed "q-glass") could be grown from the melt. This phase is the first phase, or "primary phase," to form in the Al-Fe-Si system during rapid cooling. Interestingly, experimental evidence indicates that this phase forms by a first-order transition. TEM images show that the q-glass nucleates from the melt as discrete particles, which grow spherically with a uniform growth rate in all directions. The diffraction pattern shows it to be an isotropic glassy phase. Yet there is a nucleation barrier, which implies an interfacial discontinuity (or internal surface) between the glass and the melt.[11]

In his retirement, Cahn has accepted a position at the University of Washington as an Affiliate Professor in the departments of Materials Science and Engineering and Physics. In his office in the new Physics/Astronomy Tower, Dr. Cahn is working on a project that includes a glass that grows from a melt like a crystal – as if by a first-order transition.

Dr. Cahn has three children and six grandsons. He now lives in Seattle, WA with his wife, Anne Hessing Cahn.

1984 Gold Medal, US Department of Commerce.

1981 Fellow, Japan Society for the Promotion of Science.

1960–61 Guggenheim Fellowship spent at the University of Cambridge, Goldsmith Laboratory.

1951 Allied Chemical and Dye Fellowship at University of California, Berkeley.