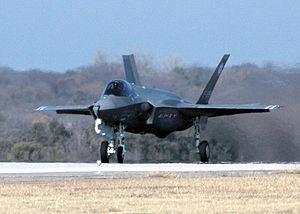 The JCA programme began in 1996 as the Future Carrier Borne Aircraft (FCBA), a replacement for the Royal Navy's Sea Harrier intended for operation from the RN's CVF aircraft carriers. The requirement for the FCBA was set out in Staff Target 6464 which specified a carrier-borne aircraft capable of air defence of naval and ground forces and self-escorting ground attack.

As the UK version of the JCA would operate from the two newly ordered Queen Elizabeth class aircraft carriers, the selection of the aircraft was closely linked to the design of the carrier. Candidates for the JCA were thus listed by carrier type:

Following the 1998 Strategic Defence Review the Navy's Harrier FA.2s and RAF Harrier GR.7s were merged to form Joint Force 2000 (later Joint Force Harrier). As such the requirement was revised to include the replacement of the RAF Harrier force; this led to the renaming of the project as the Future Joint Combat Aircraft (FJCA) in 2001. Later, in the third and final name change of the project, the word "future" was removed.

On 17 January 2001 the UK signed a Memorandum of Understanding (MoU) with the US Department of Defense for full participation in the Joint Strike Fighter project, confirming the JSF as the JCA. This gave the UK significant input into aircraft design and the choice between the Lockheed Martin X-35 and Boeing X-32. On 26 October 2001 the DoD announced that Lockheed Martin had won the JSF contract.

On 30 September 2002 the MoD announced that the Royal Navy and RAF will operate the STOVL F-35B variant. At the same time it was announced that the carriers would take the form of large, conventional carriers, which will be adapted for STOVL operations. The carriers, expected to remain in service for 50 years, will be convertible to CATOBAR operations for the generation of aircraft after the F-35 JCA.

In 2007, the Ministry of Defence confirmed its order for two Queen Elizabeth class aircraft carriers, expected to enter front line service with the Royal Air Force and Royal Navy from 2018.

The UK has invested GBP £1.08 billion in development funding for the JSF. Britain has also worked for five years for an ITAR waiver to allow greater technology transfer associated with the project. The effort, backed by the Bush administration, has been repeatedly blocked by US Congressman Henry Hyde because of his concern about potential technology transfer to third countries.[1] On Friday 27 May 2006 President Bush and Prime Minister Tony Blair issued a joint statement which announced:

Both governments agree that the UK will have the ability to successfully operate, upgrade, employ, and maintain the Joint Strike Fighter such that the UK retains operational sovereignty over the aircraft.[2]

The CEO of BAE Systems Mike Turner, the British contractor on the plane, had complained that the US has not given the UK (and his company) access to the crucial source code of the plane's software, thus making it impossible for the UK to maintain and modify the JSF independently. On 21 December 2005 an article was published in The Herald saying that MPs viewed as "unacceptable" the US refusal to grant access to the source code. The article quoted the chairman of the Commons Defence Select Committee as saying that unless the UK receives assurances of access to the software information, "the UK might have to consider whether to continue in the programme".[3]

Following on from this Lord Drayson, Minister for Defence Procurement, while on a government visit to Washington to speak to members of Congress, took a firmer stance. He was quoted as saying, ’We do expect [the software] technology transfer to take place. But if it does not take place we will not be able to purchase these aircraft’, and has mentioned that there is a 'plan B' if the deal falls through.[4] A suggested likely option was the development of a navalised Typhoon. Mike Turner has said it was not what he recommend, but:

as Lord Drayson has made clear, there needs to be a fall-back in case something goes wrong.[5]

As part of the 2010 Strategic Defence and Security Review, it was announced that the previous intention to order 138 STOVL F-35Bs had been changed to a smaller number of CATOBAR F-35Cs, with the anticipated entry to service delayed until around 2020. Only one Queen Elizabeth class aircraft carrier would be equipped with a catapult, and was expected to normally include twelve F-35Cs in its air wing.[6] In early 2012 the UK joint chiefs of staff publicly petitioned the Prime Minister to change the order back to the F-35B, on the grounds of lower cost, quicker implementation of fixed-wing carrier capability and the ability to operate both carriers with fixed-wing aircraft. On 10 May 2012, Philip Hammond announced that the coalition government had reverted to the Labour government plan to operate the F-35B STOVL variant.[7]

In 2013 the Defence Select Committee would say "We urge the MoD to learn the lessons of this closed, rushed and flawed decision of 2010."[8]

In March 2013 it was announced that the F-35 main base will be RAF Marham, in Norfolk, which was recently[when?] provided with 300 million pounds by the MOD, for new and improved infrastructure. With the first F-35Bs arriving in 2015, towards an initial operating capability from land in 2018, followed by first of class flights from HMS Queen Elizabeth the same year. Royal Navy F-35s will be operated by 809 Naval Air Squadron.[9]