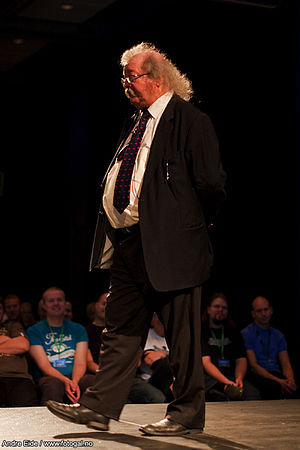 Jon Bing (30 April 1944 – 14 January 2014) was a Norwegian writer and law professor at the Norwegian Research Center for Computers and Law (NRCCL), and the Faculty of Law at the University of Oslo. Bing was considered a pioneer in international IT and information law. He held honorary doctorates from the University of Stockholm and the University of Copenhagen, and was a Visiting Professor at Kings College, University of London. Bing was part of The Protection of Privacy Committee. From 1979 to 1981 he was head of Norsk Filmråd. Between 1981 and 1982 he was the head of Council of Europe Committee on Legal Data Processing. Between 1993 and 2000, he headed Norsk kulturråd.

He was a member of the Norwegian Academy of Science and Letters.[1]

Together with Tor Åge Bringsværd and other students at the University in Oslo, Jon Bing started the Aniara society, a club for science fiction fans. He was often profiled in the media around the topic. He published several books, both fiction and non-fiction specialist literature. His first published work was the short story collection Around the sun in a circle, co-written with Bringsværd, and published in 1967. Bing was a prolific fiction author, often collaborating with other authors.

Bing was engaged with many subjects, especially in the field of technology. He was featured on television on the anniversary of the first Personal Computer in Norway, for example. He was a much-loved public figure, often offering opinions on digital media, copyright, science fiction, etc. He was outspoken about cases concerning ethics in technology, copyright, and the future in general.

His style of writing was calm, and at times dreamy. He wrote about people who stand outside of ordinary society, but attempts the impossible. In the short story Riestopher Josef from Around the sun in a circle he wrote about a boy who can't leave his house due to skin disease. The short story is about Riestopher who builds himself a spaceship and goes to the sun to capture a sunbeam.