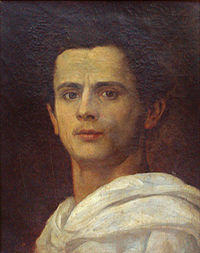 José Ferraz de Almeida Júnior (8 May 1850, Itu - 13 November 1899, Piracicaba), commonly known as Almeida Júnior, was a Brazilian artist and designer; one of the first there to paint in the Realistic tradition of Gustave Courbet and Jean-François Millet. The "Dia do Artista Plástico" (Day of Fine Artists in Brazil) is celebrated on his birthday. 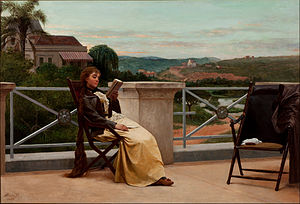 His art career began while he was working as a bell-ringer at the church of "Our Lady of Candelária" and created some small works on religious themes. The head priest there was sufficiently impressed to hold a fundraiser, so Júnior could go to Rio de Janeiro and take formal art lessons.[1]

In 1869, he enrolled at the Academia Imperial de Belas Artes, where he studied with Victor Meirelles and Pedro Américo. His simple, country speech and manners reportedly were the source of much interest[1] and, one might suppose, amusement. After graduating, he chose not to compete for a travel award to Europe, returning instead to Itu, and setting up a studio.[2]

He was apparently destined to see Europe, however. In 1876, during a tour of the São Paulo region, Emperor Pedro II saw Júnior's work, was impressed, and personally offered his financial support.[2] Later that year, a Royal Decree awarded Júnior 300 Francs per month for the purpose of studying in Paris. He soon settled in Montmartre and enrolled at the École des Beaux-Arts, becoming one of the many students of Alexandre Cabanel. While there, he participated in four of the Salons. 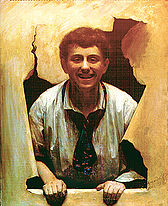 He remained in Paris until 1882 then, after a brief trip to Italy, returned to Brazil and exhibited the works he had created during his absence. The following year, he opened a studio in São Paulo and gave lessons. He also held exclusive art exhibitions and executed portraits of notable people, ranging from coffee barons to Republican politicians. In 1884, he held a showing at the "Exposição Geral de Belas Artes" and was made a Knight in the Order of the Rose

A year later, Victor Meirelles offered to give Júnior his position as Professor of History Painting at the Academy, but Júnior refused the offer, preferring to stay in São Paulo.[2] From 1887 to 1896, he made three more trips to Europe. During this period, he would increasingly turn from Biblical and historical works in favor of regionalist themes, depicting the everyday life of the "caipiras" and leaving the Academic style behind[2] while gradually approaching Naturalism. Despite these changes, his reputation at the Academy remained unchallenged and he received the Gold Medal there in 1898.

His life ended tragically a year later when he was stabbed to death in front of the Hotel Central in Piracicaba by his cousin José de Almeida Sampaio, who had apparently just learned about Júnior's long-standing affair with Maria Laura do Amaral Gurgel; Sampaio's wife who had briefly been engaged to Júnior.[1] 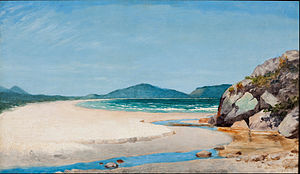