Josef Kammhuber (August 19, 1896 – January 25, 1986) was a career officer in the Luftwaffe and post-World War II German Air Force, and is best known as the first general of night fighters in the Luftwaffe during World War II. He is credited with setting up the first truly successful night fighter defense system, the so-called Kammhuber Line, but the detailed knowledge of the system provided to the Royal Air Force by British military intelligence allowed them to render it ineffective. Personal battles between himself and Erhard Milch, director of the Reich Air Ministry, eventually led to his dismissal in 1943. After the war, he returned to the military sphere in Germany's Federal Defense Force.

Josef Kammhuber was born in Tüßling, Bavaria, the son of a farmer.

At the beginning of World War I he was 18 and joined a Bavarian engineer battalion. He experienced the Battle of Verdun in 1916, and was promoted to Leutnant (second Lieutenant) in 1917.

He was allowed to remain in German's tiny post-war army, and in 1925 was promoted to Oberleutnant (First Lieutenant). Between October 1926 and September 1928, he received division-level leadership training. From 1 May to 30 September 1930, he was sent to the USSR for secret pilot training. On his return, he joined the staff of General Walter Wever, chief of staff of the Luftwaffe. He was promoted to Hauptmann (Captain) on 1 February 1931. Wever was in the process of attempting to set up a strategic bomber command; this effort, however, died in June 1936 when Wever was killed in an air crash. Kammhuber had continued to rise in the ranks, promoted to Major on 1 October 1934, Oberstleutnant (Lieutenant Colonel) on 1 October 1936, and then Oberst (Colonel) on 1 January 1939. This was followed by Generalmajor (Brigadier General) on 17 October 1940, Generalleutnant (Major General) on 1 October 1941 and General der Flieger (General of Aviation - Lt. General) on 1 January 1943.[1]

After it became clear that the Royal Air Force was starting a massive aircraft building program, Adolf Hitler decided to match their expansion and proposed a program worth about 60 billion Reichsmarks (RM). The German aircraft industry was incapable of matching this sort of request, due to both construction and material shortages, and the leadership within the Luftwaffe realised it was impossible. The chiefs of staff, Hans Jeschonnek, Kammhuber and Hans-Jürgen Stumpff, then put forth Kammhuber's own plan for about 20 billion RM, production levels which they felt they could meet. Milch organised a meeting between them and Hermann Göring, head of the Luftwaffe, in which Göring said that Hitler's program should be carried out as planned, confident that "somehow" they could meet his quotas.[2]

Kammhuber, realizing what was going on, put in a request in February 1939 for active duty. Promoted to Generalmajor (Major General), he was assigned as chief-of-staff of Luftflotte 2, and was in this position at the start of the war in September. On January 11, 1940, he was reprimanded by Hitler personally because of the Mechelen Incident. He was then transferred to the Western Front where he became Geschwaderkommodore of KG 51, a tactical bomber unit. During the French campaign he was shot down and captured, and interned in a French POW camp at the age of 44. He was released at the end of the Battle of France in July 1940, and returned to Germany.[1]

Once again an officer of the Luftwaffe's Generalstab, in July 1940 he was placed in command of coordinating flak, searchlight and radar units. At the time they were all under separate command and had no single reporting chain; so much of the experience of the different units was not being shared. The result was the XII. Fliegerkorps, a new dedicated night-fighting command. At this time, Kammhuber was promoted to Generalleutnant (Lieutenant General).[1]

He organized the night fighting units into a chain known to the British as the Kammhuber Line, in which a series of radar stations with overlapping coverage were layered three deep from Denmark to the middle of France, each covering a zone about 32 km long (north-south) and 20 km wide (east-west). Each control center was known as a Himmelbett (four-poster bed) zone, consisting of a Freya radar with a range of about 100 km, a number of searchlights spread through the cell, and one primary and one backup night fighter assigned to the cell. RAF bombers flying into Germany or France would have to cross the line at some point, and the radar would direct a searchlight to illuminate the aircraft. Once this had happened other manually controlled searchlights would also pick up the plane, and the night fighter would be directed to intercept the illuminated bomber but demands by Bürgermeisters in Germany led to the recall of the searchlights to the major cities.[3]

Later versions of the Himmelbett added two Würzburg radars, with a range of about 30 km. Unlike the early-warning Freya radar, Würzburgs were accurate (and complex) tracking radars. One would be locked onto the night fighter as soon as it entered the cell. After the Freya picked up a target the second Würzburg would lock onto it, thereby allowing controllers in the Himmelbett center to get continual readings on the positions of both aircraft, controlling them to a visual interception. To aid in this, a number of the night fighters were fitted with a short-range infrared device known as 'Spanner but these proved almost useless in practice.[4]

Another tactic that proved effective was to send their own planes to England while the raids were taking off or landing. Radio operators listening to the RAF bomber frequencies were able to recognize the start of a raid and the raiding force of about 30 night fighters would be sent over the RAF airbases to shoot down the bombers as they took off or landed. By the beginning of October the night intruder force had claimed a hundred kills but on October 13, Hitler ordered the force sent to the Mediterranean, despite their success.

British intelligence soon discovered the nature of the Kammhuber Line and started studying ways to defeat it. At the time RAF Bomber Command sent in their planes one at a time in order to force the defenses to be spread as far apart as possible, meaning that any one aircraft would have to deal with little concentrated flak. However this also meant that the Himmelbett centers were only dealing with perhaps one or two planes at a time, making their job much easier. At the urging of R. V. Jones, Bomber Command reorganized their attacks against a single target at a time, sending all of the bombers in a "bomber stream", carefully positioned to fly down the middle of a cell. The Himmelbett centers were now facing hundreds of bombers, countering with only a few aircraft of their own. So successful was this tactic that the success rate of the night fighters dropped almost to zero.

Kammhuber started looking for solutions, and the result was the two-prong concept of Wilde Sau ("wild boar") and Zahme Sau ("tame boar"). In the former, day fighters would be sent up and look for the enemy aircraft from the light of flares dropped from light bombers, searchlights set to a wide beam or illuminating lower clouds, or the fires on the ground below. The Wilde Sau force scored their most notable success during Operation Hydra (the British operation against the V-weapon centre), at Peenemünde on 17 August 1943. De Havilland Mosquito bombers had dropped target marker flares over Berlin and most of the night fighter force was sent there. When it was realized what was really happening, most of these aircraft were too far away and too slow to intercept the raid. However, the Focke-Wulf Fw 190s being flown by the Wilde Sau forces were able to reach them, and about 30 planes entered the third and last wave of the stream and shot down 29 of the 40 Avro Lancaster bombers lost on that raid.[5]

Zahme Sau envisioned freeing the night fighters (now equipped with radar for the final stages of the interception) from the Himmelbett cells and allowing them to attack on their own. This was not all that easy, given the capabilities of the current generation of radars, but newer systems being developed would greatly increase the detection range and angles. In this role the existing cells created as part of the original Kammhuber Line would be used primarily for early warning and vectoring the planes to the stream.[6]

At the same time Kammhuber continued to press for a new dedicated nightfighter design, eventually selecting the Heinkel He 219 Uhu after seeing it demonstrated in 1942. However Milch had decided to cancel the Uhu, and fighting broke out between the two. As a result in 1943 Kammhuber was transferred to Luftflotte 5 in Norway, in command of a handful of outdated planes. After the reorganization of the Luftwaffe in Scandinavia and the dissolution of Luftflotte 5, he became commanding general of the Luftwaffe in Norway (September–October 1944). In 1945 Kammhuber was re-appointed to command of the night fighters, at this point a largely ceremonial position considering the state of the Third Reich at that time.[1] 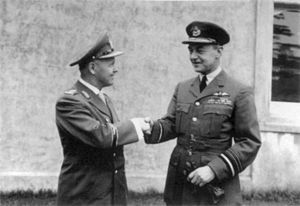 Meeting between Kammhuber and Air Marshal Sir Thomas Pike in 1956. Pike had previously served as an RAF night fighter pilot.

After the fall of the Reich in May 1945, Kammhuber was held by the United States, but he was released in April 1948 without charges being brought against him. He wrote a series of monographs for the US Department of Defense on the conduct of the German defenses against the RAF and USAAF. These were later collected into book form (listed under References). In 1953 he published a definitive work on what he learned during the war as Problems in the Conduct of a Day and Night Defensive Air War. He later spent time in Argentina, helping to train the air force under Juan Perón[citation needed].

Josef Kammhuber returned to Germany and joined the German Air Force while it was being formed. He was promoted to Inspekteur der Bundesluftwaffe, serving in that role between 1956 and 1962. After the 1961 F-84 Thunderstreak incident, when two West German Republic F-84F Thunderstreaks strayed into East German airspace and flew to West Berlin, Kammhuber and his superior, the West German Minister of Defence, Franz-Josef Strauß, removed Oberstleutnant Siegfried Barth, commander of the pilots' unit, from his command. After protests, three official investigations and a formal complaint by Barth against Strauß, the former was reinstated in his position.[7]