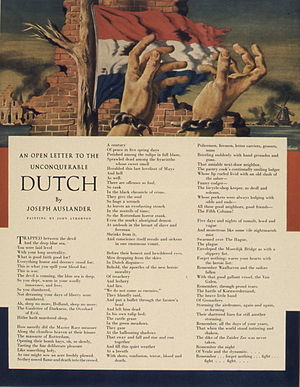 Joseph Auslander (11 October 1897, Philadelphia, Pennsylvania – 22 June 1965, Coral Gables, Florida) was an American poet, anthologist, translator of poems, and novelist. Auslander was appointed the first Poet Laureate Consultant in Poetry to the Library of Congress from 1937 and 1941.

Auslander was married to Audrey Wurdemann, a Pulitzer Prize winner in poetry;[1] they lived at 3117 35th Street Northwest, Washington, D.C., in the Cathedral Heights neighborhood.[2]

Their papers are held at the University of Miami.[3]