Görres was born at Koblenz. His father was moderately well off, and sent his son to a Latin college under the direction of the Roman Catholic clergy. The young Görres' sympathies were initially with the French Revolution, and the French exiles in the Rhineland confirmed his beliefs, which would then evolve over time. He harangued the revolutionary clubs, and insisted on the unity of interests which would ally all civilized states to one another.[citation needed] He began a republican journal called Das rote Blatt, and afterwards Rubezahl, in which he strongly condemned the administration of the Rhenish provinces by France.

After the Treaty of Campo Formio (1797) there was hope that the Rhenish provinces would be constituted into an independent republic. In 1799 the provinces sent an embassy, of which Görres was a member, to Paris to put their case before the directory. The embassy reached Paris on 20 November 1799; two days before this Napoleon had assumed power. After much delay he received the embassy; but the only answer they obtained was "that they might rely on perfect justice, and that the French government would never lose sight of their wants". Görres on his return published a tract called Resultate meiner Sendung nach Paris, in which he reviewed the history of the French Revolution. 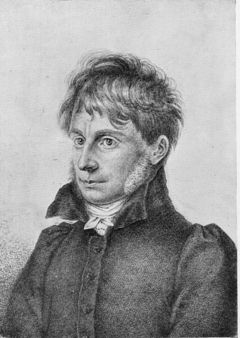 Lithograph by August Strixner, after a painting by Peter von Cornelius

During the thirteen years of Napoleon's dominion Görres lived a quiet life, devoting himself chiefly to art or science. In 1801 he married Catherine de Lasaulx, and for some years taught at a secondary school in Koblenz; in 1806 he moved to Heidelberg, where he lectured at the university. British lawyer and diarist Henry Crabb Robinson met Görres during this time. A quote from his diary:

Görres has the wildest physiognomy – looks like an overgrown old student. A faun-like nose and lips, fierce eyes, and locks as wild as Caliban’s. Strong sense, with a sort of sulky indifference toward others, are the characteristics of his manner.[1]

Klemens Brentano compared his appearance to that

[...] of an old lion shaking and pulling his mane caught in the bars of his cage.[2]

As a leading member of the Heidelberg Romantic group, he edited together with Brentano and Ludwig Achim von Arnim the Zeitung für Einsiedler (subsequently renamed Trost-Einsamkeit), and in 1807 he published Die deutschen Volksbücher (literally, The Books of the German People).

He returned to Koblenz in 1808, and again found occupation as a teacher in a secondary school, supported by civic funds. He now studied Persian, and in two years published a Mythengeschichte der asiatischen Welt (History of the Myths of the Asiatic World), which was followed ten years later by Das Heldenbuch von Iran (The Book of Heroes of Iran), a translation of part of the Shahnama, the epic of Firdousi.

Editor of the Merkur

In 1813 he again took up the cause of national independence, and in the following year founded Der rheinische Merkur. The outspokenness of its hostility to Napoleon made it influential, and Napoleon himself called it la cinquième puissance (the fifth power).[3] It campaigned for a united Germany, with a representative government, but under an emperor, Görres having abandoned his earlier advocacy of republicanism. When Napoleon was at Elba, Görres wrote an ironic imaginary proclamation issued by him to the people. He criticised the second peace of Paris (1815), declaring that Alsace and Lorraine should have been demanded back from France. 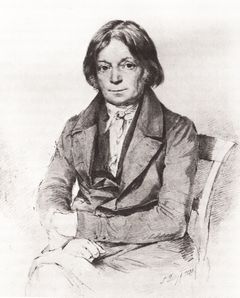 Stein used the Merkur at the time of the meeting of the congress of Vienna to give expression to his hopes. But Hardenberg, in May 1815, warned Görres to remember that he was not to arouse hostility against France, but only against Napoleon. There was also in the Merkur an antipathy to Prussia, expression of the desire that an Austrian prince should assume the imperial title, and also a tendency to liberalism—all distasteful to Hardenberg, and to his master Friedrich Wilhelm III. Görres disregarded warnings sent to him by the censorship, so that the Merkur was suppressed early in 1816, at the instance of the Prussian government; and soon after Görres was dismissed from his teaching post.[4]

He died 29 January 1848, the year of the fall of Metternich, and was buried in the Alter Südfriedhof in Munich. 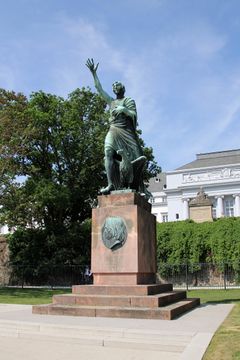 He supported himself by his pen, and he became a political pamphleteer. In the excitement which followed Kotzebue's assassination, the reactionary decrees of Carlsbad were framed, and these were the subject of Görres’ pamphlet Teutschland und die Revolution (“Germany and the Revolution”, 1820). In this work he reviewed the circumstances which had led to the murder of August von Kotzebue, and, while expressing horror at the deed itself, he urged that it was impossible and undesirable to repress the free utterance of public opinion. The success of the work was marked, despite a ponderous style. It was suppressed by the Prussian government, and orders were issued for the arrest of Görres and the seizure of his papers. He escaped to Strasbourg, and thence went to Switzerland.[5] Two more political tracts were Europa und die Revolution (“Europe and the Revolution”, 1821) and In Sachen der Rheinprovinzen und in eigener Angelegenheit (“In the matter of the Rhine Province and in a matter of my own”, 1822). In the former Gorres describes the moral, intellectual and political corruption of France in the course of the eighteenth century as the major cause which led to the revolution.[6]

In Görres’ pamphlet Die Heilige Allianz und die Völker auf dem Kongress zu Verona (“The Holy Alliance and the peoples represented at the congress of Verona”) he asserted that the princes had met together to crush the liberties of the people, and that the people must look elsewhere for help. The “elsewhere” was to Rome; and from this time Görres became an Ultramontane writer. He was summoned to Munich by King Ludwig of Bavaria as Professor of History in the university,[7] and there his writing enjoyed popularity. His Christliche Mystik (“On christian mysticism”, 1836–1842) gave a series of biographies of the saints, together with an exposition of Roman Catholic mysticism. But his most celebrated ultramontane work was a polemical one. Its occasion was the deposition and imprisonment by the Prussian government of the archbishop Clement Wenceslaus reportedly due to his refusal to sanction in certain instances the marriages of Protestants and Roman Catholics.[8]

Görres, in his Athanasius (1837), upheld the power of the church,[9] although liberals of later claimed he never insisted on the absolute supremacy of Rome.[citation needed] Athanasius went through several editions, and initiated a long and bitter controversy. In the Historisch-politische Blätter (“Historical-political pages”), a Munich journal, Görres and his son Guido (1805–1852) continued to uphold the claims of the church. On New Year's Day of 1839, Görres received the "Civil Order of Merit" from the king for his services.[10]

Görres studied mysticism while in Strasbourg. He went into the mystical writers of the Middle Ages such as Maria of Agreda as well as observing, partly in person, the ecstatic young women of his time (Maria von Mörl, and others); and strove to comprehend more thoroughly the nature of Christian mysticism. These studies led to his work Die christliche Mystik (4 vols., 1836–42; 2nd ed., 5 vols., 1879).