Juan Antonio Samaranch y Torelló, 1st Marquis of Samaranch (Catalan pronunciation: [ˈʒwan antɔˈnjɔ samaˈɾaŋk]; 17 July 1920 – 21 April 2010), was a Spanish sports administrator and minister of sports under the Franco-regime (1973-1977) who served as the seventh president of the International Olympic Committee (IOC) from 1980 to 2001.[1][2][3] Samaranch served the second longest term as the head of the IOC, the longest being that of Pierre de Coubertin (29 years).

Samaranch was born into a wealthy family in Barcelona. He studied at the local Swiss School and at the German School of Barcelona. As a child, he was a keen roller hockey player.[4] During the Spanish Civil War, he was conscripted into the Republican forces in 1938, at the age of 18, to serve as a medical orderly. However, he was politically opposed to the Republic, and escaped to France. He quickly returned to Nationalist Spain under Francisco Franco and enrolled in the Spanish fascist movement Falange.[5]

After the defeat of the Republic in 1939, Samaranch studied commerce at IESE Business School in Barcelona. He had a short career as a sports journalist for La Prensa, which ended in his dismissal in 1943 for criticizing the supporters of Real Madrid C.F. after that club's 11–1 defeat of FC Barcelona, and then joined his family's textile business. He joined the board of La Caixa, Spain's largest savings bank, in 1984, and served as President of the board from 1987 to 1999. He remained as honorary president from his retirement in 1999 to his death.[5]

Samaranch served on the municipal government of Barcelona, with responsibility for sports, from 1955 to 1962. He was a procurador (member of the lower house) of the Cortes Españolas during the last decade of the Franco regime, from 1964 until the restoration of democracy in 1977. From 1967 to 1971, he also served as "national delegate" (minister) for sports, and from 1973 to 1977 he was the president of the diputación (governing council) of the Province of Barcelona. He was appointed Spanish ambassador to the Soviet Union and Mongolia in 1977, immediately after the restoration of diplomatic relations between the countries: this post helped him to gain the support of the Soviet bloc countries in the election to the presidency of the IOC, held in Moscow in 1980.[5] 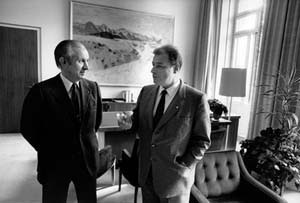 During his term, Samaranch made the Olympic Games financially healthy, with big television deals and sponsorships. Although the 1984 Summer Olympics were still boycotted by the Soviet bloc, the number of IOC participating member nations increased at every Games during Samaranch's presidency. Samaranch also wanted the best athletes to compete in the Olympics, which led to the gradual acceptance of professional athletes.

One achievement of Samaranch was the financial rescue of the IOC, which was in financial crisis in the 1970s. The games themselves were such a burden on host cities that it appeared that no host would be found for future Olympiads. Under Samaranch, the IOC revamped its sponsorship arrangements (choosing to go with global sponsors rather than allowing each national federation to take local ones), and new broadcasting deals, commercialising the Olympics and making them more economically viable.[7]

He was awarded the 1990 Seoul Peace Prize.

It became a tradition for Samaranch, when giving the President's address at the close of each Summer Olympics, to praise the organizers at each Olympiad for putting on "the best ever" Games. He withheld this phrase only once, at the 1996 Summer Olympics in Atlanta[8] where the organization had come under heavy criticism.[9]

In the aftermath of a bribery scandal surrounding the 2002 Winter Olympics in Salt Lake City, Utah, an inquiry held in camera expelled several IOC members, but cleared Samaranch of wrongdoing. Samaranch set up a commission to investigate the corruption and introduced reform of the bid process as a result of the scandal.[7]

In 2001, Samaranch did not apply for the presidency again. He was succeeded by Jacques Rogge. He then became Honorary President for Life of the International Olympic Committee. Samaranch served the second longest term as the head of the IOC, 21 years, the longest being that of Pierre de Coubertin (29 years). Following his retirement, Samaranch played a major role in Madrid's bid for the 2012 and 2016 Olympics, though both were unsuccessful. In 1991, he was raised into the Spanish nobility by King Juan Carlos of Spain and given the hereditary title of Marqués de Samaranch (Marquis of Samaranch), this in recognition of his contribution to the Olympic movement.[7][10]

According to the book The KGB Plays Chess (Boris Gulko, Korchnoi, Vladimir Popow and Juri Felschtinski), Samaranch was recruited as an asset by the KGB in exchange for Soviet support for his candidacy as MOK President.

Samaranch married María Teresa Salisachs Rowe, known as "Bibí" (26 December 1931 – 16 September 2000), on 1 December 1955. She died in Spain while he was attending the 2000 Summer Olympics in Sydney. Two children were born of this marriage: his eldest child and daughter, María Teresa Samaranch Salisachs (born 1956), has been president of the Spanish Federation of Sports on Ice since 2005,[5] while his youngest child and son, Juan Antonio Samaranch Salisachs (born 1959), has been a member of the International Olympic Committee since 2001. 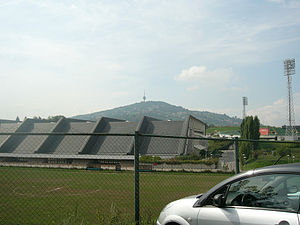 Samaranch died of cardio-respiratory failure in the Hospital Quirón in Barcelona on 21 April 2010, having suffered ill health for several years prior to his death.[11]

As a recipient of the Gold Medal of the Generalitat of Catalonia, Samaranch was laid in state in the Palau de la Generalitat. His funeral mass was in the Cathedral of Santa Eulalia, on 22 April 2010 and was attended by representatives of the Spanish royal family and of the Olympic movement.[11][12][13] He was buried at the Montjuïc Cemetery.[13] After his death, in June 2010 the Olympic and Sports Museum Joan Antoni Samaranch and the Olympic Hall Juan Antonio Samaranch, formerly Olympic Hall Zetra, in Sarajevo were renamed in his honour.