From Infogalactic: the planetary knowledge core
Jump to: navigation, search
This article is about the capital of South Sudan. For other uses, see Juba (disambiguation). 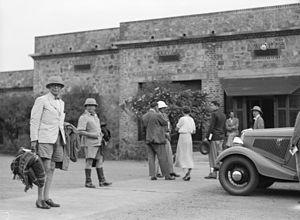 Juba /ˈdʒuːbə/[1] (Arabic: جوبا‎‎) is the capital and largest city of the Republic of South Sudan. It also serves as the capital of Central Equatoria, one of the ten states of South Sudan. The city is situated on the White Nile and functions as the seat and metropolis of Juba County.

In the 19th century, a trading post and a mission, called Gondokoro, was located in the vicinity of Juba. It was the southernmost outpost of the Egyptian garrison, supported by a handful of soldiers, mostly ill due to the malaria and blackwater fever that was dominant in the region. Gondokoro was also the base of the explorers and campaigners (Sir) Samuel and Florence Baker during their expeditions to what is now South Sudan and northern Uganda from 1863 to 1865, and from 1871 to 1873.[2]

Juba itself was established in 1922 as a small town by a number of Greek traders which were mostly supplying the British Army at the time. Although their number never exceeded 2,000 inhabitants, together with a much larger number of the native Bari tribe with whom they had an excellent relationship, the Greeks contributed in what is today visible structures downtown Juba Market area as well as the Greek Quarters (named by the British), a small suburb which today is called Hai Jalaba. Examples of the development by the Greeks are public buildings such as the beautiful stone buildings of Ivory Bank, Notos Lounge, the old Sudan Airways Building, Paradise Hotel, Nile Commercial Bank and Buffalo Commercial Bank, among others. The building of Central Bank was also built at a later stage in the mid '40s as well as the famous Juba Hotel in the mid '30s.[3]

Until 1956, Juba was in the Anglo-Egyptian Sudan which was jointly administered by the United Kingdom and Egypt. British hopes to join the southern part of Sudan with Uganda were dashed in 1947 by an agreement in Juba, also known as the Juba Conference, to unify northern and southern Sudan. In 1955, a mutiny of southern soldiers in Torit town sparked the First Sudanese Civil War, which did not end until 1972. During the Second Sudanese Civil War, Juba was a strategic location that was the focus of much fighting.[citation needed]

In 2005, Juba became the interim seat and the capital of the Autonomous Government of Southern Sudan, although the proposed interim capital before the signing of the Comprehensive Peace Agreement was Rumbek. With the advent of peace, the United Nations increased its presence in Juba, whereas many Southern Sudan operations had until that time been managed from Kenya. Under the leadership of the United Nations Office for the Coordination of Humanitarian Affairs, the United Nations established a camp known as "OCHA Camp", which served as a base for many United Nations agencies and non-governmental organizations.[citation needed]

Juba became the world's newest national capital on 9 July 2011, when South Sudan formally declared its independence from the Republic of the Sudan. However, the South Sudanese government and others have expressed dissatisfaction with the city's suitability as a national capital, and the government studied a proposal that would see a new planned city built as a replacement capital elsewhere, most likely Ramciel in Lakes.[4]

On 5 September 2011, the government announced the capital would indeed move some 250 km away from Juba to Ramciel, which is situated at the middle of South Sudan and about 60 km from Yirol West County of Lakes state.

Juba is led by a city council headed by Mayor Mohammed El Haj Baballa. This council was formed in March 2011 and Baballa appointed to lead it by Governor Clement Wani Konga. Former Yei County Commissioner David Lokonga Moses was appointed as deputy mayor. A ministerial committee to keep Juba clean and sanitary was also created by gubernatorial decree at the same time.[5]

Prior to March 2011, the area now administered by Juba City Council was divided into Juba, Kator, and Muniki payams. It is now a standalone subdivision of Juba County,[5] of which it is the county seat.[6] 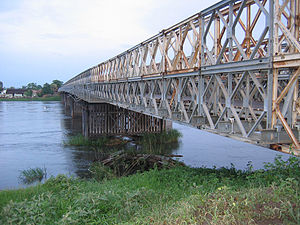 The city is a river port and the southern terminus of traffic along the Nile, properly called the Bahr al Jabal section of the White Nile. Before the civil war, Juba was also a transport hub, with highways connecting it to Kenya, Uganda and the Democratic Republic of the Congo.

Because of the war Juba can hardly be called a transport hub anymore. Roads and the river harbour are currently not in use due to disrepair. The United Nations and the South Sudanese government are repairing the roads, but full repair is expected to take many years. In 2003, the Swiss Foundation for Mine Action (FSD) started to clear the roads leading from Juba to Uganda and Kenya. It was expected that these roads would be completely de-mined and rebuilt in the course of 2006–2008.[citation needed] The rebuilding of the roads, which are mostly un-paved, takes a tremendous amount of effort and time because of the limited work season due to the lengthy rainy season, which lasts from March until October. The roads are important for the peace process in Sudan as people need them to return to their homes and to regain what they feel is a normal life. The first road that has started to be rebuilt is the road to Uganda. This road is particularly important, as many of the original inhabitants of Juba fled to Uganda during the war. As of 2009[update], there are three paved roads in Juba, one which was re-surfaced in July. The main one is a concrete road, built by the British in the 1950s.[citation needed]

Between 2008 and 2011, the Ugandan government and the South Sudanese government undertook joint efforts to develop a railway link between the Northern Ugandan city of Gulu and Juba, with an extension to Wau. A memorandum of understanding between the two governments was signed to that effect in August 2008.[7] The same memorandum outlined plans to develop the road network between the two countries. Recent media reports from the region suggest that the railway link from Juba may link directly with Kenya, bypassing Uganda.[8]

The city's growth in the months and years leading up to independence has been described as "chaotic".[4]

In 2005, Juba's population was 163,442. Based on analysis of aerial photos, the best estimate of several donors working in Juba calculated the 2006 population at approximately 250,000. The 5th Sudan Population and Housing Census took place in April/May 2008, stating the population of Juba County to be 372,413 (the majority residing in Juba City, which dominates the county), but the results were rejected by the Autonomous Government of Southern Sudan.[9] Juba is developing very rapidly due to oil money and the Chinese coming for work and development.[citation needed] In 2011, the population of the city of Juba is estimated at approximately 372,410, but may potentially be more.[10] As of 2013, the city's population was growing at a rate of 4.23%.[11]

Juba has been described as undergoing an economic boom, especially in the past five years and since independence.[citation needed] The prospect of an economic boom has brought thousands of merchants to Juba, mostly from northern Sudan and from East Africa. As of October 2010[update], several regional and international businesses have established a presence in Juba. The Commercial Bank of Ethiopia and the Kenyan banking conglomerate Kenya Commercial Bank has its South Sudanese headquarters in the city and a branch network of eleven (11) branches throughout South Sudan.[13] The three indigenous South Sudanese commercial banks namely; Buffalo Commercial Bank, Ivory Bank and Nile Commercial Bank, all maintain their headquarters in Juba. Equity Bank, another regional finance services provider also has a branch in Juba. National Insurance Corporation (NIC), the leading Ugandan insurance services provider, maintains an office in the city.[14] Despite recent economic difficulties brought about by the December 15th 2013 civil war, Juba has continued to grow and construction is still booming. This is probably due to the high demand for affordable housing and hotel accommodations. Research from the Overseas Development Institute found that markets in Juba are transient, as many traders only come to make a quick profit and so do not invest in storage facilities or shops.[15]

Juba has a tropical wet and dry climate (Köppen: Aw),[16] and as it lies near the equator, temperatures are hot year-round. However, little rain falls from November to March, which is also the time of the year with the hottest maximum temperatures, reaching 38 °C (100 °F) in February. From April to October, more than 100 millimetres (3.9 in) of rain falls per month. The annual total precipitation is nearly 1,000 mm (39 in).

On 4 November 2015, a cargo plane, en route to the Paloch oil fields in Upper Nile state, crashed directly after takeoff one-half mile from Juba's international airport, killing over 40 people, mostly oil workers and their family members. A child and an adult survived. The Antonov An-12 (or 12-B) cargo plane, made in the Ukraine for Russia in 1971, landed in a farming community on the eastern bank of the White Nile River. The plane, built for moving cargo, was operated by Allied Services Limited, a logistics company based in South Sudan. The crew may be considered heroes: A man who saw the plane come down told AP he thought it might crash into a market area, but the pilot seemed to divert it at the last minute.[21]