Judenrat (plural: Judenräte; German for "Jewish council") was a widely used administrative agency imposed by Nazi Germany during World War II, predominantly within the ghettos in Nazi-occupied Europe, and the Jewish ghettos in German-occupied Poland. The Nazi German administration required Jews to form a Judenrat in every community across the occupied territories.[1]

The Judenrat constituted a form of self-enforcing intermediary, used by the Nazi administration to control larger Jewish communities in occupied areas. The Germans also implemented the name Jewish Council of Elders (Jüdischen Ältestenrat or Ältestenrat der Juden) in some ghettos, as in the Łódź Ghetto, and in Theresienstadt or in the Bergen-Belsen concentration camp.[2][3] While the history of the term Judenrat itself is unclear, Jewish communities themselves had established councils for self-government as far back as the Medieval Era. While the Hebrew term of Kahal (קהל) or Kehillah (קהילה) was used by the Jewish community, German authorities generally tended to use the term Judenräte.

The structure and missions of the Judenräte under the Nazi regime varied widely, often depending upon whether meant for a single ghetto, a city or a whole region. Jurisdiction over a whole country, as in Nazi Germany, was maintained by Reichsvereinigung der Juden in Deutschland (Reich's Association of the Jews in Germany) established on 4 July 1939.[4]

In the beginning of April 1933, shortly after the National Socialist government took power, a report by a German governmental commission was presented on fighting the Jews. This report recommended the creation of a recognized 'Association of Jews in Germany' (Verband der Juden in Deutschland), to which all Jews in Germany would be forced to associate. Then, appointed by the Reichskanzler, a German People's Ward was to assume responsibility of this group. As the leading Jewish organization, it was envisioned that this association would have a 25-member council called the Judenrat. However, the report was not officially acted upon.

The Israeli historian Dan Michman found it likely that the commission, which considered the legal status and interactions of Jews and non-Jews before their emancipation, reached back to the Medieval Era for the term Judenräte. This illuminates the apparent intent to make the Jewish emancipation and assimilation invalid, and so return Jews to the status they held during the Medieval Era. 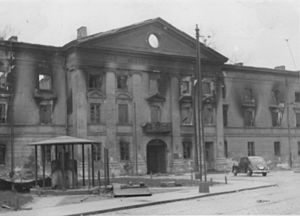 The building of the Jewish Council in Warsaw, burned during the Warsaw Ghetto Uprising

The first actual Judenräte were established in occupied Poland by Reinhard Heydrich's orders on 21 September 1939, soon after the end of the German assault on Poland and later the occupied territories of the Soviet Union.[1]

The Judenräte were to serve as a means to enforce the occupation force's anti-Jewish regulations and laws in the western and central areas of Poland, and had no authority of their own. Ideally, a local Judenrat was to include Rabbis and other influential people of their local Jewish community. Thus, enforcement of laws could be better facilitated by the German authorities by using established Jewish authority figures and personages, while undermining external influences.

Further Judenräte were established on 18 November 1939, upon the orders of Hans Frank, head of the Generalgouvernment. These councils were to have 12 members for Jewish communities of 10,000 or less, and up to 24 members for larger Jewish communities. Jewish communities were to elect their own councils, and by the end of 1939 were to have selected an executive and assistant executive as well. Results were to be presented to the German city or county controlling officer for recognition. While theoretically democratic, in reality the councils were often determined by the occupiers. While the German occupiers only minimally involved themselves in the voting, those whom the Germans first chose often refused participation to avoid becoming exploited by the occupiers. As a rule, therefore, the traditional speaker of the community was named and elected, preserving the community continuity.

The Nazis systematically sought to weaken the resistance potential and opportunities of the Jews of Eastern Europe. The early Judenräte were foremost to report numbers of their Jewish populations, clear residences and turn them over, present workers for forced labour, confiscate valuables, and collect tribute and turn these over. Failure to comply would incur the risk of collective punishments or other measures. Later tasks of the Judenräte included turning over community members for deportation.

Through these occupation measures, and the simultaneous prevention of government services, the Jewish communities suffered serious shortages. For this reason, early Judenräte attempted to establish replacement service institutions of their own. They tried to organize food distribution, aid stations, old age homes, orphanages and schools. At the same time, given their restricted circumstances and remaining options, they attempted to work against the occupier's forced measures and to win time. One way was to delay transfer and implementation of orders and to try playing conflicting demands of competing German interests against each other. They presented their efforts as indispensable for the Germans in managing the Jewish community, in order to improve the resources of the Jews and to move the Germans to repeal collective punishments.

This had, however, very limited positive results. The generally-difficult situations presented often led to perceived unfair actions, such as personality preferences, sycophancy, and protectionism of a few over the rest of the community. Thus, the members of the community quickly became highly critical of, or even outright opposed their Judenrat.

Judenräte were responsible for the internal administration of ghettos, standing between the Nazi occupiers and their Jewish communities. In general, the Judenräte represented the elite from their Jewish communities. Often, a Judenrat had a group for internal security and control, a Jewish Ordnungspolizei. They also attempted to manage the government services normally found in a city such as those named above. However, the requirements of the Nazis to deliver community members to forced labor, deportation or Nazi concentration camps placed them in the position of helping the occupiers. To resist such actions or orders was to risk summary execution or inclusion in the next concentration camp shipment, with a quick replacement.

The role of the Judenräte in the Holocaust

Hannah Arendt stated in her 1963 book Eichmann in Jerusalem that without the assistance of the Judenräte, the registration of the Jews, their concentration in ghettos and, later, their active assistance in the Jews' deportation to extermination camps, many fewer Jews would have perished because the Germans would have encountered considerable difficulties in drawing up lists of Jews. In occupied Europe, the Nazis entrusted Jewish officials with the task of making such lists of Jews along with information about the property they owned. The Judenräte also directed the Jewish police to assist the Germans in catching Jews and loading them onto transport trains leaving for Nazi concentration camps.

In her book, Arendt wrote that: "To a Jew, this role of the Jewish leaders in the destruction of their own people is undoubtedly the darkest chapter of the whole dark story. [...] In the matter of cooperation, there was no distinction between the highly assimilated Jewish communities of Central and Western Europe and the Yiddish-speaking masses of the East. In Amsterdam as in Warsaw, in Berlin as in Budapest, Jewish officials could be trusted to compile the lists of persons and of their property..."[5]

Arendt's view has been challenged by other historians of the Holocaust, including Isaiah Trunk in his book Judenrat: The Jewish Councils in Eastern Europe Under Nazi Occupation (1972). Summarising Trunk's research, Holocaust scholar Michael Berenbaum has written: "In the final analysis, the Judenräte had no influence on the frightful outcome of the Holocaust; the Nazi extermination machine was alone responsible for the tragedy, and the Jews in the occupied territories, most especially Poland, were far too powerless to prevent it."[6]