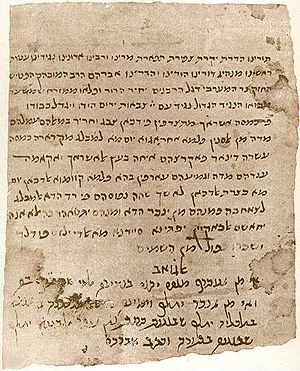 A page from the Cairo Geniza, part of which is written in the Judeo-Arabic language

The Judeo-Arabic languages (Arabic: عربية يهودية‎‎, Hebrew: ערבית יהודית‎) are a continuum of Arabic dialects spoken by Jews living or formerly living in the Arab world; the term also refers more or less to Classical Arabic written in the Hebrew script, particularly in the Middle Ages. Just as with the rest of the Arab world, Jews had different dialects depending on where they lived. This phenomenon may be compared to cases such as different forms of Yiddish such as Western Yiddish and Eastern Yiddish, or forms of Ladino (Judeo-Spanish) in areas such as the Balkans, Thessaloníki/Istanbul, Morocco, etc. Many significant Jewish works, including a number of religious writings by Maimonides and Judah Halevi, were originally written in Judeo-Arabic, as this was the primary colloquial language of their authors.

The Arabic spoken by Jewish communities in the Arab world differed slightly from the Arabic of their non-Jewish neighbours.[citation needed] These differences were partly due to the incorporation of some words from Hebrew and other languages and partly geographical, in a way that may reflect a history of migration.[citation needed] For example, the Judeo-Arabic of Egypt, including in the Cairo community, resembled the dialect of Alexandria rather than that of Cairo (Blau).[2] Similarly the Jewish Iraqi Arabic of Baghdad was found reminiscent of the dialect of Mosul.[3] Many Jews in Arab countries were bilingual in Judeo-Arabic and the local dialect of the Muslim majority.[citation needed]

Like other Jewish languages and dialects, Judeo-Arabic languages contain borrowings from Hebrew and Aramaic. This feature is less marked in the traditional Judeo-Arabic translations of the Bible, as the authors clearly took the view that the business of a translator is to translate.[4]

Jews in Muslim countries wrote—sometimes in their dialects, sometimes in a more classical style—in a mildly adapted Hebrew script (rather than using Arabic script), often including consonant dots from the Arabic alphabet to accommodate phonemes that did not exist in the Hebrew alphabet.

Some of the most important books of medieval Jewish thought were originally written in medieval Judeo-Arabic, as well as certain halakhic works and biblical commentaries. Only later were they translated into medieval Hebrew so that they could be read by the Ashkenazi Jews of Europe. These include:

Most communities also had a traditional translation of the Bible into Judeo-Arabic, known as a sharħ ("meaning"): for more detail, see Bible translations (Arabic). The term sharħ sometimes came to mean "Judeo-Arabic" as such, in the same way that "Targum" was sometimes used to mean Aramaic.

In the years following the 1948 Arab–Israeli War and the independence of Algeria, Morocco and Tunisia, most Mizrahi and Sephardi Jews in Arab countries left for mainly France and Israel. Their distinct Arabic dialects in turn did not thrive in either country, and most of their descendants now speak French or Modern Hebrew almost exclusively; thus resulting in the entire continuum of Judeo-Arabic dialects being considered endangered languages.[citation needed] This stands in stark contrast with the historical status of Judeo-Arabic: in the early Middle Ages the speakers of Judeo-Arabic far outnumbered the speakers of Yiddish. There remain small populations of speakers in Morocco, Tunisia, Lebanon, Yemen, Israel and the United States.