The Judiciary Act of 1789 (ch. 20, 1 Stat. 73) was a United States federal statute adopted on September 24, 1789, in the first session of the First United States Congress. It established the federal judiciary of the United States.[2][3][4][5] Article III, Section 1 of the Constitution prescribed that the "judicial power of the United States, shall be vested in one supreme Court, and such inferior Courts" as Congress saw fit to establish. It made no provision for the composition or procedures of any of the courts, leaving this to Congress to decide.[6]

The existence of a separate federal judiciary had been controversial during the debates over the ratification of the Constitution. Anti-Federalists had denounced the judicial power as a potential instrument of national tyranny. Indeed, of the ten amendments that eventually became the Bill of Rights, five (the fourth through the eighth) dealt primarily with judicial proceedings. Even after ratification, some opponents of a strong judiciary urged that the federal court system be limited to a Supreme Court and perhaps local admiralty judges. The Congress, however, decided to establish a system of federal trial courts with broader jurisdiction, thereby creating an arm for enforcement of national laws within each state.

Senator Richard Henry Lee (AA-Virginia) reported the judiciary bill out of committee on June 12, 1789;[1] Oliver Ellsworth of Connecticut was its chief author.[7] The bill passed the Senate 14–6 on July 17, 1789, and the House of Representatives then debated the bill in July and August 1789. The House passed an amended bill 37–16 on September 17, 1789. The Senate struck four of the House amendments and approved the remaining provisions on September 19, 1789. The House passed the Senate's final version of the bill on September 21, 1789. U.S. President George Washington signed the Act into law on September 24, 1789.[2]

Provisions of the Act 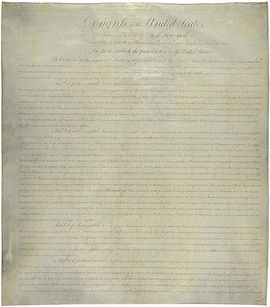 The first page of the Judiciary Act of 1789

The Act set the number of Supreme Court justices at six: one Chief Justice and five Associate Justices.[8] The Supreme Court was given exclusive original jurisdiction over all civil actions between states, or between a state and the United States, as well as over all suits and proceedings brought against ambassadors and other diplomatic personnel; and original, but not exclusive, jurisdiction over all other cases in which a state was a party and any cases brought by an ambassador. The Court was given appellate jurisdiction over decisions of the federal circuit courts as well as decisions by state courts holding invalid any statute or treaty of the United States; or holding valid any state law or practice that was challenged as being inconsistent with the federal constitution, treaties, or laws; or rejecting any claim made by a party under a provision of the federal constitution, treaties, or laws.[1]

SECTION 1. Be it enacted by the Senate and House of Representatives of the United States of America in Congress assembled, That the supreme court of the United States shall consist of a chief justice and five associate justices, any four of whom shall be a quorum, and shall hold annually at the seat of government two sessions, the one commencing the first Monday of February, and the other the first Monday of August. (bold added) 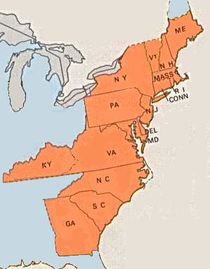 Congress authorized all people to either represent themselves or to be represented by another person. The Act did not prohibit paying a representative to appear in court.

Congress authorized persons who were sued by citizens of another state, in the courts of the plaintiff's home state, to remove the lawsuit to the federal circuit court. The power of removal, and the Supreme Court's power to review state court decisions where federal law was at issue, established that the federal judicial power would be superior to that of the states.

The Judiciary Act of 1789 included the Alien Tort Statute, now codified as 28 U.S.C. § 1350, which provides jurisdiction in the district courts over lawsuits by aliens for torts in violation of the law of nations or treaties of the United States.[9]

First justices of the Supreme Court

The first six persons to serve on the United States Supreme Court (ordered by seniority) were: