Betty May "Julie" Adams (born October 17, 1926) is an American actress. She was sometimes credited as Julia Adams or Betty Adams.

Adams was born in Waterloo, Iowa. Her family moved a great deal; the longest she lived in one town was eight years in Blytheville, Arkansas. Adams worked as a part-time secretary and began her film career in B-movie westerns. In 1946, at the age of 19, she was crowned "Miss Little Rock" and then moved to Hollywood, California to pursue her acting career.[1] 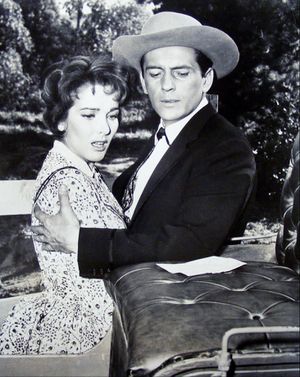 She used her real name until 1949, when she began working for Universal Pictures, the same studio where she met unknown stars such as Piper Laurie and Tony Curtis.[2] She then became "Julia" and eventually "Julie". In 1954, she explained the latter change, "The studio picked Julia, but I never have felt comfortable with it. I just like the name Julie better, and the studio has given me permission to make the change."[3]

Her first movie role was a minor part in Red, Hot and Blue (1949), followed by a leading role in the Lippert western The Dalton Gang (1949). Adams was featured as the bathing beauty Kay Lawrence in 1954's Creature from the Black Lagoon.[4]

Adams co-starred in 1950s films opposite some of Hollywood's top leading men, including with James Stewart in 1952's Bend of the River, with Rock Hudson in The Lawless Breed (1953), with Tyrone Power in The Mississippi Gambler (1953), with Glenn Ford in The Man from the Alamo (1953), with Charlton Heston in The Private War of Major Benson (1955), with Dan Duryea in Slaughter on Tenth Avenue (1957) and with Joel McCrea in The Gunfight at Dodge City (1959).

In 1955, Adams co-starred with Rory Calhoun, subsequently of the CBS western television series, The Texan, in the film The Looters, the story of a plane crash in the Rocky Mountains. Part of the picture was filmed about Tarryall Creek at what is now Eleven Mile State Park in Park County in central Colorado. The advertising poster reads: "Five desperate men ... and a girl who didn't care ... trapped on a mountain of gale-lashed rock!"[5] 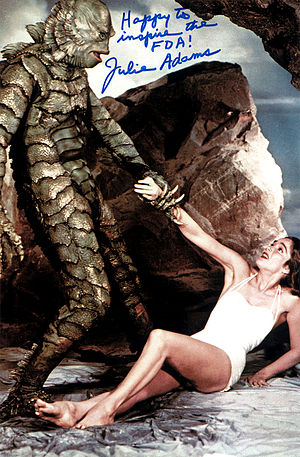 She appeared in the musical-comedy Tickle Me starring Elvis Presley in 1965. She thought highly of her co-star, noting: "Despite his status as a superstar singer and stage performer, Elvis took his acting very seriously. He was always prepared, and did a good job in the roles he was given. When he did his musical numbers in Tickle Me, sometimes walking from table to table in a nightclub set, he did them perfectly in one take."[6]

On television in 1962, Adams portrayed Mary Simpson, a county nurse and romantic interest of Sheriff Andy Taylor on The Andy Griffith Show. She also made four guest appearances on Perry Mason; the most memorable was the 1963 episode, "The Case of the Deadly Verdict," when she played Janice Barton, Perry's only convicted client during the show's nine-year run on CBS. In 1965, she played the role of defendant Pat Kean in "The Case of the Fatal Fortune." Adams appeared on The Rifleman as a dubious vixen and romantic interest of lead character Chuck Connors. She guest-starred in five episodes of 77 Sunset Strip, on Alfred Hitchcock Presents three times, and on Maverick twice.[5]

More guest-star roles in popular TV series followed, including McMillan & Wife, Police Woman, The Streets of San Francisco, Cannon, Quincy, M.E., and Cagney & Lacey. Adams co-starred with James Stewart in The Jimmy Stewart Show on NBC in 1971-1972. Stewart played a professor, and Adams played his wife.[7] She was cast in the recurring role of real estate agent Eve Simpson for ten episodes of CBS's Murder, She Wrote.[4]

Adams played Paula Denning, the evil, conniving wife of Senator Mark Denning (Ed Nelson) on Capitol, a soap opera which ran on CBS from 1982 to 1987. While she claimed to have agoraphobia and to never leave her luxurious home in the fictional Washington, D.C. suburb of Jeffersonia, she was able to slip out unnoticed from time-to-time and even used her supposed affliction to cover a murder. After Paula recovered from a brain tumor, she continued to remain a trouble-maker, even writing a tell-all expose of the older generations of the soap's core families and even kidnapped ex-husband Mark in order to keep him from marrying Clarissa McCandless, the woman she had earlier shot in cold blood.[5] One memorable sequence had the middle-aged Paula having a cat-fight with old pal Myrna Clegg (Marj Dusay) after her deceptions over the tell-all book were revealed.

In her final months on the show, Paula mellowed into a typically concerned mother, worried that her daughter Sloane was in danger by becoming queen of a fictional Arab nation while enemies of her supposed late husband plotted to execute her. Her work on the soap opera reunited her with several former film co-stars, including Rory Calhoun and Richard Egan.

Adams (along with her son, Mitchell) has authored a book on her life and career, The Lucky Southern Star: Reflections From The Black Lagoon, which was published in 2011 and is currently available via her website. The autobiography has received both public and critical acclaim, with noted movie critic Leonard Maltin praising it on his indiewire.com Blog as, "A charming memoir by longtime leading lady Julie Adams." On the Amazon.com website, the book is currently rated 4.5 out of 5 stars. A limited test print run (100 copies) - with a bonus interview DVD - of the audiobook version has now been completed. Future sales and distribution are pending through her son Mitch, who also serves as producer.

Adams continues to be busy via making special guest appearances and meeting her fans. In August 2012, she was a guest of honor at the Los Angeles Comic Book and Science Fiction Convention held at the Shrine Auditorium (she attended the same convention in May 2012). She also appeared at the CineCon Classic Film Festival on August 31, 2012 at the Loews Hollywood Hotel. She was a scheduled guest at The Hollywood Show in Chicago from September 7–9, 2012. An additional book signing was held at Century Books in Pasadena, California, on September 20, 2012. On October 13, 2012, she was back in Berwyn, Illinois for a book signing party.

The Academy of Motion Picture Arts and Sciences selected Creature from the Black Lagoon as one of 13 classic horror films to screen during October, 2012, in order to celebrate the 100th anniversary of Universal Pictures. The film was shown (in 3D format) on October 16 at the Samuel Goldwyn Theater in Beverly Hills, California.[8] After the screening, Adams appeared on stage for a Q&A session where she shared personal memories of her role in the film, as well as several other projects she had worked on over her long career.

Adams was married to screenwriter Leonard B. Stern from 1951 to 1953.[9] Another source says they married in Santa Monica, California in December 1950, and divorced in the same city on October 13, 1953.[10] She was then married to actor-director Ray Danton from 1954; another source says they married in February 1955[11] and divorced in 1981. They had two sons: Steven Danton, an assistant director, and Mitchell Danton, an editor.[12][13]

In 1999, Adams received a Golden Boot award for her work in Westerns. She was inducted into the Arkansas Entertainers Hall of Fame in 2000. At CineCon in 2011, Julie was honored with a Film Career Achievement Award. In 2012, she won the Rondo Award for the Monster Kid Hall of Fame at the annual Wonderfest in Louisville, Kentucky.