From Infogalactic: the planetary knowledge core
Jump to: navigation, search
The Jungle Book

Jungle Book is a 1942 independent American Technicolor action-adventure film by the Hungarian Korda brothers, based on a screenplay adaptation by Laurence Stallings of the Rudyard Kipling, The Jungle Book about a wild boy who is kidnapped by human villagers that are cruel to animals as they attempt to steal the jungle's lost treasure. The film was directed by Zoltán Korda, produced by his brother Alexander and art directed by their younger brother Vincent. The cinematography was by Lee Garmes and W. Howard Greene and music by Miklós Rózsa. The film starred Sabu Dastagir as Mowgli. Because of the war, the British Korda brothers had moved their film making to Hollywood in 1940, and Jungle Book is one of the films they made during that Hollywood period.[4]

In an Indian village, Buldeo, an elderly storyteller, is paid by a visiting British memsahib to tell a story of his youth. He speaks of the animals of the jungle and of the ever-present threats to human life posed by the jungle itself. He then recalls his early life:

As a younger man he dreams that his village could one day become an important town and that the jungle could be conquered. However, when he is speaking about these dreams, an attack by Shere Khan, the tiger, leads to the death of a man and the loss of the man's child. The child is adopted by wolves in the jungle and grows to be the wild youth Mowgli. Years later, Mowgli is captured by the villagers and taken in by his mother Messua, though she does not recognize him as her lost child. He learns to speak and tries to imitate the ways of men, as well as becomes friendly with Buldeo's daughter, Mahala – much to Buldeo's distress, since he is convinced that the wild Mowgli is dangerous. When Mowgli and Mahala explore the jungle, they discover a hidden chamber in a ruined palace, containing fabulous wealth. Warned by an aged cobra that the wealth brings death, they leave, but Mahala takes one coin as a memento. When Buldeo sees the coin, he tries to force Mowgli to tell him where the treasure is, but Mowgli refuses. Buldeo resolves to follow Mowgli to the site of the treasure.

Later Mowgli fights and kills Shere Khan, with some last minute help from Kaa, the python. As he is skinning the body, Buldeo arrives. He threatens Mowgli with a gun, but is attacked by Mowgli's friend Bagheera, the black panther. Buldeo becomes convinced that Bagheera is Mowgli himself, shape-shifted into panther form. He tells the villagers that Mowgli is a witch, as is his mother. Mowgli is chained up and threatened with death, but escapes with his mother's help. However, she and another villager who tries to defend her are tied up and themselves threatened with burning for witchcraft.

Mowgli is followed by the greedy Buldeo and two friends, a priest and a barber, to the lost city. They find the treasure (including a golden elephant goad with a big ruby intact) and leave for the village with as much as they can carry. But when they stop for the night, the priest tries to steal a jewel-encrusted axe from the barber's share and murders him when the barber wakes up. The priest unconvincingly tells Buldeo that the barber had attacked him and that he had killed in self-defense, but Buldeo knows better. The next day, the priest attacks Buldeo while his back is turned, but Buldeo knocks him into the swamp where he is killed by a crocodile. Mowgli, who'd been trailing the men, tells Bagheera to chase Buldeo, the sole survivor, from the jungle, and Buldeo flees for his life, jettisoning the treasure he'd been carrying.

Enraged and maddened, Buldeo tries to murder Mowgli and even the jungle itself, by starting a forest fire. The fire rages, but the wind turns and threatens the village. The villagers flee, but Mowgli's mother and her defender are trapped. Mowgli brings the elephants to the village and breaks open the building, escaping to the river with his mother, Mahala and other villagers. He is invited to follow them to a new life downriver, but refuses to leave the jungle, turning back to help animals trapped by the fire.

The scene returns to the present day, with the elderly Buldeo telling his story and admitting that the jungle defeated his youthful dreams. When asked what became of Mowgli and his daughter, as well as how he escaped from the fire himself, he looks into the camera and says that is another story. 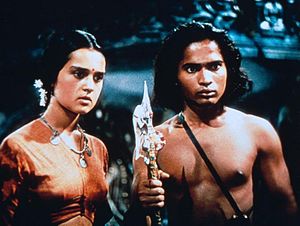 In 1940, the three Korda brothers left London for Hollywood, where two of their films that had begun production in the UK were completed: The Thief of Bagdad and That Hamilton Woman.

Laurence Stalling's adaptation was criticised for straying too far from the original, as well as the frequent disagreements between brothers Alexander and Zoltán did not help matters. Zoltán wanted an underplayed realistic story, while Alex favoured an exuberant fantasist epic. Alex, as always, got his way in the end.[4]

The film was a notable success at the box office.[5]

The film was nominated for four Academy Awards.[6][7]

In 1943 the film's score, in a recording made directly from the soundtrack, was released on a 78-RPM record album with narration by Sabu, the film's star, added. It became the first commercial recording of a non-musical U.S. film's orchestral score to be released. The album was a success.[8][9]

Although the film is in the public domain, the master 35MM elements are with ITV Global Entertainment Ltd.. An official video release is currently available via The Criterion Collection.