Juniata College is a private liberal arts college in Huntingdon, Pennsylvania, United States. Founded in 1876 as a co-educational school, it was the first college started by the Church of the Brethren. Today, Juniata has about 1,600 students from 42 states and territories and 45 countries.[4] 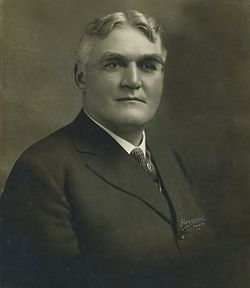 The Huntingdon Normal School was established by a young Huntingdon physician, Dr. Andrew B. Brumbaugh, and his two cousins, Henry and John Brumbaugh. Henry provided a second-story room over his local print shop for classes, while John lodged and fed the college's first teacher, Jacob M. Zuck. Andrew was to "provide students and furniture".[5][6] Juniata's first classes were held on April 17, 1876 with Zuck teaching Rebecca Cornelius, Maggie D. Miller, and Gaius M. Brumbaugh, the only son of Andrew Brumbaugh.

In 1877 the school changed its name to "Brethren Normal School." At this time Zuck also discussed adding a "Scientific Course" and issuing "Certificates of Graduation". In 1879, classes moved into Founder's Hall, the school's first permanent building on the present-day campus then only known as "The Building". On May 11 of same year, Jacob Zuck died from pneumonia when he insisted on sleeping in the then unfinished Founders Hall without a heater. James Quinter was than chosen to lead the school as the school's first president.[6]

The college was renamed "Juniata College" in 1894 for the nearby Juniata River, one of the principal tributaries of the Susquehanna River, due to a ruling at the Brethren Church's Annual Meeting against using the term "Brethren" in naming a school. The name Juniata College was made the schools legal name in 1896.[6]

In 1895, Dr. Martin Grove Brumbaugh, an 1881 graduate from Huntingdon Normal, took over the active presidency of Juniata until 1910. During and after his tenure, Brumbaugh remained intimately connected to the college and reacquired the college's presidency in 1924, after having served as governor of Pennsylvania from 1915 to 1919 and as commissioner of education to Puerto Rico in 1900.[7]

M. G. Brumbaugh died unexpectedly in 1930 while on vacation in Pinehurst, North Carolina and was succeeded in his presidency by a former pupil at Juniata, Dr. Charles Calvert Ellis.

Past Juniata presidents include:[8] 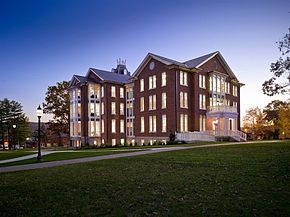 The main campus area is 110 acres (0.45 km2), and the college manages a 315-acre (1.27 km2) Baker-Henry Nature Preserve. Two new buildings since 2000 include the von Liebig Center for Science and the Suzanne von Liebig Theatre. Founders Hall, the first building on campus, has also been renovated recently. Construction was finished in the summer of 2009 and uses underground geothermal energy to heat and cool the building. This building is recognized as a LEED Gold building. 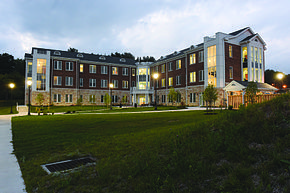 The newest building project on campus is Nathan Hall, a dormitory named in honor of longtime Juniata employee, Hilda Nathan. Hilda worked in the treasurer’s office from 1946 to 1976. The new residence hall, which opened to students for the Fall 2014 semester, offers significant improvements in the areas of accessibility, community and sustainability. Nathan Hall has an elevator and is designed for accessibility throughout the building. The space also is designed to foster community with features such as informal gathering spaces and lounges within the building and outside. The dorm also was constructed using "green" technologies such as geothermal heating, energy-efficient lighting, plantings and green spaces. The building also offers a bike shelter to encourage less driving. 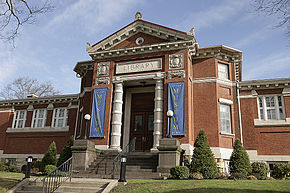 Other off-campus sites include the Baker Peace Chapel (designed by Maya Lin) and the "cliffs," which offer some beautiful scenery of the Juniata River. The college also owns the Raystown Field Station, a 365-acre (1.48 km2) reserve on Raystown Lake, which includes an LEED Gold building and two lodges for semester-long residential programs, often focused on environmental topics.[9]

Carnegie Hall was completed in 1907, paid for in part by a grant from U.S. Steel magnate Andrew Carnegie and served as a library for Juniata until 1963, when the College's current L.A. Beeghly Library was completed. The Museum houses a permanent collection, which includes works from the Hudson River School, American portrait miniatures, as well as Old Master paintings and prints. The Museum hosts regional, national, and international exhibitions.

Juniata College features a "Program of Emphasis" rather than the common Academic major. Within a certain course framework, students choose and create their own Program of Emphasis and graduate with a degree in it. There are designated Programs of Emphasis that follow a set of courses (e.g. Environmental Science, Communication and Anthropology, etc.) or students may create their own with the approval of two faculty advisors.

Juniata is a liberal arts institution. It has strong programs in a variety of areas, from the natural sciences to the arts, social sciences, and humanities. Many students who enter Juniata for the strong science programs, however, find that they enjoy world culture, international programs, peace studies, politics, or a variety of other disciplines. This varied combination allows students to explore different facets of the world.

The strong academic tradition of Juniata College is made apparent in the success of its students. The school touts an impressive graduation rate: 79% of all students entering Juniata graduate; of those, 96% do so within four years. Juniata also has a 95% acceptance rate to all postgraduate programs, including medical, podiatric, dental, occupational therapy, physical therapy, chiropractic, and law schools.

Nearly forty-five percent of Juniata students design their own program of emphasis, and Juniata offers study-abroad opportunities in 22 countries on 6 continents.

Juniata College has also been selected by the 2015 Princeton Review as one of the Best 379 Colleges, and has been mentioned in the following publication: Loren Pope's Colleges That Change Lives; Kaplan, Inc.'s Insider's Guide to the 328 Most Interesting Colleges; Peterson's Competitive Colleges; Miriam Weinstein's Making A Difference College Guide: Outstanding Colleges to Help You Make a Better World; Barron's Best Buys in College Education; Leland Miles' Provoking Thought: What Colleges Should Do for Students; Elle Girl Magazine: Top 50 colleges that Dare to be Different; Rugg's Recommendations on the Colleges; Don Asher's Cool Colleges, and the Fiske Guide to Colleges. 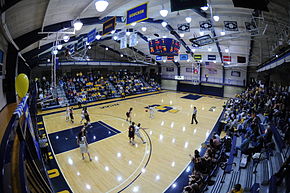 Juniata is a Division III collegiate sports institution. It is well known for its volleyball program (Men's and Women's) and is also a charter member of the Landmark Conference. Juniata athletes compete in the Landmark Conference except for volleyball and football. The Juniata Men's Volleyball Team competes in the Continental Volleyball Conference (formerly it competed in the Eastern Intercollegiate Volleyball Association winning several titles under, both, Division I and Division III sanctioning). The Juniata Eagles Football Squad is a member of the Centennial Conference. Juniata had a school record of five Academic All-Americans in 2004–2005 academic year and 55 All-American honors since 1998.

The Goal Post Trophy goes to the winner of the annual football game with rival Susquehanna University. It is a section of the goal post that was torn down after the 1952 Juniata-Susquehanna game. The visiting Indians (now Eagles) upset the Crusaders in Selinsgrove, and Juniata fans tore down the goal post after the game.[10] At roughly 5 feet tall, it is one of the tallest trophies in college football.[citation needed]

Juniata College has a tradition of campus-wide events dating back to its founding days.[11] 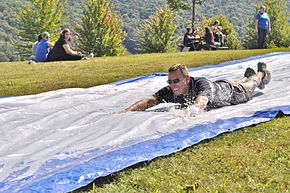 President Troha on a Slip n' Slide during Mountain Day 2014 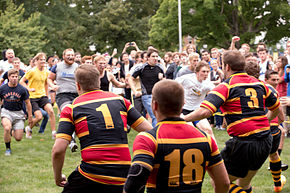 Notable alumni of Juniata include:

Notable faculty of Juniata include: