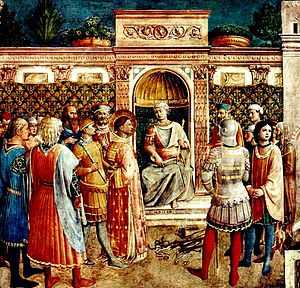 Junius Rusticus presides over the trial of Justin Martyr

Quintus Junius Rusticus (lived c. 100 – c. 170 AD), probably a grandson of Arulenus Rusticus, was one of the teachers of the emperor Marcus Aurelius, and the most distinguished Stoic philosophers of his time. Marcus treated him with utmost respect and honour.

Rusticus held the political positions of Suffect consul in 133 and Consul ordinarius in 162. He served as urban prefect of Rome between 162 and 168. In this role he is notable for presiding over the trial of the Christian theologian Justin Martyr, which ended with Justin's conviction and execution.

The Historia Augusta states that Rusticus was the most important teacher of Marcus Aurelius:

[Marcus] received most instruction from Junius Rusticus, whom he ever revered and whose disciple he became, a man esteemed in both private and public life, and exceedingly well acquainted with the Stoic system, with whom Marcus shared all his counsels both public and private, whom he greeted with a kiss prior to the prefects of the guard, whom he even appointed consul for a second term, and whom after his death he asked the senate to honour with statues.[1]

In his Meditations, Marcus thanks Rusticus for the Stoic training he received from him:

From Rusticus I received the impression that my character required improvement and discipline; and from him I learned not to be led astray to sophistic emulation, nor to writing on speculative matters, nor to delivering little hortatory orations, nor to showing myself off as a man who practices much discipline, or does benevolent acts in order to make a display.[2]

Marcus also explains how it was from Rusticus that he first came to read the works of Epictetus:

and I am indebted to him for being acquainted with the discourses of Epictetus, which he communicated to me out of his own collection.[2]

He was the urban prefect of Rome between 162 and 168, and it was during this time that he conducted the trial of Justin Martyr which led to Justin's execution.[3] Three transcripts of the trial survive, of which the shortest is probably the most accurate.[4]

Justin was denounced to the authorities after disputing with the Cynic philosopher Crescens, according to Tatian and Eusebius.[5][6] Justin was tried together with six companions. The trial record indicates that Rusticus asked him several questions about Christian beliefs and practices, after which he affirmed the law that failure to sacrifice to the Gods in submission to the Imperial decrees was a capital offence. When Justin and his companions refused to do so, Rusticus condemned him and he was beheaded, probably in 165. The martyrdom of Justin preserves the record of the trial.[7]