"Just Say No" was an advertising campaign, part of the U.S. "War on Drugs", prevalent during the 1980s and early 1990s, to discourage children from engaging in illegal recreational drug use by offering various ways of saying no. Eventually, the scope of the campaign expanded to cover violence and premarital sex as well as drug use. The slogan was created and championed by First Lady Nancy Reagan during her husband's presidency.[1]

The campaign emerged from a substance abuse prevention program supported by the National Institutes of Health, pioneered in the 1970s by University of Houston Social Psychology Professor Richard I. Evans. Evans's social inoculation model included teaching student skills to resist peer pressure and other social influences. The campaign involved University projects done by students across the nation. Jordan Zimmerman, a student at USF, won the campaign. Zimmerman is the founder of Zimmerman Advertising, the 15th largest advertising corporation in the United States. The anti-drug movement was among the resistance skills recommended in response to low peer pressure, and Nancy Reagan's larger campaign proved to be a useful dissemination of this social inoculation strategy.[2]

Nancy Reagan first became involved during a campaign trip in 1980 to Daytop Village, New York. She recalls feeling impressed by a need to educate the youth about drugs and drug abuse.[1] Upon her husband's election to the presidency, she returned to Daytop Village and outlined how she wished to help educate the youth.[1] She stated in 1981 that her best role would be to bring awareness about the dangers of drug abuse: "Understanding what drugs can do to your children, understanding peer pressure and understanding why they turn to drugs is... the first step in solving the problem."

Efforts in the United States and abroad

The phrase "Just Say No" first emerged when Nancy Reagan was visiting Longfellow Elementary School in Oakland, California,[3] in 1982 and was asked by a schoolgirl what to do if she was offered drugs. The first lady responded by saying, "Just say no".[4] Just Say No club organizations within schools and school-run anti-drug programs soon became common, in which young people make pacts not to experiment with drugs.[5]

Nancy Reagan was asked about her efforts in the campaign, and said: "If you can save just one child, it's worth it."[6] She traveled throughout the United States and several other nations, totaling over 250,000 miles (400,000 km).[5] Nancy Reagan visited drug rehabilitation centers and abuse prevention programs; with the media attention that the first lady receives, she appeared on television talk shows, recorded public service announcements, and wrote guest articles.[5] By the autumn of 1985, she had appeared on 23 talk shows, cohosted an October 1983 episode of Good Morning America,[7] and starred in a two-hour PBS documentary on drug abuse.[8]

The campaign and the phrase "Just Say No" made their way into popular American culture when TV shows like Diff'rent Strokes and Punky Brewster produced episodes centered on the campaign. In 1983, Nancy Reagan appeared as herself in the television programs Dynasty and Diff'rent Strokes to garner support for the anti-drug campaign.[9] She participated in a 1985 rock music video "Stop the Madness" as well.[10] La Toya Jackson became spokesperson for the campaign in 1987 and recorded a song entitled "Just Say No" with British hit producers Stock/Aitken/Waterman.

In 1985, Nancy Reagan expanded the campaign internationally. She invited the First Ladies of thirty various nations to the White House in Washington, D.C. for a conference entitled the "First Ladies Conference on Drug Abuse".[5] She later became the first First Lady invited to address the United Nations.[5]

She enlisted the help of the Girl Scouts of the United States of America, Kiwanis Club International, and the National Federation of Parents for a Drug-Free Youth to promote the cause;[8] the Kiwanis put up over 2000 billboards with Nancy Reagan's likeness and the slogan.[8] Over 5000 Just Say No clubs were founded in schools and youth organizations in the United States and abroad.[8] Many clubs and organizations remain in operation around the country, where they aim to educate children and teenagers about the effects of drugs.[1]

File:NRJUSTSAYNORALLY.jpg
Nancy Reagan at a "Just Say No" rally at the White House in 1986.

Just Say No crossed over to the United Kingdom in the 1980s, where it was popularized by the BBC's 1986 "Drugwatch" campaign, which revolved around a heroin-addiction storyline in the popular children's TV drama serial Grange Hill. The cast's cover of the original U.S. campaign song, with an added rap, reached the UK top ten.[11] The death of Anna Wood in Sydney, Australia and British teen Leah Betts from Essex in the mid-1990s sparked a media firestorm across both the UK and Australia over the use of illegal drugs. Wood's parents even released her school photograph on a badge with the saying "Just say no to drugs" placed on it to warn society on the dangers of illicit drug use. The photograph was widely circulated in the media. A photo of Betts in a coma in her hospital bed was also circulated in British media. Both teenagers died due to water intoxication as they drank too much water after ingesting ecstasy. 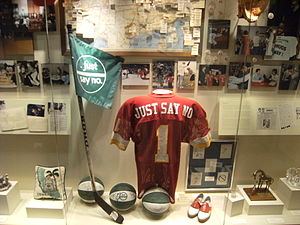 "Just Say No" memorabilia at the Reagan Library

Nancy Reagan's related efforts increased public awareness of drug use, but a direct relationship between reduced drug use and the Just Say No campaign cannot be established, although the use and abuse of illegal recreational drugs significantly declined during the Reagan presidency.[12][13][14] According to research conducted by the Institute for Social Research at the University of Michigan, fewer young people in the 1980s were using illicit drugs.[12] High school seniors using cannabis dropped from 50.1% in 1978 to 36% in 1987,[12] to 12% in 1991[14] and the percentage of students using other drugs decreased similarly.[12] Psychedelic drug use dropped from 11% to 6%, cocaine from 12% to 10%, and heroin from 1% to 0.5%.[12] The campaign did draw some criticism. Nancy Reagan's approach to promoting drug awareness was labeled simplistic by critics who argued that the solution was reduced to a catch phrase.[15]