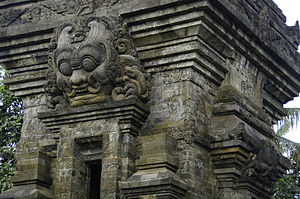 i/ˈ/kaalam or kaala) is a Sanskrit word which means "Time".[1] the Tamil meaning of kaalam or kaala also refers "Time".[2] It is also the name of a deity in which sense it is not always distinguishable from kāla meaning "black". It often used as one of the various names or forms of Yama.

According to Monier-Williams, kāla 2 is from the verbal root kal "to calculate", while the root of kāla 1 is uncertain, though possibly the same.

Kāla as a deity

As applied to gods and goddesses in works such as the Devī Māhātmya and the Skanda Purāṇa, kāla 1 and kāla 2 are not readily distinguishable. Thus Wendy Doniger, translating a conversation between Śiva and Pārvatī from the Skanda Purāṇa, says Mahākāla may mean " 'the Great Death' ... or 'the Great Black One' ".[4] And Swāmī Jagadīśvarānanda, a Hindu translator of the Devī Māhātmya, renders the feminine compound kāla-rātri (where rātri means "night") as "dark night of periodic dissolution".[5]

As Time personified, destroying all things, Kala is a god of death sometimes identified with Yama.

Kāla in other cultures

In Javanese mythology, Batara Kala is the god of destruction. Batara Kala is depicted as giant, born of the sperm of Bathara Guru, the kings of gods.

In Borobudur, the gate to the stairs is adorned with a giant head, making the gate look like the open mouth of the giant. Many other gates in Javanese traditional buildings have this kind of ornament. Perhaps the most detailed Kala Face in Java is on the south side of Candi Kalasan.