From Infogalactic: the planetary knowledge core
Jump to: navigation, search
In this Japanese name, the family name is Aruga. 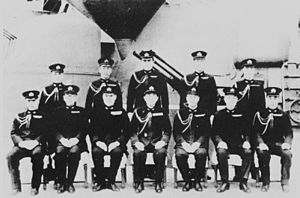 The chief officers of Yamato photographed on April 5, 1945, two days before the Ten-Go sortie; Aruga is in the center of the front row.

Aruga was a native of Nagano prefecture, and graduated from the 45th class of the Imperial Japanese Navy Academy in 1917, ranked 58th of 89 cadets. He served his midshipman duty on the cruiser Iwate and battleship Hyūga, and completed naval artillery and torpedo warfare coursework from 1918-1919. After he was commissioned as an ensign, he served on a number of destroyers. From November 1922-November 1923, he was assigned to the battleship Nagato. After his promotion to lieutenant in December 1923, he served as chief torpedo officer on the destroyers Akikaze and Kikuzuki, followed by the light cruisers Naka and Kiso.[1]

After his promotion to lieutenant commander in 1929, Aruga received his first command; the destroyer Yugao. This was followed by Fuyo in 1930, Tachikaze, Akikaze in 1932, Matsukaze in 1933 and Inazuma in 1934. After a shore assignment to the Chinkai Guard District from 1935–1937, Aruga returned to sea as the executive officer on the cruiser Sendai. He subsequently commanded a Minesweeper Division and Destroyer Division 11 (DesDiv 11), and was promoted to captain in November 1940.[1]

In March 1943, Aruga was reassigned to command the heavy cruiser Chōkai.[3] Recalled to Japan in June 1944 after he developed malaria, Aruga served as chief instructor at the Torpedo School until November of that year, when he was reassigned to the IJN 2nd Fleet. On 25 November 1944, he was given command of the battleship Yamato.[4]

In April 1945, under Operation-Ten Gō, Yamato was assigned on a suicide mission against the American forces at the Battle of Okinawa, given only enough fuel for a one-way mission and only a cruiser and eight destroyers as an escort. Yamato was to wreak havoc on the American landing operation, and to beach herself on the Okinawa shore as a coastal fortress.[5] On April 7, 1945, Yamato was sunk by waves of U.S. Navy carrier-based aircraft. Aruga went down with his ship. He was posthumously promoted two steps in rank to vice admiral.[6]

Some sources render his last name as Ariga;[5] the difference is due to an alternate reading of the first kanji character in his family name.