k-means clustering is a method of vector quantization, originally from signal processing, that is popular for cluster analysis in data mining. k-means clustering aims to partition n observations into k clusters in which each observation belongs to the cluster with the nearest mean, serving as a prototype of the cluster. This results in a partitioning of the data space into Voronoi cells.

The problem is computationally difficult (NP-hard); however, there are efficient heuristic algorithms that are commonly employed and converge quickly to a local optimum. These are usually similar to the expectation-maximization algorithm for mixtures of Gaussian distributions via an iterative refinement approach employed by both algorithms. Additionally, they both use cluster centers to model the data; however, k-means clustering tends to find clusters of comparable spatial extent, while the expectation-maximization mechanism allows clusters to have different shapes.

Given a set of observations (x1, x2, …, xn), where each observation is a d-dimensional real vector, k-means clustering aims to partition the n observations into k (≤ n) sets S = {S1, S2, …, Sk} so as to minimize the within-cluster sum of squares (WCSS) (sum of distance functions of each point in the cluster to the K center). In other words, its objective is to find:

where μi is the mean of points in Si.

The term "k-means" was first used by James MacQueen in 1967,[1] though the idea goes back to Hugo Steinhaus in 1957.[2] The standard algorithm was first proposed by Stuart Lloyd in 1957 as a technique for pulse-code modulation, though it wasn't published outside of Bell Labs until 1982.[3] In 1965, E.W.Forgy published essentially the same method, which is why it is sometimes referred to as Lloyd-Forgy.[4] A more efficient version was proposed and published in Fortran by Hartigan and Wong in 1975/1979.[5][6]

The most common algorithm uses an iterative refinement technique. Due to its ubiquity it is often called the k-means algorithm; it is also referred to as Lloyd's algorithm, particularly in the computer science community.

Given an initial set of k means m1(1),…,mk(1) (see below), the algorithm proceeds by alternating between two steps:[7]

Assignment step: Assign each observation to the cluster whose mean yields the least within-cluster sum of squares (WCSS). Since the sum of squares is the squared Euclidean distance, this is intuitively the "nearest" mean.[8] (Mathematically, this means partitioning the observations according to the Voronoi diagram generated by the means).

is assigned to exactly one

, even if it could be assigned to two or more of them.

Update step: Calculate the new means to be the centroids of the observations in the new clusters.

Since the arithmetic mean is a least-squares estimator, this also minimizes the within-cluster sum of squares (WCSS) objective.

The algorithm has converged when the assignments no longer change. Since both steps optimize the WCSS objective, and there only exists a finite number of such partitionings, the algorithm must converge to a (local) optimum. There is no guarantee that the global optimum is found using this algorithm.

The algorithm is often presented as assigning objects to the nearest cluster by distance. The standard algorithm aims at minimizing the WCSS objective, and thus assigns by "least sum of squares", which is exactly equivalent to assigning by the smallest Euclidean distance. Using a different distance function other than (squared) Euclidean distance may stop the algorithm from converging.[citation needed] Various modifications of k-means such as spherical k-means and k-medoids have been proposed to allow using other distance measures.

As it is a heuristic algorithm, there is no guarantee that it will converge to the global optimum, and the result may depend on the initial clusters. As the algorithm is usually very fast, it is common to run it multiple times with different starting conditions. However, in the worst case, k-means can be very slow to converge: in particular it has been shown that there exist certain point sets, even in 2 dimensions, on which k-means takes exponential time, that is 2Ω(n), to converge.[10] These point sets do not seem to arise in practice: this is corroborated by the fact that the smoothed running time of k-means is polynomial.[11]

Regarding computational complexity, finding the optimal solution to the k-means clustering problem for observations in d dimensions is:

Thus, a variety of heuristic algorithms such as Lloyds algorithm given above are generally used.

The running time of Lloyds algorithm is often given as

Following are some recent insights into this algorithm complexity behavior.

Lloyd's algorithm is the standard approach for this problem, However, it spends a lot of processing time computing the distances between each of the k cluster centers and the n data points. Since points usually stay in the same clusters after a few iterations, much of this work is unnecessary, making the naive implementation very inefficient. Some implementations use the triangle inequality in order to create bounds and accelerate Lloyds algorithm.[17][18][19]

A typical example of the k-means convergence to a local minimum. In this example, the result of k-means clustering (the right figure) contradicts the obvious cluster structure of the data set. The small circles are the data points, the four ray stars are the centroids (means). The initial configuration is on the left figure. The algorithm converges after five iterations presented on the figures, from the left to the right. The illustration was prepared with the Mirkes Java applet.[25]

k-means clustering and EM clustering on an artificial dataset ("mouse"). The tendency of k-means to produce equi-sized clusters leads to bad results, while EM benefits from the Gaussian distribution present in the data set

The two key features of k-means which make it efficient are often regarded as its biggest drawbacks:

A key limitation of k-means is its cluster model. The concept is based on spherical clusters that are separable in a way so that the mean value converges towards the cluster center. The clusters are expected to be of similar size, so that the assignment to the nearest cluster center is the correct assignment. When for example applying k-means with a value of

onto the well-known Iris flower data set, the result often fails to separate the three Iris species contained in the data set. With

, the two visible clusters (one containing two species) will be discovered, whereas with

one of the two clusters will be split into two even parts. In fact,

The result of k-means can also be seen as the Voronoi cells of the cluster means. Since data is split halfway between cluster means, this can lead to suboptimal splits as can be seen in the "mouse" example. The Gaussian models used by the Expectation-maximization algorithm (which can be seen as a generalization of k-means) are more flexible here by having both variances and covariances. The EM result is thus able to accommodate clusters of variable size much better than k-means as well as correlated clusters (not in this example).

k-means clustering, in particular when using heuristics such as Lloyd's algorithm, is rather easy to implement and apply even on large data sets. As such, it has been successfully used in various topics, including market segmentation, computer vision, geostatistics,[26] astronomy and agriculture. It often is used as a preprocessing step for other algorithms, for example to find a starting configuration. 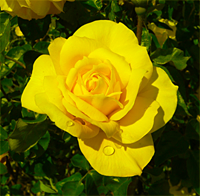 Two-channel (for illustration purposes -- red and green only) color image. 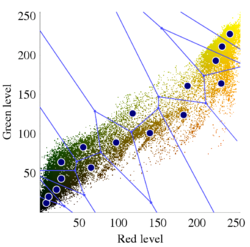 Vector quantization of colors present in the image above into Voronoi cells using k-means.

k-means originates from signal processing, and still finds use in this domain. For example in computer graphics, color quantization is the task of reducing the color palette of an image to a fixed number of colors k. The k-means algorithm can easily be used for this task and produces competitive results. A use case for this approach is image segmentation. Other uses of vector quantization include non-random sampling, as k-means can easily be used to choose k different but prototypical objects from a large data set for further analysis.

In cluster analysis, the k-means algorithm can be used to partition the input data set into k partitions (clusters).

However, the pure k-means algorithm is not very flexible, and as such is of limited use (except for when vector quantization as above is actually the desired use case!). In particular, the parameter k is known to be hard to choose (as discussed above) when not given by external constraints. Another limitation of the algorithm is that it cannot be used with arbitrary distance functions or on non-numerical data. For these use cases, many other algorithms have been developed since.

k-means clustering has been used as a feature learning (or dictionary learning) step, in either (semi-)supervised learning or unsupervised learning.[27] The basic approach is first to train a k-means clustering representation, using the input training data (which need not be labelled). Then, to project any input datum into the new feature space, we have a choice of "encoding" functions, but we can use for example the thresholded matrix-product of the datum with the centroid locations, the distance from the datum to each centroid, or simply an indicator function for the nearest centroid,[27][28] or some smooth transformation of the distance.[29] Alternatively, by transforming the sample-cluster distance through a Gaussian RBF, one effectively obtains the hidden layer of a radial basis function network.[30]

This use of k-means has been successfully combined with simple, linear classifiers for semi-supervised learning in NLP (specifically for named entity recognition)[31] and in computer vision. On an object recognition task, it was found to exhibit comparable performance with more sophisticated feature learning approaches such as autoencoders and restricted Boltzmann machines.[29] However, it generally requires more data than the sophisticated methods, for equivalent performance, because each data point only contributes to one "feature" rather than multiple.[27]

k-means clustering, and its associated expectation-maximization algorithm, is a special case of a Gaussian mixture model, specifically, the limit of taking all covariances as diagonal, equal, and small. It is often easy to generalize a k-means problem into a Gaussian mixture model.[32] Another generalization of the k-means algorithm is the K-SVD algorithm, which estimates data points as a sparse linear combination of "codebook vectors". K-means corresponds to the special case of using a single codebook vector, with a weight of 1.[33]

It was asserted[35][36] that the relaxed solution of k-means clustering, specified by the cluster indicators, is given by principal component analysis (PCA), and the PCA subspace spanned by the principal directions is identical to the cluster centroid subspace. However, that PCA is a useful relaxation of k-means clustering was not a new result,[37] and it is straightforward to uncover counterexamples to the statement that the cluster centroid subspace is spanned by the principal directions.[38]

It has been shown in [39] that under sparsity assumptions and when input data is pre-processed with the whitening transformation k-means produces the solution to the linear Independent component analysis task. This aids in explaining the successful application of k-means to feature learning.

k-means implicitly assumes that the ordering of the input data set does not matter. The bilateral filter is similar to K-means and mean shift in that it maintains a set of data points that are iteratively replaced by means. However, the bilateral filter restricts the calculation of the (kernel weighted) mean to include only points that are close in the ordering of the input data.[34] This makes it applicable to problems such as image denoising, where the spatial arrangement of pixels in an image is of critical importance.

The set of squared error minimizing cluster functions also includes the k-medoids algorithm, an approach which forces the center point of each cluster to be one of the actual points, i.e., it uses medoids in place of centroids.