k-NN is a type of instance-based learning, or lazy learning, where the function is only approximated locally and all computation is deferred until classification. The k-NN algorithm is among the simplest of all machine learning algorithms.

Both for classification and regression, it can be useful to assign weight to the contributions of the neighbors, so that the nearer neighbors contribute more to the average than the more distant ones. For example, a common weighting scheme consists in giving each neighbor a weight of 1/d, where d is the distance to the neighbor.[2]

The neighbors are taken from a set of objects for which the class (for k-NN classification) or the object property value (for k-NN regression) is known. This can be thought of as the training set for the algorithm, though no explicit training step is required.

A shortcoming of the k-NN algorithm is that it is sensitive to the local structure of the data. The algorithm has nothing to do with and is not to be confused with k-means, another popular machine learning technique. 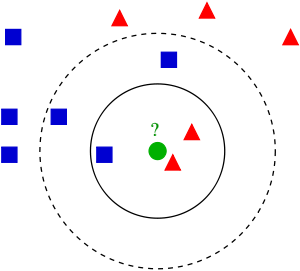 Example of k-NN classification. The test sample (green circle) should be classified either to the first class of blue squares or to the second class of red triangles. If k = 3 (solid line circle) it is assigned to the second class because there are 2 triangles and only 1 square inside the inner circle. If k = 5 (dashed line circle) it is assigned to the first class (3 squares vs. 2 triangles inside the outer circle).

In the classification phase, k is a user-defined constant, and an unlabeled vector (a query or test point) is classified by assigning the label which is most frequent among the k training samples nearest to that query point.

A commonly used distance metric for continuous variables is Euclidean distance. For discrete variables, such as for text classification, another metric can be used, such as the overlap metric (or Hamming distance). In the context of gene expression microarray data, for example, k-NN has also been employed with correlation coefficients such as Pearson and Spearman.[3] Often, the classification accuracy of k-NN can be improved significantly if the distance metric is learned with specialized algorithms such as Large Margin Nearest Neighbor or Neighbourhood components analysis.

A drawback of the basic "majority voting" classification occurs when the class distribution is skewed. That is, examples of a more frequent class tend to dominate the prediction of the new example, because they tend to be common among the k nearest neighbors due to their large number.[4] One way to overcome this problem is to weigh the classification, taking into account the distance from the test point to each of its k nearest neighbors. The class (or value, in regression problems) of each of the k nearest points is multiplied by a weight proportional to the inverse of the distance from that point to the test point. Another way to overcome skew is by abstraction in data representation. For example in a self-organizing map (SOM), each node is a representative (a center) of a cluster of similar points, regardless of their density in the original training data. K-NN can then be applied to the SOM.

The best choice of k depends upon the data; generally, larger values of k reduce the effect of noise on the classification,[5] but make boundaries between classes less distinct. A good k can be selected by various heuristic techniques (see hyperparameter optimization). The special case where the class is predicted to be the class of the closest training sample (i.e. when k = 1) is called the nearest neighbor algorithm.

The accuracy of the k-NN algorithm can be severely degraded by the presence of noisy or irrelevant features, or if the feature scales are not consistent with their importance. Much research effort has been put into selecting or scaling features to improve classification. A particularly popular[citation needed] approach is the use of evolutionary algorithms to optimize feature scaling.[6] Another popular approach is to scale features by the mutual information of the training data with the training classes.[citation needed]

In binary (two class) classification problems, it is helpful to choose k to be an odd number as this avoids tied votes. One popular way of choosing the empirically optimal k in this setting is via bootstrap method.[7]

k-NN is a special case of a variable-bandwidth, kernel density "balloon" estimator with a uniform kernel.[8] [9]

The naive version of the algorithm is easy to implement by computing the distances from the test example to all stored examples, but it is computationally intensive for large training sets. Using an appropriate nearest neighbor search algorithm makes k-NN computationally tractable even for large data sets. Many nearest neighbor search algorithms have been proposed over the years; these generally seek to reduce the number of distance evaluations actually performed.

When the input data to an algorithm is too large to be processed and it is suspected to be notoriously redundant (e.g. the same measurement in both feet and meters) then the input data will be transformed into a reduced representation set of features (also named features vector). Transforming the input data into the set of features is called feature extraction. If the features extracted are carefully chosen it is expected that the features set will extract the relevant information from the input data in order to perform the desired task using this reduced representation instead of the full size input. Feature extraction is performed on raw data prior to applying k-NN algorithm on the transformed data in feature space.

For high-dimensional data (e.g., with number of dimensions more than 10) dimension reduction is usually performed prior to applying the k-NN algorithm in order to avoid the effects of the curse of dimensionality. [12]

The curse of dimensionality in the k-NN context basically means that Euclidean distance is unhelpful in high dimensions because all vectors are almost equidistant to the search query vector (imagine multiple points lying more or less on a circle with the query point at the center; the distance from the query to all data points in the search space is almost the same).

Extension of k-NN (ENN) for classification

Unlike the classic k-NN methods in which only the nearest neighbors of an object are used to estimate its group membership, an extended k-NN method, termed ENN,[17] makes use of a two-way communication for classification: it considers not only who are the nearest neighbors of the test sample, but also who consider the test sample as their nearest neighbors. The idea of ENN method is to assign a group membership to an object by maximizing the intra-class coherence, which is a statistic measuring the coherence among all classes. Empirical studies have shown that ENN can significantly improve the classification accuracy in comparison with the k-NN method.

Data reduction is one of the most important problems for work with huge data sets. Usually, only some of the data points are needed for accurate classification. Those data are called the prototypes and can be found as follows:

A training example surrounded by examples of other classes is called a class outlier. Causes of class outliers include:

Class outliers with k-NN produce noise. They can be detected and separated for future analysis. Given two natural numbers, k>r>0, a training example is called a (k,r)NN class-outlier if its k nearest neighbors include more than r examples of other classes.

Condensed nearest neighbor (CNN, the Hart algorithm) is an algorithm designed to reduce the data set for k-NN classification.[18] It selects the set of prototypes U from the training data, such that 1NN with U can classify the examples almost as accurately as 1NN does with the whole data set.

Calculation of the border ratio.

Use U instead of X for classification. The examples that are not prototypes are called "absorbed" points.

The border ratio is in the interval [0,1] because ||x'-y||never exceeds ||x-y||. This ordering gives preference to the borders of the classes for inclusion in the set of prototypesU. A point of a different label than x is called external to x. The calculation of the border ratio is illustrated by the figure on the right. The data points are labeled by colors: the initial point is x and its label is red. External points are blue and green. The closest to x external point is y. The closest to y red point is x' . The border ratio a(x) = ||x'-y|| / ||x-y||is the attribute of the initial point x.

Below is an illustration of CNN in a series of figures. There are three classes (red, green and blue). Fig. 1: initially there are 60 points in each class. Fig. 2 shows the 1NN classification map: each pixel is classified by 1NN using all the data. Fig. 3 shows the 5NN classification map. White areas correspond to the unclassified regions, where 5NN voting is tied (for example, if there are two green, two red and one blue points among 5 nearest neighbors). Fig. 4 shows the reduced data set. The crosses are the class-outliers selected by the (3,2)NN rule (all the three nearest neighbors of these instances belong to other classes); the squares are the prototypes, and the empty circles are the absorbed points. The left bottom corner shows the numbers of the class-outliers, prototypes and absorbed points for all three classes. The number of prototypes varies from 15% to 20% for different classes in this example. Fig. 5 shows that the 1NN classification map with the prototypes is very similar to that with the initial data set. The figures were produced using the Mirkes applet.[19]

In k-NN regression, the k-NN algorithm is used for estimating continuous variables. One such algorithm uses a weighted average of the k nearest neighbors, weighted by the inverse of their distance. This algorithm works as follows:

A confusion matrix or "matching matrix" is often used as a tool to validate the accuracy of k-NN classification. More robust statistical methods such as likelihood-ratio test can also be applied.