listen), Tamaziɣt Taqbaylit, or Tazwawt) is a Berber language spoken by the Kabyle people in the north and northeast of Algeria. It is spoken primarily in Kabylie, east of Algiers, and in the capital Algiers, but also by various groups near Blida, such as the Beni Salah and Beni Bou Yaqob(extinct?). Estimates about the number of speakers range from 5 million to about 7 million speakers (INALCO) worldwide, the majority in Algeria.

Kabyle is a Northern Berber language part of the Afroasiatic family.

Kabyle Berber is native to Kabylie, it is present in seven Algerian districts.

Approximately one-third of Algerians are Berber-speakers, clustered mostly near Algiers, in Kabylian and Shawi, but with some communities in the west, east and south of the country.[3] Kabyles are the largest Berber group in Algeria, but may not constitute a majority.[3]

The populations of Béjaïa (Bgayet), Bouira (Tubirett) and Tizi Ouzou (Tizi Wezzu) provinces are in majority Kabyle-speaking. Kabyle is mainly spoken in the provinces of Boumerdes, and as well as in Bordj Bou Arreridj, Sétif, Jijel, and in Algiers where it coexists with Algerian Arabic.

Kabyle Berber is also spoken as a native language among the Algerian Kabyle-descended diaspora in European and North American cities (mainly France). It is estimated that half of Kabyles live outside the Kabylian region.

The Berber (Amazigh) language faces an unfavourable environment, despite a public radio (Channel II, which dates back to the Algerian revolution), as well as a public TV channel (Channel IV or Tamazight TV). Since private ownership of TV channels is illegal in Algeria, Kabyles have launched a private Kabyle speaking TV channel, called Berbère Television, that broadcasts from Montreuil, Seine-Saint-Denis in France (93).

In 1994, Kabyle pupils and students boycotted Algerian schools for a year, demanding the officialization of Berber, leading to the symbolic creation of the "Haut Commissariat à l'Amazighité" (HCA) in 1995. Berber was subsequently taught as a non-compulsory language in Berber speaking areas. The course being optional, few people attend.

President Bouteflika has frequently stated that "Amazigh (the Berber language) will never be an official language, and if it has to be a national language, it must be submitted to a referendum".[4] In 2005, President Bouteflika, stated that "there is no country in the world with two official languages" and "this will never be the case of Algeria".[5] Nevertheless, after four decades of pacific struggle, riots, strikes, and social mobilization, including the Berber spring (1980, riots and strikes in the Kabylie region of Tizi Ouzou, Bouira and Bejaïa, as well as Algiers) and the Black Spring in 2001, President Bouteflika and his government stepped back and submitted to the Kabylie pressure and ended recognizing the Amazigh (the Berber) as a "national language" without a referendum. 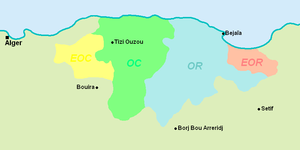 From west to east, some linguists distinguish four zones characterized by three distinct—but mutually intelligible—pronunciations in the following regions:

At the west of Tizi Ghenif, Kabylie of the Djurdjura, Soummam valley and the zone starting from Bejaïa to the east.

The phonemes below reflect the pronunciation of Kabyle.

⟨e⟩ is used to write the epenthetic schwa vowel [ə] which occurs frequently in Kabyle. Historically it is thought to be the result of a pan-Berber reduction or merger of three other vowels.

Kabyle is mostly composed of fricatives, phonemes which are originally stops in other Berber languages, but in writing there is no difference between fricatives and stops. Below is a list of fricatives vs. stops and when they are pronounced (note that gemination turns fricatives into stops). 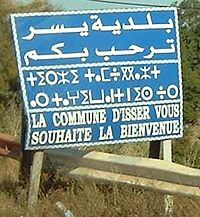 A trilingual sign in Algeria, written in Arabic, Kabyle (using Tifinagh), and French.

The most ancient Berber writings were written in the Libyco-Berber script (Tifinagh). Such writings have been found in Kabylie (also known as Kabylia) and continue to be discovered by archeologists. In fact, Tifinagh alphabet disappeared in the 7th century, when Latin became the official and administrative language in North Africa (as in rest of ex-Roman empire).

The first French–Kabyle dictionary was compiled by a French ethnologist in the 18th century. It was written in the Latin script with an orthography based on that of French.

However, the Kabyle language really became a written language again in the beginning of the 19th century. Under French influence, Kabyle intellectuals began to use the Latin script. "Tamacahutt n wuccen" by Brahim Zellal was one of the first Kabyle books written using this alphabet.

After the independence of Algeria, some Kabyle activists tried to revive the Libyco-Berber script, which is still in use by the Tuareg. Attempts were made to modernize the writing system by modifying the shape of the letters and by adding vowels, but its use remains limited to logos. Kabyle literature continued to be written in the Latin script. This new version of Tifinagh has been called Neo-Tifinagh and has been adopted as the official script of Berber languages in Morocco.

Mouloud Mammeri codified a new orthography for the writing of the Kabyle language which avoided the use of the archaic French orthography. His script has been adopted by all Berber linguists, the INALCO and the Algerian HCA. It uses diacritics and two letters from the extended Latin alphabet: Čč Ḍḍ Ɛɛ Ǧǧ Ɣɣ Ḥḥ Ṣṣ Ṭṭ Ẓẓ.

Plurals generally are formed by replacing initial a- with i-, and either suffixing -en ("regular/external" plurals), changing vowels within the word ("broken/internal" plurals), or both. Examples:

As in all Berber languages, Kabyle has two types of states or cases of the noun: free state and construct state (or 'annexed state'). The free state is morphologically unmarked. The construct state is derived either by changing initial /a-/ to /u-/, loss of initial vowel in some feminine nouns, addition of a semi-vowel word-initially, or in some cases no change occurs at all:

As in Central Morocco Tamazight, construct state is used for subjects placed after their verbs, after prepositions, in noun complement constructions, and after certain numerals. Kabyle also places nouns in construct state when they head a noun phrase containing a co-referential bound pronoun earlier in the utterance[8]

After a preposition (with the exception of "ar" and "s"), all nouns take their annexed state:

Verbs are conjugated for three tenses : the Preterite (past), intensive Aorist (present perfect, present continuous, past continuous) and the future (Ad+Aorist). Unlike other Berber languages, the aorist alone is rarely used in Kabyle (In the other languages it is used to express the present).

Verbs are conjugated for person by adding affixes. These suffixes are static and identical for all tenses (only the theme changes). The epenthetic vowel e may be inserted between the affix and the verb. Verbs are always marked for subject and may also inflect for person of direct and indirect object.

Kabyle is a satellite-framed based language, Kabyle verbs use two particles to show the path of motion:

Kabyle usually expresses negation in two parts, with the particle ur attached to the verb, and one or more negative words that modify the verb or one of its arguments. For example, simple verbal negation is expressed by « ur » before the verb and the particle « ara » after the verb:

Other negative words (acemma...etc.) are used in combination with ur to express more complex types of negation. This system developed via Jespersen's cycle.

Verb derivation is performed by adding affixes. There are three types of derivation forms : Causative, reflexive and Passive.

Interestingly, two prefixes can cancel each other:

Every verb has a corresponding agent noun. In English it could be translated into verb+er. It is obtained by prefixing the verb with « am- » or with « an- » if the first letter is b / f / m / w (there are exceptions however).

Verbal nouns are derived differently from different classes of verbal stems (including 'quality verbs'). Often a- or t(u)- is prefixed:

Pronouns may either occur as standalone words or bound to nouns or verbs.

Possessive pronouns are bound to the modified noun.

There are three demonstratives, near-deictic ('this, these'), far-deictic ('that, those') and absence. They may either be suffixed to nouns, or appear in isolation. Examples: « Axxam-a / Axxam-agi» – "This house.", (House-this), «Wagi yelha» – "This is nice." (This is-nice).

Prepositions precede their objects: « i medden » "to the people", « sy taddart » "from the village". All words preceded by a preposition (except « s » and « ar », "towards", "until" ) take the annexed state.

Some prepositions have two forms : one is used with pronominal suffixes and the other form is used in all other contexts, e.g. ger 'between' → gar.

Some prepositions have a corresponding relative pronoun (or interrogative), for example:

The predicative particle 'd' is an indispensable tool in speaking Kabyle (or any other Amazigh language). "d" is equivalent to both "it is + adjective" and "to be + adjective", but cannot be replaced by the verb "ili" (to be). It is always followed by a noun in free state.

Kabyle has absorbed quite some Arabic and Latin vocabulary. According to Salem Chaker, about a third of Kabyle vocabulary is of foreign origin; the amount of French loanwords has not been studied yet. These loanwords are sometimes Berberized and sometimes kept in their original form. The Berberized words follow the regular grammar of Kabyle (free and annexed state).

Many loanwords from Arabic have often a different meaning in Kabyle:

All verbs of Arabic origin follow a Berber conjugation and verbal derivation:

fhem "to understand" > ssefhem "to explain".

Only the first two numbers are Berber; for higher numbers, Arabic is used. They are yiwen (f. yiwet) "one", sin (f. snat) "two". The noun being counted follows it in the genitive: sin n yirgazen "two men".