From Infogalactic: the planetary knowledge core
Jump to: navigation, search
In this Japanese name, the family name is Higashiyama. 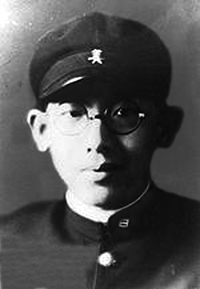 Kaii Higashiyama in his early years

He was born in Yokohama, to parents Kosuke and Higashiyama Kaii. He was given the first name Shinkichi, but later changed this to Kaii. From 3 to 18 years old he lived in Kobe.

In 1926 he graduated from Hyogo Prefectural High School and entered the Nihonga department of Tokyo School of Fine Arts (currently Tokyo National University of Fine Arts and Music), and graduated with commendation in 1931. In 1940 he married Sumi Kawasaki.

In July 1945, he was drafted into the army and received anti-tank training and was demobilized later that year. He spent a lot of time travelling, mostly in Japan and China, but also made several trips to Europe. In 1933, he studied German at the Berlin University and in 1962 he travelled around the Nordic countries.[citation needed]

In 1947, he received the special prize at Nitten, the largest competition art exhibition in Japan. This led him to pursue seeking his own style, later found as a landscape is his major motif. In 1950, he exhibited a painting "the road," in which his simplicity was well recognized. He traveled Scandinavian countries, Germany, Austria, and China, and drew many works themed the sceneries of these countries.

In 1985, January 12, Higashiyama together with Andy Warhol and Joseph Beuys participated in the "Global-Art-Fusion" project. This was a Fax art project, initiated by the conceptual artist Ueli Fuchser, in which a fax was sent with drawings of all three artist within 32 minutes around the world - from Düsseldorf (Germany) via New York (USA) to Tokyo (Japan), received at Vienna's Palais-Liechtenstein Museum of Modern Art. It was meant as a statement for peace during the Cold War in the 1980s in the 1980s.[1]

In 1953, he was selected to paint 27 fusama-e murals for a Japanese house, called Shofuso Japanese House and Gardens, which was being constructed in Nagoya in 1953 for an exhibition at the Museum of Modern Art in New York. Higashiyama, who had been a classmate of architect Junzo Yoshimura, was chosen above a number of other well-known Japanese painters such as Maeda Seison and Yokoyama Taikan, to paint mountain scenes with black ink on the fusuma and the tokonoma alcove. The Shofuso was moved to Philadelphia in 1958 where the murals were on view until they were destroyed by vandals in 1974.

In 1960, he painted a large mural entitled ”Sun, Moon, and The Four Seasons”, at the Tōgū Palace of the Crown Prince. A second imperial commission followed, resulting in the 1968 mural, “Tide at Daybreak” (Asaake no Ushio), which is part of the Nami-no-ma hall of Tokyo Imperial Palace.[2] This large painting is apparently modeled on the rocks of the Oumi Island in Yamaguchi prefecture. The dimensions of the painting are approximately 3.8 meters in height, and about 14.3 meters horizontally, and is located in the

He also painted several murals of Japanese and Chinese landscapes, for the Tōshōdai-ji temple, completed in 1975 and 1980.