From Infogalactic: the planetary knowledge core
Jump to: navigation, search
This article is about the city. For the surrounding district, see Kaiserslautern (district).

listen)) is a city in southwest Germany, located in the Bundesland (State) of Rhineland-Palatinate (Rheinland-Pfalz) at the edge of the Palatinate Forest (Pfälzerwald). The historic centre dates to the 9th century. It is 459 kilometres (285 miles) from Paris, 117 km (73 miles) from Frankfurt am Main, and 159 km (99 miles) from Luxembourg.

Kaiserslautern is home to 98,166 people (June 2014). Additionally, approximately 45,000 NATO military personnel inhabit the city and its surrounding district (Landkreis Kaiserslautern), and contribute approximately US$1 billion annually to the local economy.[2]

Prehistoric settlement in the area of what is now Kaiserslautern has been traced to at least 800 BC. Some 2,500-year-old Celtic tombs were uncovered at Miesau, a town about 29 kilometres (18 miles) west of Kaiserslautern. The recovered relics are now in the Museum for Palatinate History at Speyer.

Kaiserslautern received its name from the favorite hunting retreat of Holy Roman Emperor Frederick Barbarossa who ruled the Holy Roman Empire from 1155 until 1190. The small river Lauter made the old section of Kaiserslautern an island in medieval times. Ruins of Frederick's original castle, built 1152–1160, can still be seen in front of the Rathaus (city hall). A second castle, Nanstein Castle, was built at Landstuhl to guard the western approach to the city. Barbarossa's influence on Kaiserslautern remains today, both in its nickname as a "Barbarossa city" and the open-mouthed pike on the city's coat of arms, reportedly his favorite dish.[citation needed]

The Stiftkirche, Kaiserslautern's oldest church, was constructed in 1250–1350. As the population of Kaiserslautern grew, King Rudolf von Habsburg chartered the town in 1276. St. Martin's Kirche (church) was built from 1300–1350 for an order of monks. Today a section of the original city wall still stands in the courtyard of the church.

In 1375, the city of Kaiserslautern was pledged to Electoral Palatinate and therefore became subsequently part of the Wittelsbach inheritance.

In 1519, Franz von Sickingen became the owner of Nanstein Castle. He became a Protestant, and in 1522 Nanstein was a stronghold for local nobles favouring the Reformation. Sickingen and the local nobles began their battle against the Archbishop of Trier; but the attack was unsuccessful, and they retreated to Nanstein. Nanstein was then besieged by cannon-armed German Catholic princes. Sickingen died after the castle surrendered, and the Protestant nobility of the Electoral Palatinate were subdued by the Catholic princes.

Count of the Electoral Palatinate Johann Casimir, came to Kaiserslautern during the Thirty Years' War (1618–1648). Spanish occupation in 1621–1632 ended when Protestant Swedish armies liberated the area. In 1635, however, Croatian troops of the Austrian emperor's army entered Kaiserslautern and killed 3,000 of the 3,200 residents in three days' plundering.[citation needed] Landstuhl was saved from a similar fate by surrendering without a fight. It took Kaiserslautern about 160 years to repopulate itself.

Conflict did not end with the Peace of Westphalia in 1648. The Elector of the Pfalz had difficulty with many of his subjects and ordered all castles, including Nanstein, destroyed. The French repeatedly invaded and occupied the area, residing in Kaiserslautern in 1686–1697. Nevertheless, after the treaty of Utrecht it was restored to be part of the Palatinate. During the unquiet episodes in the 18th century, the Palatinate was the scene of fighting between French and German troops of different states. In 1713, the French destroyed Barbarossa's castle and the city's wall towers. From 1793 until Napoleon's defeat at Waterloo in 1815, the area was under French administration.

As French power declined after 1815, Kaiserslautern and the Palatinate became a Bavarian province and remained so until 1918. After World War I, French troops again occupied the Palatinate for several years.

In World War II, Allied bombing destroyed more than 60% of Kaiserslautern. The railway and several main roads were primary targets, with the heaviest attacks occurring on 7 January, 11 August, and 28 September 1944. On 20 March 1945, as the last of the 1st Army crossed the Rhine at Remagen, the U.S. 80th Division, 319th Infantry, part of the 3rd US Army, seized Kaiserslautern without resistance. Little reconstruction took place until the currency reform of 1948. The pace of the economy remained slow until 1952, when construction for newly established garrisons of American troops brought economic growth to the area.

Unexploded ordnance from WWII continues to be discovered in and around Kaiserslautern. In May 2012 an unexploded 250-pound Allied bomb was found, buried deeply and reportedly covered by water pipe, during a construction project in the downtown area of the city. On 5 September 2013, another WWII bomb was found during construction near the train station in Enkenbach-Alsenborn.

Kiaserslautern has a moderate climate with adequate rainfall year round. It is classified as a "Cfb" (Marine West Coast Climate/Oceanic climate) by the Köppen Climate Classification system.[3]

Today, Kaiserslautern is a modern centre of information and communications technology and home to a well-known university, a technical college and many international research institutes located throughout the city.

The Palatine Gallery dates from 1874 featuring exhibits of painting and sculpture from the 19th century to the present day. 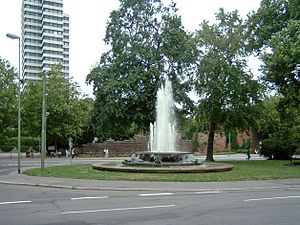 Fackelbrunnen and Town Hall in background 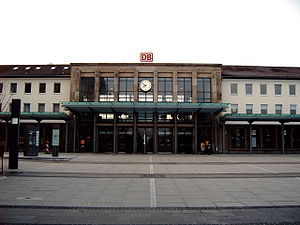 Town Hall Kaiserslautern is one of the tallest buildings and is located in the city centre. The bar and coffee shop on the top floor provides a panoramic view of the city and surrounding countryside.

The tallest building in the centre of Kaiserslautern is St. Mary's, a Roman Catholic church, whilst the highest structure in all Kaiserslautern is the television tower in the suburb of Dansenberg, southwest of the city centre.

Kaiserslautern's large botanical gardens feature a Japanese-style garden. Another unusual feature is the Waschmühle (also known as "Wesch"), an enormous 160-metre public swimming pool that is the largest in Europe. There are several pedestrian only shopping zones with numerous and varied restaurants and bars located in the city centre surrounding the old city (Altstadt). In the Altstadt you will find the "Kaiserbrunnen", a large ornamental fountain with symbols of the city's history such as a sewing machine, as produced by the Pfaff company in the city, a football representing the city's football club and various animals that children can climb. 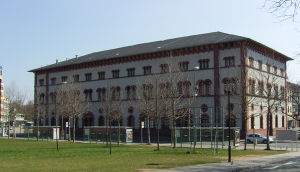 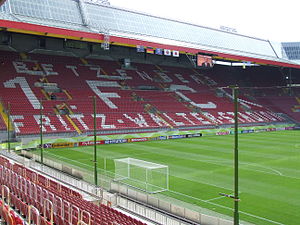 Local theatre Pfalztheater employs more than 300 people and features plays, operas, ballets, concerts, and musicals. The first German performance of West Side Story took place there. As the arts in Germany are significantly subsidized by the government, its ticket prices are reasonably low. Pfalztheater Kaiserslautern hosts the Else-Lasker-Schüler-Preis awards for German literature. 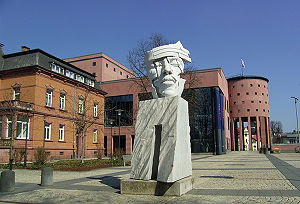 The Kammgarn The Kammgarn is classified as a historical site. It served as a spinning factory before being transformed into the cultural heart of Kaiserslautern. This renovation has preserved its historical character while incorporating the latest sound and lighting technologies. The Kammgarn stands among the top venues in Germany and serves as a first-call club for rising groups and performers as well as established jazz, rock, blues and pop artists in Europe. Performances have included international stars B.B. King, Manfred Mann's Earth Band, Pat Metheny, Uriah Heep and Jan Garbarek.

Gartenschau (Garden exhibition) Better known as the 'Dino Park' because of its lifesize dinosaur models, the Gartenschau is open from April through October and is popular with families. Having begun as a series of botanical displays and enjoying success at the first State Garden Exhibition of Rhineland-Palatinate in Kaiserslautern in 2000, this 54-acre (220,000 m2) park has been transformed into one of the most multi-dimensional cultural centres in Germany.

Fritz Walter Stadium The newly renovated Fritz Walter Stadion accommodates 48,500 football fans. In June 2006, Kaiserslautern was one of 12 German cities to host the 2006 FIFA World Cup. During the five matches played, the first goal ever from an Australian team in a Football World Cup match was scored (by Tim Cahill). 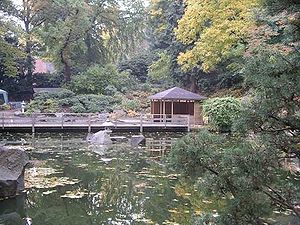 The Japanese Garden in the botanic gardens.

Kaiserslautern is located in one of the largest contiguous forested areas in Central Europe, the Palatinate Forest, which offers numerous hiking trails and lakes to visitors.

Other places of interest in Kaiserslautern are:

The University of Kaiserslautern was founded on 13 July 1970. Earlier, it was part of the twin University of Trier/Kaiserslautern. It started with the departments of Mathematics, Physics and Technology. Later many more faculties were added.

The largest church is St. Mary's (Marienkirche) - a Roman Catholic church. There is also the historic Protestant Church of the Apostle (Apostelkirche). Right at the heart of the city is the very large and old Stiftskirche (also Protestant). All three have very large pipe organs and occ concerts.

The oldest house in town is the Spinnraedel, a guesthouse, only a few steps from the Stiftskirche in the centre of town.

The city has two mosques. The first was built by the Turkish community living in the city. It is located on Richard-Wagner-Str. Another one built more recently, the Islamic Centre (which is an Arabic organization), is located at Bleich str 38.

The city was once the site of the magnificent Moorish Revival Kaiserslautern synagogue. Built in 1886, the synagogue's great dome could be seen from across the city. It was destroyed on 31 August 1938, a few months before Kristallnacht.[6]

Kaiserslautern has a broad-based commercial economy. Among the big companies located in the city are: 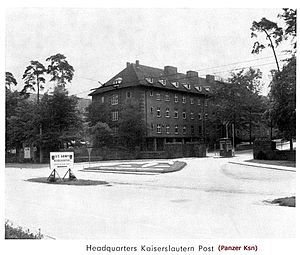 1950 photograph of barracks in Kaiserslautern

Between 1950 and 1955, Kaiserslautern developed into the largest US military community outside of the United States. For this reason Kaiserslautern is also referred to as "K-town"; a term coined by the early American military population who had difficulty pronouncing the name. The Kaiserslautern Military Community (KMC) is a combined community consisting of Army and Air Force components. The KMC consists of Army facilities at Kleber, Panzer, and Dänner-Kaserne, Landstuhl, Miesau, Einsiedlerhof, Pirmasens, Sembach, Rhine Ordnance Barracks and Pulaski Barracks along with Air Force facilities located at Ramstein Air Base, Vogelweh, and Kapaun Air Station.

Kaiserslautern is twinned with:[7]