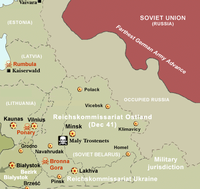 Kaiserwald was a Nazi German concentration camp near the Riga suburb of Mežaparks in Latvia.

Kaiserwald was built in March 1943, during the period that the German army occupied Latvia. The first inmates of the camp were several hundred convicts from Germany.

In early 1944, a number of smaller camps around Riga were brought under the jurisdiction of the Kaiserwald camp.

Following the occupation of Hungary by the Germans, Hungarian Jews were sent to Kaiserwald, as were a number of Jews from Łódź, in Poland. By March 1944, there were 11,878 inmates in the camp and its subsidiaries, 6,182 males and 5,696 females, of whom only 95 were gentiles.

Use of the inmates

Unlike Auschwitz or Treblinka, Kaiserwald was not an extermination camp, and the inmates were put to work by large German companies, notably Allgemeine Elektrizitäts-Gesellschaft, which used a large number of female slaves from Kaiserwald in the production of electrical goods, such as batteries.

On August 6, 1944, as the Red Army advanced westwards and entered Latvia, the Germans began to evacuate the inmates of Kaiserwald to Stutthof, in Poland. Those who were not thought to be able to survive the trip from Latvia to Poland were shot.

All Jews in Kaiserwald who had ever been convicted of any offense, no matter how minor, were executed just prior to the evacuation, as were all Jews under 18 or over 30. By September 1944, all the inmates of Kaiserwald had been moved to Stutthof.

The Red Army took over the camp on October 13, 1944 and later used it as a camp for prisoners of war.