The History of KUMZ starts with Decision of Government of the Soviet Union No. 513-99C dated June 3 of year 1939 regarding building of the Works No. 268 for magnesium alloy products. The construction started in May 1940. During World war II the plant has received casting and rolling production equipment of Stupino metallurgical works evacuated from Moscow region. First aluminium alloy slabs were produced in February 1942.[4]

First forged and extruded products were produced in the autumn of 1943. On the May 5th in 1944 in Pravda newspaper the report about the launch of the plant was published. This date is considered as birthday of the KUMZ. In 1945 new equipment for rolling production was installed. In 1949 KUMZ began the production of aluminium cookware.

In 1950s the plant increased its production capacity and products range. New workshops were built: forging-extrusion (1951), casting (1958), extrusion (1959). In 1958 KUMZ has made first export delivery which included 2952 metric tons of aluminium alloy rolled products. In the same year for the first time magnesium rolled products were produced.[4]

On 8 July 1978 the Supreme Soviet of the Soviet Union awarded to the plant the Order of the Red Banner of Labour for successful development of production and realization of new technologies.[4]

On November 30 of 1992 the plant was reorganized in Joint stock company.

In December 2007 green-field project for heat treatment of plates was launched.[6]

In May 2012 unique vertical 300 MN forging press was launched after modernization.

The raw material for the shop are pure aluminium purchased from smelters, alloying components and aluminium scrap. KUMZ has a number of furnaces: electric, gas, coreless-type induction, electric vacuum holding; and equipment for cutting and scalping. This allows KUMZ to supply its own workshops with high quality wrought aluminium alloy billets, ingots, slabs produced in situ. About 70 aluminium alloys per Russian standards, more than 20 per international standards EN, DIN, ASTM and own Al-Li alloys are mastered.

The plant is one among few world producers of aluminium-lithium alloy sheets and plates.[9]

Beside the flat surface products tread plates and sheets are produced with diamond pattern by means of special rollers. Such product is used for floors of bus, trucks, rail cars, drill towers.

KUMZ Rolling production serves needs of aerospace industry. Specially treated aluminium plates and sheets are used by Boeing and Bombardier[10] companies in their production of airplanes.

The plant has a production line for aluminium roll bond heat exchangers which are used in household refrigerators and flat plate solar thermal collectors.

KUMZ has 39 horizontal hydraulic extrusion presses with power from 500 to 12000 tons. They are situated in four buildings. With help of tools shop KUMZ produces more than 20000 kinds of aluminium profiles, 550 different sizes of bars and rods, 850 kinds of tubes. 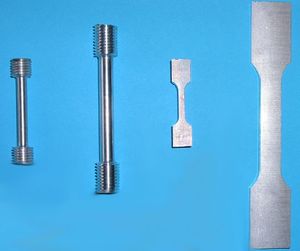 KUMZ has its own laboratory on-site which can perform different testing of aluminium alloy semifinished products in order to evaluate strength, ductility, chemical composition, uniformity of material:

Nowadays main part of products produced by KUMZ is meant for export. Aluminium semi-fabricated products are delivered to 46 countries of the World – in Europe, North and South Americas, Asia, Africa, Oceania.

KUMZ products for export ex Russia are exclusively marketed by:

Big number of large industrial enterprises in Kamensk-Uralsky resulted in lack of personnel and struggle for both workers and qualified engineers from the beginning of the 1950s. Solving the problem of housing was the main argument. Near the KUMZ site a new micro district has grown. It was named after Valery Chkalov. Ordinal habitation building pace in the 1980s was about 11000 m² per year. Company looks after of kindergartens, medical care and leisure of the staff:[4][12]

Every year on the eve of New Year on the square in front of Palace of culture «Metallurgist» KUMZ builds Chkalovsky town of ice and snow. Ice-hills, snow and ice figures of famous fairy tales characters and Ded Moroz with Snegurochka, New Year's trees with colored garlands are opened for all townsmen.

KUMZ as well as any of metallurgical enterprises harms the environment. In 2014 the contribution in atmosphere pollution of the plant was not marked as cosiderable in comparison to other enterprises of the region.[13] KUMZ share in the discharge of sewage into the Iset River was 11.6% (3rd place in the town).