From Infogalactic: the planetary knowledge core
Jump to: navigation, search
This article is about a flexible combat formation. For other uses, see Kampfgruppe (disambiguation). 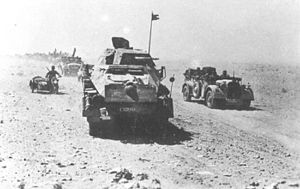 The Panzerjäger-Abteilung 39 (part of "Kampfgruppe Gräf", from the 21. Panzer Division) of the Afrika Korps on the move. The vehicles are a SdKfz 231 8-rad and motorcycle sidecar combination

In military history and military slang, the German term Kampfgruppe (pl. Kampfgruppen; abbrev. KG, or KGr in Luftwaffe usage during World War II) can refer to a combat formation of any kind, but most usually to that employed by the German Wehrmacht and its allies during World War II and, to a lesser extent, in World War I. It also referred to bomber groups in Luftwaffe usage, which themselves consisted of three or four Staffeln (squadrons), and existed within Kampfgeschwader bomber wings of three or four Kampfgruppen per wing.

The Kampfgruppe was an ad hoc combined arms formation, usually employing combination of tanks, infantry, and artillery (including anti-tank) elements, generally organised for a particular task or operation.[1] A Kampfgruppe could range in size from a corps to a company, but the most common was an Abteilung (battalion)-sized formation. Kampfgruppen were generally referred to by either their commanding officer's name or the parent division.[2]

The Stormtroopers (in German Stoßtruppen, shock troops, literally punch/push troops) were specialist military troops which were formed in the last years of World War I as the German army developed new methods of attacking enemy trenches, called "infiltration tactics". Men trained in these methods were known in German as Sturmmann (literally "assault man" but usually translated as Stormtrooper), formed into companies of Sturmtruppen (Storm Troops). Other armies have also used the term "assault troops", "shock troops" or fire teams for specialist soldiers who perform the infiltration tasks of stormtroopers.

With respect to their ad hoc nature and objective-oriented strategy, Finnish ski troops employed during the Soviet-Finnish Winter War of 1939-1940 could, in principle, be considered to be an equivalent to Kampfgruppen. However, given the poor equipment of the Finnish forces, the combined-arms aspect of the Kampfgruppen could not have been applied.[3]

While the original concept of Kampfgruppe is usually reserved to the land warfare, some of the German tacticians and strategist applied it also for naval warfare. The most obvious change was the design (units were usually earmarked for operation in advance instead of being organized ad hoc) and the type of units involved (instead of combined arms, different classes of naval vessels were employed). The examples include German Kampfgruppe 5 employed during Operation Weserübung. This unit consisted of the heavy cruiser Blücher, the heavy cruiser Lützow, the light cruiser Emden, 3 torpedo boats and 8 minesweepers carrying 2,000 troops to Oslo.

During the course of the Second World War Luftwaffe, Kampfgeschwader bomber units consisted of several Kampfgruppen, which in terms of size were situated somewhere between squadrons and groups of Anglo-American air forces.

Currently, the formation closest in use is US Army Task force[4] or the battlegroup formation used by several NATO countries, notably the UK.

Hundreds of Kampfgruppen are documented to have taken part in operations ranging from a few days to over a year during the war. They left a significant impact in the popular culture and the picture of the Second World War. Famous examples include: