Kanaka Dasa (Kannada: ಕನಕದಾಸ) (1509 – 1609)[1] was a poet, philosopher, musician and composer from modern Karnataka. He is known[2] for his Kirtanes and Ugabhoga, compositions in the Kannada language for Carnatic music. Like other Haridasas, he used simple Kannada language and native metrical forms for his compositions. 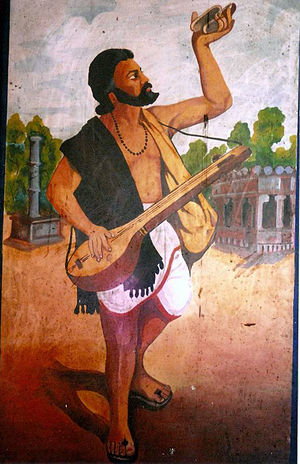 Thimmappa Nayaka was his original name and he belonged to a chieftain family of Kaginele in Haveri district. He was born to the couple Biregowda and Bachchamma at Baada village. Kanaka Nayaka being of the warrior community his defeat in the field of battle, directed him to the path of devotion. He came to be called Kanaka Nayaka as he founded many treasure-trove of gold (kanaka means gold in Kannada) during his childhood and never used for self. Kanaka Dasa was well educated and capable of analyzing the society microscopically. Based on one of his compositions it is interpreted that after he severely got injured in a war and was miraculously saved, he gave up his profession as a warrior and devoted his life to composing music and literature with philosophy explained in common man's language. It appears that he started traveling to places a lot to gain more knowledge. However he maintained a balanced view about all faiths[citation needed]. At a young age he authored poetries Narasimha stotra, Ramadhyana Mantra, and Mohanatarangini. (See Ref 2)

There is a traditional folklore behind this popular quotation. Kanakadasa's Master Vyasatirtha[citation needed] once poses a question to him, that who among the scholars present in the convention could attain salvation(Moksha). Every scholar present was asked the question, Kanakadasa firmly answers in the negative. He answers in the negative even when asked about the chances of his own master attaining salvation. Scholars in the convention get seriously agitated by this episode and they feel that Kanakadasa must be very inconsiderate to deny the salvation to his own master let alone the remaining scholars. But asked about his own chances he says in the affirmative by saying ನಾನು ಹೋದರೆ ಹೋದೇನು adding to the fury of the clueless scholars. His master who could understand the real wisdom behind Kanakadasa`s affirmation, asks him to elaborate his thoughts. Kanakadasa expresses a philosophical idea behind his thought. Kanakadasa had made a Pun giving different literal and philosophical meanings. Though it seemed on the surface that Kanakadasa is claiming that he alone may attain salvation, he had in fact put forth a thoughtful message that no matter what is ones scholarly prowess, one cannot achieve anything until the ego is eliminated.

Kanakadasa has a special association with Udupi as he was the follower of Vyasaraya Swamiji.[citation needed] On the request of Vyasaraya Swamiji of Vyasaraja Math he had come to Udupi.[citation needed] But it was an era when discrimination on the basis of caste was at its peak.[3] The Brahmin priests would not let him enter the temple as he was from a "low" caste though Vyasaraya swamiji asked them to let Kanakadasa into the temple.[4] Kanakadasa was outside the temple meditating on Lord Krishna and singing songs in praise of his Lord, Krishna. He did this for weeks, he is believed to have camped outside the temple for weeks cooking his own food and during this time he was so distraught, he composed poems in praise of Krishna and composed kirthanas (Poems) which are relevant even today about how all humans are equal, every one is born the same way physically, everyone shares the same water, same sun for their life on earth. Every Hindu temple and the deity in the Hindu temple always faces east. But in Udupi, Krishna, the deity faces west. It is believed that something unnatural happened those days, when Kanakadasa was outside the temple for days waiting to see Lord Krishna and waiting to be let into the temple. It is believed that the during those days,kanaka was not allowed to have darshan of krishna with devotion when he sang kirthanas temple wall fell down and the deity of Lord Krishna turned around and there was a crack in the outer walls of the temple through which the ardent devotee of Krishna, Kanakadasa was able to see his Lord. This left the orthodox community flabbergasted as to why something like this happened. Since then the Krishna idol has been facing west even though the main entrance has been facing east and this has remained a mystery every since. Today that window (commonly called as "Kanakana Kindi") stands as a tribute to Kanakadasa. Almost all devotees who visit Udupi Krishna temple try to have a peep at the idol through this small window wishing to relive the ecstasy, Kanaka had the divine ‘darshan’. It is also a memorial to Kanakadasa and a testimony to the eclectic Hindu belief that devotion, poetry and sainthood are above caste and creed and certainty above orthodoxy.[5] It is said that Kanakadasa lived in a hut in this place in front of the “gopura”. Later, a small shrine was built in his memory and it came to be known as “Kanakana Kindi” or “Kanakana Mandira”.

Although many saints such as Purandaradasa and Vijayadasa visited Udupi and were devotees of Lord Krishna, it is Kanakadasa's association to Lord Krishna, which has a deeper meaning.

His writing started showing his innovativeness in using day-to-day activities of common man. For e.g. Ramadhanya Charite is a poetic expression of conflicts between rich and poor classes where he uses Ramadhanya ragi (staple food of poor and high in nutrients) and rice (main food of rich but not as rich in nutrients) to synonymously represent poor and rich. He joined Haridasa movement and became a follower of Vyasaraja who named him as Kanakadasa. His poems and krithi deal with many aspects of life and expose the futility of external rituals. They stress the need for cultivation of moral values in life. His compositions addressed social issues in addition to devotional aspect. Kanaka Daasa was very aggressive and straight forward in criticizing evils of society such as superiority claims using caste system. His poem "Kula Kula Kulavendu hodedhadadiri" asks humans not to segregate themselves from one another, because every human is born the same way, everyone eats the same food and drinks the same water, hence none is superior or inferior to one another.

The deity he worshiped was Adhikeshava of Kaginele, presently in Haveri district of Karnataka. Kaginele, now a village, was a prosperous place and trading center in the Middle Ages. Out of the many of his compositions, about 240 (see Ref 2) are fully accountable today. All his Karnataka Music compositions end with mudra (signature) Kaginele Adhikeshava. In addition to being a poet he worked as a social reformer by down playing dogmatic communities that were suppressing the disadvantaged communities. Kanakadasa made extreme effort in reforming the disadvantaged communities by convincing them to give-up their age old obsolete social practices and adapt to the changing world. He effectively used music to convey his philosophy. He lived at Tirupathi in his last days. He is one of the greatest musician, composer, poet, social reformer, philosopher and saints that India has ever seen.'

His writings were unique in style. In Ramadhanyacharitre, an allegory on the conflict between the socially strong and weak castes and classes, presented as an argument between two foodgrains, rice and ragi, is a most creative literary piece with a powerful social message,In the work, rice represents the socially powerful and ragi (millet) represents the working people. The two grains come before Rama to argue their case and establish their superiority. In the end Rama sends both of them to prison for six months. At the end of the period, rice has turned rotten while the hardy ragi survives, earning Rama's blessings. This shows the intelligence of Kanaka Daasa in trying to reform the society. He was blunt in criticizing those who opposed the good practices. In one his compositions he says,"Eternal hell is for those who criticize noble men, for those who condemn teachings of jagadguru...".

Ramadhanyacharite (story of ragi millet) and an epic

Kanakadasa rationalized bhakti (devotion) by giving worldly similes. His writing has intimate touch that identifies the reader with the poet himself. His two famous compositions in translation are given below. One condemns caste system in a refined poetic way and the other wonders, at the colorful and baffling creation of God Almighty in childlike wonder.

His Nalacharite is based on the famous love-story of Nala and Damayanti, which appears in Mahabarata. Though a great devotee of Lord Krishna, Kanakadasa gives his own interpretation. Nala who is in love with Damayanti, exercises restraint svayamvara (choosing bride/bridegroom) ceremony to win over Damayanti by allowing Indra and other gods a chance to win over her. When he loses everything in a dice-game and gets exiled to the forest, stubbornly followed by Damayanti, he deserts her in sleep, hoping that she may go back to her parents and have a better life. He later drives king Rituparna to the second svayamvara of Damayanti, to see his wife married to a suitable person and be happy! Lord Krishna appears only once casually to rescue the caravan in which the hapless Damayanti was traveling and was attacked by wild elephants.

Nrisimhastava is a work dealing with glory of god Narasimha (half human and half lion).

Kanakadasa's Ramadhanyacharite has quite an unconventional theme. It is about a battle of words between ragi (millet) and rice, each claiming superiority. They go to lord Rama for justice. With the help of the sages, Rama proves the superiority of ragi over rice. Ragi becomes blessed by absorbing the qualities of Raghava, another epithet of Rama. It is interpreted as poverty and humility being upheld by the poet above material wealth. Even today ragi is food of the poor which has high nutrition value compared to rice. Ragi is a good source of nutrition for people with diabetes for its low sugar content and nutrition value.

Mohanatarangini, although a kavya (poem in classical style) written with all conventional eighteen descriptions, deals with eroticism. Pleasure-based eroticism of Shri Krishna with the consorts. The eroticism between Aniruddha and Usha form the main theme.

It excels in depicting contemporary life. The description of Shri Krishna's Dwaravati (Dwaraka) is very similar to that of Vijayanagara, under Krishnadevaraya as noticed by foreign travelers. The market place with colorful stalls with various commodities, well demarcated lanes brimming with craftsmen, clients and merchants, royal garden parties and glory of the palace find their place in Mohanatarangini. It echoes the contemporary Portuguese travelers' accounts. A drinking bout of men and women of working class is very picturesque. The reader feels as if Kanakadasa is providing a commentary of a live event. It is for such unconventional and down-to-earth descriptions as also for social awareness that the great poet-saint has become immortal.

Are you a creator of illusion? or illusion your creation?

Are you a part of the body? Or is the body a part of you?

Does sweetness lie in sugar, or sugar in sweetness? Or do both sweetness and sugar lie in the tongue?

In tribute to the great saint, the Government of Karnataka has declared his birthday as a state holiday. All the government offices, schools and colleges around the state celebrate the birth anniversary of Shri Kanaka Dasa.

Famous singers Like Puttur Narasimha Nayak and Vidyabhushana are popularising the songs of kanakadasa in modern age.

Veteran Kannada film actor Dr. Rajkumar enacted as KankaDasa in the movie Bhakta Kanakadasa and the movie was a superhit.[9]