The Kansas Legislature is the state legislature of the U.S. state of Kansas. It is a bicameral assembly, composed of the lower Kansas House of Representatives, with 125 state representatives, and the upper Kansas Senate, with 40 state senators.

Prior to statehood, separate pro-slavery and anti-slavery territorial legislatures emerged, drafting four separate constitutions, until one was finally ratified and Kansas became a state in 1861. Republicans hold a long-standing supermajority in both houses of the state legislature, despite a short-lived dominance by the Populist Party. The state legislature approved one of the first child labor laws in the nation.

Composed of 165 state lawmakers, the state legislature meets at the Kansas State Capitol in Topeka once a year in regular session. Additional special sessions can be called by the governor of Kansas.

The Kansas Territory was created out of the Kansas-Nebraska Act in 1854.[1] In several of the provisions of the act, the law allowed the settlers of the newly created territory to determine, by vote, whether Kansas, once statehood was achieved, would be entered as either a free or a slave state.[2] The act created a rush of both abolitionist Northern and pro-slavery Southern immigrants to the territory, hoping that strength through numbers would place Kansas in their camp. Animosities between the newly arrived sides quickly turned into open violence and guerrilla warfare, giving name to this period known as Bleeding Kansas.[2]

During Kansas' first elections for a territorial government on March 30, 1855, nearly 5,000 Missouri men led by United States Senator David Rice Atchison and a group of prominent pro-slavery Missourians, crossed the territorial border to overwhelm polling places and elect pro-slavery candidates.[3] The elections resulted in 13 pro-slavery members of the upper house of the territorial legislature and one free-state member, who resigned.[4] The lower house ended up with 25 pro-slavery members and one free-state member.[4] Free-Staters immediately cried foul, naming the new Kansas Territorial Legislature the "Bogus Legislature."[5] Thirty-eight pro-slavery legislators met at the Shawnee Manual Labor School between July 16 and August 30, 1855,[4] and began crafting over a thousand pages of laws aimed at making Kansas a slave state.

Free-Staters convened their own unauthorized shadow legislature and territorial government in Topeka, crafting their own Topeka Constitution in late 1855. While the document was debated and submitted to a vote to the territory, it was never accepted by the federal government as it considered the Free-State body illegitimate and in rebellion.[6] The pro-slavery territorial legislature's response to the Free-Staters and growing violence was the writing of the Lecompton Constitution in 1857. Due to an electoral boycott by abolitionist groups and the questions regarding the validity of the legislature itself, it never officially became law.

While the Lecompton Constitution was debated, new elections for the territorial legislature in 1857 gave the Free-Staters a majority government, caused in part to a boycott by pro-slavery groups. With this new mandate, the legislature convened to write the Leavenworth Constitution, a radically progressive document for the Victorian era in its wording of rights for women and African-Americans. The constitution was adopted in 1858, though it too suffered the same fate as previous documents when the U.S. Congress refused to ratify it.

Following the Leavenworth Constitution's defeat, the territorial legislature again crafted a new document the following year, dubbed the Wyandotte Constitution. A compromise of sorts, it outlawed slavery in the territory, while removing progressive sections on Native Americans, women and blacks. The territorial legislature successfully passed the document, and submitted it to public referendum. It was passed by the Kansas electorate on October 4, 1859.

Following long debates in both the U.S. House of Representatives and the Senate, on January 29, 1861, President James Buchanan authorized Kansas to become the 34th state of United States. It had entered into the Union as a free state. Only six days later, the Confederate States of America formed between seven Southern states that had seceded from the United States in the previous two months.

The first Kansas impeachments occurred in 1862, brought about in part by United States Republican Party infighting in the state.[7]

The election of state officers under the Wyandotte Constitution took place in December 1859, and because of a delay in the Kansas path to statehood, those officers did not assume office until February 1861.[7] The lapse of time created a constitutional question as to the expiration of the two-year terms for which Governor Charles L. Robinson and the chief administrative officers were elected, with Robinson's opponents calling for a November 1861 election.[7] Robinson refused to permit the canvassing of votes for the offices in the 1861 election and his position was upheld by the Kansas Supreme Court.[7]

The state legislature brought impeachment trials against the governor, Kansas Secretary of State J. W. Robinson, and State Auditor George S. Hillyer over what they believed to be the unlawful sale of state bonds.[7] They convicted J. W. Robinson and Hillyer of selling state bonds in a manner in direct violation of the laws of the state, but failed to convict the two officials on conspiracy and other articles of impeachment.[7] Only three state senators voted to impeach the governor, who was less directly involved in the sale of the bonds.[7]

In 1867, a constitutional amendment was sent to voters to allow women to vote, but failed.[8]

State offices began to move from the Old Constitutional Hall to the east wing of the Kansas State Capitol in 1869, which was still undergoing construction.[9] The state legislature first met there in 1870, though the east wing was not completed until 1873.[9] Work would continue on the building until March 24, 1903.[9] 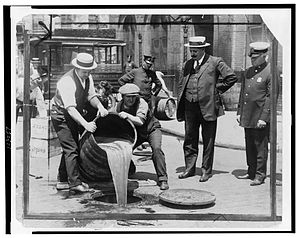 Removal of liquor during prohibition.

On February 19, 1881, Kansas became the first state to amend its constitution to prohibit all alcoholic beverages.[10] This action was spawned by the temperance movement, and was enforced by the ax-totting Carrie A. Nation beginning in 1888.[10] After 1890, prohibition was joined with progressivism to create a reform movement.[10] Kansas did not repeal prohibition until 1948, and even then it continued to prohibit public bars until 1987.[10]

The state legislature was a leader in child labor reform, enacting a law in 1905 to restrict children under 14 from working in factories, meatpacking houses, or mines.[12]

Kansas was a center of the Progressive Movement, with support from the middle classes, editors such as William Allen White of the Emporia Gazette, and the prohibitionists.[13] With the help of progressive state legislators, women gained the right to vote through a constitutional amendment approved by Kansans on November 5, 1912.[8]

Between 1922 and 1927, there were several legal battles Kansas against the Ku Klux Klan, resulting in their expulsion from the state.[14]

The Kansas Legislature adopted the flag of Kansas in 1927.

The Kansas Legislature is composed of 165 part-time legislators, meeting normally once a year. Meetings begin in January and usually will last for a period of 90 days. The Governor of Kansas retains the power to call a special legislative session if needed.

A proposed law is introduced in the state legislature as a bill. There are seven basic steps to the life of a bill: the introduction, standing committee action, a vote by the Committee of the Whole, floor passage, action by the second house, action by the governor and publication of the law.[16]

When a bill is introduced its title is read, it is printed and distributed to members of the house of origin, and it is referred to a standing committee.[16] Standing committee chairs decide whether or not to hear a bill and members of the committee can submit amendments to the bill.[16] After consideration and discussion, the committee votes on whether or not to send a committee report to the Committee of the Whole.[16] While under consideration by the Committee of the Whole, amendments can be submitted by state legislators in the house of origin.[16] The final action in the house of origin is a vote by the full membership.[16]

Bills go through an identical process in the opposite house of the state legislature.[16] After passage by both houses, a bill is submitted to the governor, who either signs it into law or vetos it. If vetoed, the bill only becomes law if both houses of the legislature vote to override the veto with a two-thirds majority of their membership.[16]