From Infogalactic: the planetary knowledge core
Jump to: navigation, search
This article is about a measuring method. For the album by Greydon Square, see The Kardashev Scale (album).

The Kardashev scale is a method of measuring a civilization's level of technological advancement, based on the amount of energy a civilization is able to use for communication.[1] The scale has three designated categories:

The scale is hypothetical, and regards energy consumption on a cosmic scale. It was proposed in 1964 by the Soviet astronomer Nikolai Kardashev. Various extensions of the scale have since been proposed, including a wider range of power levels (types 0, IV and V) and the use of metrics other than pure power.

In 1964, Kardashev defined three levels of civilizations, based on the order of magnitude of power available to them:

Type I
Technological level of a civilization that can harness all the energy that falls on a planet from its parent star (for Earth-Sun system, this value is close to 7x1017 watts), which is quite a bit higher than the amount presently attained on earth, with energy consumption at ≈4×1019 erg/sec (4 × 1012 watts).[1] The astronomer Guillermo A. Lemarchand stated this as a level near contemporary terrestrial civilization with an energy capability equivalent to the solar insolation on Earth, between 1016 and 1017 watts.[3]
Type II
A civilization capable of harnessing the energy radiated by its own star—for example, the stage of successful construction of a Dyson sphere—with energy consumption at ≈4×1033 erg/sec.[1] Lemarchand stated this as a civilization capable of utilizing and channeling the entire radiation output of its star. The energy utilization would then be comparable to the luminosity of our Sun, about 4×1033 erg/sec (4×1026 watts).[3]
Type III
A civilization in possession of energy on the scale of its own galaxy, with energy consumption at ≈4×1044 erg/sec.[1] Lemarchand stated this as a civilization with access to the power comparable to the luminosity of the entire Milky Way galaxy, about 4×1044 erg/sec (4×1037 watts).[3] 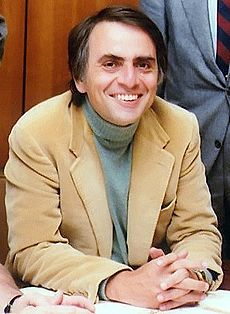 According to the astronomer Carl Sagan, humanity is going through a phase of technical adolescence, "typical of a civilization about to integrate the type I Kardashev scale."
Further information: World energy consumption

Carl Sagan suggested defining intermediate values (not considered in Kardashev's original scale) by interpolating and extrapolating the values given above for types I (1016 W), II (1026 W) and III (1036 W), which would produce the formula

where value K is a civilization's Kardashev rating and P is the power it uses, in watts. Using this extrapolation, a "Type 0" civilization, not defined by Kardashev, would control about 1 MW of power, and humanity's civilization type as of 1973 was about 0.7 (apparently using 10 terawatt (TW) as the value for 1970s humanity).[5]

In 2015, a study of galactic mid-infrared emissions came to the conclusion that "Kardashev Type-III civilizations are either very rare or do not exist in the local Universe".[8]

In 2016, Paul Glister, author of the Centauri Dreams website, described a signal apparently from the star HD 164595 as requiring the power of a Type I or Type II civilization, if produced by extraterrestrial lifeform.[17] METI president Douglas Vakoch said that if the signal came from an extraterrestrial civilization at the distance of HD 164595 that had targeted Earth, it could be from a Type I civilization,[18] while if the signal is omnidirectional it would represent a signal from a Type II civilization.[19] However, in August 2016 it was discovered that the signal's origin was most likely a military satellite orbiting the Earth.[20] 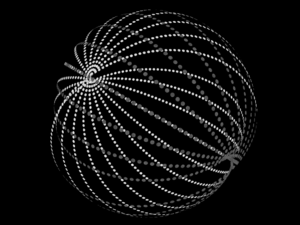 Figure of a Dyson swarm surrounding a star

There are many historical examples of human civilization undergoing large-scale transitions, such as the Industrial Revolution. The transition between Kardashev scale levels could potentially represent similarly dramatic periods of social upheaval, since they entail surpassing the hard limits of the resources available in a civilization's existing territory. A common speculation[30] suggests that the transition from Type 0 to Type I might carry a strong risk of self-destruction since, in some scenarios, there would no longer be room for further expansion on the civilization's home planet, as in a Malthusian catastrophe. Excessive use of energy without adequate disposal of heat, for example, could plausibly make the planet of a civilization approaching Type I unsuitable to the biology of the dominant life-forms and their food sources. If Earth is an example, then sea temperatures in excess of 35 °C (95 °F) would jeopardize marine life and make the cooling of mammals to temperatures suitable for their metabolism difficult if not impossible. Of course, these theoretical speculations may not become problems in reality thanks to evolution or the application of future engineering and technology. Also, by the time a civilization reaches Type I it may have colonized other planets or created O'Neill-type colonies, so that waste heat could be distributed throughout the planetary system.

Extensions to the original scale

Many extensions and modifications to the Kardashev scale have been proposed.

According to this scale, humans, having wide expertise in various branches of Chemistry and Biology have passed the stage of Type III- minus. Type IV-minus (that have had practical and widespread applications) have been seen in areas like nanotechnology, semiconductors, materials science and genetic engineering. While Type V-minus has seen large scale application in the field and subfields of nuclear physics. Type VI-minus has had tentative research in the field of particle physics with particle colliders such as the Large Hadron Collider.

It has been argued that, because we cannot understand advanced civilizations, we cannot predict their behavior. Thus, the Kardashev scale may not be relevant or useful for classifying extraterrestrial civilizations. This central argument is found in the book Evolving the Alien: The Science of Extraterrestrial Life.[35]