Karjalais-suomalainen sosialistinen neuvostotasavalta (help·info); Russian: Каре́ло-Фи́нская Сове́тская Социалисти́ческая Респу́блика, tr. Karelo-Finskaya Sovetskaya Sotsialisticheskaya Respublika) was a republic of the Soviet Union. It existed from 1940 until it was made part of the Russian SFSR in 1956 as the Karelian Autonomous Soviet Socialist Republic (which became the Republic of Karelia, a federal subject of Russia, on November 13, 1991). 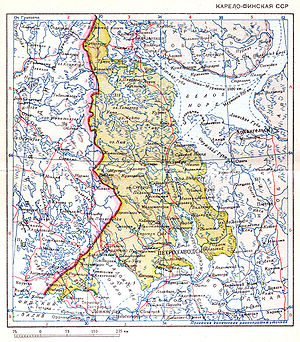 The Karelo-Finnish SSR in 1940, during the Interim Peace.

The Karelo-Finnish Soviet Socialist Republic was set up on March 31, 1940 by merging the KASSR with the Finnish Democratic Republic (created in territory ceded by Finland in the Winter War by the Moscow Peace Treaty, namely the Karelian Isthmus and Ladoga Karelia, including the cities of Viipuri and Sortavala).

The entire Karelian population of the ceded areas, about 422,000 people, was evacuated to Finland, and the territories were settled by people from other parts of the Soviet Union.

Creating a new Republic of the Union for an ethnic group that neither was large in absolute terms, nor constituted anything close to a majority in its territory, nor had been a separate independent nation prior to its incorporation into the USSR, was unprecedented in the history of the USSR. Some later historians explained the elevation of Soviet Karelia from an Autonomous Soviet Socialist Republic (within the RSFSR) to an SSR by political reasons, as a "convenient means for facilitating the possible incorporation of additional Finnish territory" (or, possibly, the whole of Finland) into the USSR.[1][2][3]

In the ensuing Continuation War, Finland re-annexed the territory that it had lost in 1940 and occupied most of the Karelian lands that had been within the USSR prior to 1940, including the capital Petrozavodsk (Petroskoi).[3] In 1944, the Soviet Union recaptured the area. Soviet sovereignty was recognized by Finland in the Moscow Armistice and Paris Peace Treaty. The Finnish Karelians were evacuated to Finland again.

In September 1944, the Karelian Isthmus with Vyborg (Viipuri) was transferred from the Karelo-Finnish SSR to the Leningrad Oblast of the RSFSR, but Ladoga Karelia remained a part of the republic.

On July 16, 1956, the republic was incorporated into the Russian SFSR as the Karelian Autonomous Soviet Socialist Republic. This move can perhaps be explained in the context of the general post-war improvement of Finno-Soviet relations,[1] which also included such steps as the Soviets' return of the Porkkala Naval Base leased territory to full Finnish sovereignty (January 1956), and leasing Maly Vysotsky Island and the Soviet section of the Saimaa Canal (conquered by the USSR in 1940 and 1944) back to Finland (1963).

The abolition of the Karelian SSR in 1956 was the only case in the history of the USSR (1922–1991) of merging a member republic of the USSR into another republic.

In the waning days of the USSR, the Karelian ASSR became the Republic of Karelia, a subdivision of the Russian Federation, on November 13, 1991.

The chairman of the Karelo-Finnish Supreme Soviet (1940–1956) was Finnish communist Otto Ville Kuusinen. In the republic there was also a separate Karelo-Finnish Communist Party led in the 1940s by G.N. Kupriyanov.

Yuri Andropov served for some years as the first secretary of the republic's Komsomol branch, the Leninist Communist Youth League of the Karelo-Finnish Soviet Socialist Republic.

Chairmen of the Supreme Soviet[4]

Chairmen of the Presidium of the Supreme Soviet 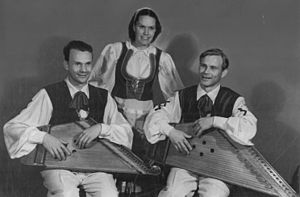 Kantele players from the KFSSR at the Second World Festival of Youth and Students, 1949.