Karl Jäger (help·info) (20 September 1888 – 22 June 1959) was a Swiss-born SS-Standartenführer (Colonel) and Einsatzkommando leader who perpetrated acts of genocide during the Holocaust.[1]

Jäger was born in Schaffhausen, Switzerland. In World War I he received the Iron Cross (1st Class) and other awards. After World War I, Jäger, an orchestrion maker by profession, obtained a managerial position with the Weber orchestrion factory in Waldkirch. He joined the Nazi Party in 1923 (serial no. 359269) and founded the local party chapter, as a result of which he became known as "Waldkirch's Hitler". The Weber company went bankrupt in 1931,[1] and he was thrown into unemployment for several years, but – according to his own claims – he spurned unemployment support from the government of the Weimar Republic, which he despised. By 1934, he had used up all his savings, and his wife Emma separated from him, though their divorce was not formalized until 1940.[1] He joined the SS as early as 1932 (serial no. 62823), but his rise within the SS under Heinrich Himmler began only in 1935.[1]

He was assigned to Ludwigsburg, then to Ravensburg in 1935, and to Münster in 1938, where he was named head of the local office of the Sicherheitsdienst (SD). During the invasion of the Netherlands on 10 May 1940, Jäger was named commander of Einsatzkommando 3, a unit of Einsatzgruppe A.

Jäger was instrumental in the brutal and systematic destruction of the Jewish community of Lithuania. From July 1941 until September 1943 Jäger served as commander of the SD Einsatzkommando 3a, a sub-unit of Einsatzgruppe A under Franz Walter Stahlecker, in Kaunas. Under Jäger's command, the Einsatzkommando, with the help of Lithuanians, shot Jewish men, women and children indiscriminately. It perpetrated the Ninth Fort massacres of November 1941.[2]

During this time, reports detailing calculated acts of mass murder were routinely submitted to his superiors. Some of these reports survived the war and are collectively referred to as the "Jäger Report". Reassigned back to Germany near the end of 1943, Jäger was appointed commander of the SD in Reichenberg in the Sudetenland. 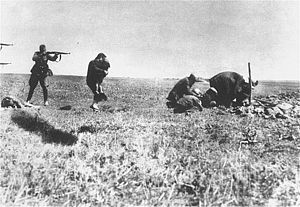 Einsatzgruppen killing people in 1942 in the Ukraine at Ivangorod. Jäger organized thousands of murders like these.

The actions by Einsatzkommando 3, including the Rollkommando Hamann killing squad were tallied by Jäger himself. The report keeps an almost daily running total of the liquidations of 137,346 people. Among all Nazi documents detailing calculated acts of mass murder and other atrocities, the "Jäger Report" is one of the most horrifying. It provides a detailed account of the murderous rampage of this "special squad" in Nazi-occupied Lithuania.

Jäger escaped capture by the Allies when the war ended, assumed a false identity, and was able to assimilate back into society as a farm hand until his report was discovered in March 1959. Arrested and charged with his crimes, Jäger committed suicide by hanging himself in prison in Hohenasperg while he was awaiting trial in June 1959.