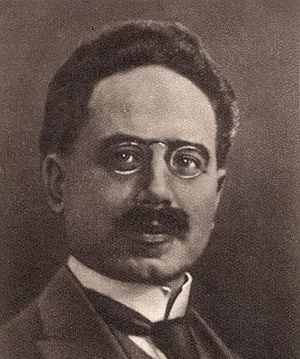 listen (help·info); 13 August 1871 – 15 January 1919) was a German socialist and a co-founder with Rosa Luxemburg of the Spartacist League and the Communist Party of Germany. He is best known for his opposition to World War I in the Reichstag and his role in the Spartacist uprising of 1919. The uprising was crushed by the social democrat government and the Freikorps (paramilitary units formed of World War I veterans). Liebknecht and Luxemburg were killed.

After their deaths, Karl Liebknecht and Rosa Luxemburg became martyrs for Socialists. According to the Federal Office for the Protection of the Constitution, commemoration of Liebknecht and Luxemburg continues to play an important role among the German far left.[1]

Liebknecht was born in Leipzig, Saxony, Germany, the son of Wilhelm Martin Philipp Christian Ludwig Liebknecht and his second wife Natalie (née Reh), who also came from a family with a strong political background; her father, Karl, was a member of the Frankfurt Parliament of 1848.[2] Liebknecht's parents were second cousins; his maternal great-grandmother was the sister of one of his paternal great-grandfathers.[3]

His father was a co-founder with August Bebel of the Marxist Social Democratic Party of Germany (SPD). Karl Liebknecht became an exponent of Marxist ideas during his study of law and political economy in Leipzig and Humboldt University of Berlin. After serving with the Imperial Pioneer Guards in Potsdam from 1893 to 1894 and internships in Arnsberg and Paderborn from 1894 to 1898, he earned his doctorate at Würzburg in 1897 and moved to Berlin in 1899, where he opened a lawyer's office with his brother, Theodor. Liebknecht married Julia Paradies on 8 May 1900; the couple had two sons and a daughter before Julia died in 1911.[4] 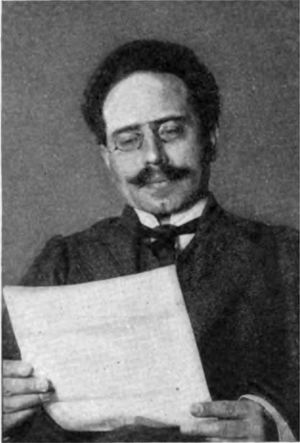 As a lawyer, Liebknecht often defended other left wing socialists who were tried for offences such as smuggling socialist propaganda into Russia, a task in which he was also involved. He became a member of the SPD in 1900 and was president of the Socialist Youth International from 1907 to 1910. Liebknecht also wrote extensively against militarism. In his speech at the Bremen party conference in 1904, he insisted to his audience that, "Militarism is our most deadly enemy and the best way of waging the struggle against it is to increase the number of social democrats among the soldiers."[5] One of his papers, Militarismus und Antimilitarismus ("militarism and antimilitarism") led to his being arrested in 1907 and imprisoned for 18 months in Glatz, Prussian Silesia. In the next year he was elected to the Prussian parliament, despite still being in prison.[6]

Liebknecht was an active member of the Second International and a founder of the Socialist Youth International. In 1912 Liebknecht was elected to the Reichstag as a Social-Democrat, a member of the SPD's left wing. He opposed Germany's participation in World War I, but in order not to infringe the party's unity he abstained from the vote on war loans on 4 August 1914.[7] On 2 December 1914 he was the only member of the Reichstag to vote against further loans, the supporters of which included 110 of his own Party members. He continued to be a major critic of the Social-Democratic leadership under Karl Kautsky and its decision to acquiesce in going to war. In October that year, he married his second wife, art historian Sophie Ryss.[6] 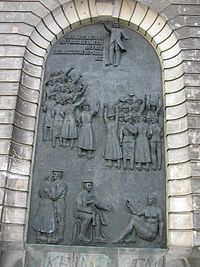 Karl Liebknecht proclaims the German Free Socialist Republic, 9 November 1918 (Mural, Hochschule für Musik, Berlin: the relief is one of a series on socialist themes on this building surviving from the German Democratic Republic)

At the end of 1914, Liebknecht, together with Rosa Luxemburg, Leo Jogiches, Paul Levi, Ernest Meyer, Franz Mehring and Clara Zetkin formed the so-called Spartacus League (Spartakusbund); the league publicized its views in a newspaper titled Spartakusbriefe ("Spartacus Letters") which was soon declared illegal. Liebknecht was arrested and sent to the eastern front during World War I despite his immunity as a member of parliament. Refusing to fight, he served burying the dead, and due to his rapidly deteriorating health was allowed to return to Germany in October 1915.

Liebknecht was arrested again following a demonstration against the war in Berlin on 1 May 1916 that was organized by the Spartacus League, and sentenced to two and a half years in jail for high treason,[8] which was later increased to four years and one month.

Liebknecht was released again in October 1918, when Max von Baden granted an amnesty to all political prisoners, on his return to Berlin on 23 October he was escorted to the Soviet embassy by a crowd of workers.[9] Following the outbreak of the German Revolution, Liebknecht carried on his activities in the Spartacist League; he resumed leadership of the group together with Luxemburg and published its party organ, Die Rote Fahne (The Red Flag).

On 9 November, Liebknecht declared the formation of a Freie Sozialistische Republik (Free Socialist Republic) from a balcony of the Berliner Stadtschloss, two hours after Philipp Scheidemann's declaration of a German Republic from a balcony of the Reichstag.[10] On 31 December 1918/1 January 1919, Liebknecht was involved in the founding of the Communist Party of Germany (KPD). Together with Luxemburg, Jogiches and Zetkin, Liebknecht was also instrumental in the January 1919 Spartacist uprising in Berlin. Initially he and Luxemburg opposed the revolt, but they joined it after it had begun. The uprising was brutally opposed by the new German government under Friedrich Ebert with the help of the remnants of the Imperial German Army and militias called the Freikorps. By 13 January, the uprising had been extinguished. Liebknecht and Luxemburg were captured by Freikorps troops on 15 January 1919 and brought to the Eden Hotel in Berlin, where they were tortured and interrogated for several hours.[11] Following this, Luxemburg was beaten with rifle butts and afterwards shot, her corpse thrown into a nearby river while Liebknecht was forced to step out of the car where he was being transported and then shot in his back. Official declarations said he had been shot in an attempt to escape. Although the circumstances were disputed by the perpetrators at the time, the Freikorps commander, Captain Waldemar Pabst, later claimed, "I had them executed".[12]

Clara Zetkin penned a moving obituary for Karl Liebknecht in September 1919,[13] and together with Rosa Luxemburg, Liebknect became a celebrated martyr of the German Left.[14] In 1930 the Soviet government renamed a village, near Kursk in central Russia, after him — Imeni Karla Libknekhta. Since 1919, an annual Liebknecht-Luxemburg Demonstration has been held in Berlin,[15] the world's largest funerary parade, and the biggest meeting of the German left. The annual "L-L Demo" is held on the second Sunday in January to this day,[16] and 14,000 people attended the rally in Karl Liebknecht and Rosa Luxemburg's honor in 2016.[17]