From Infogalactic: the planetary knowledge core
Jump to: navigation, search
This article is about the American herpetologist. For people with the same or similar names, see Carl Schmidt.

Schmidt was the son of George W. Schmidt and Margaret Patterson Schmidt. George W. Schmidt was a German professor who, at the time of Karl Schmidt's birth, was teaching in Lake Forest, Illinois. His family left the city in 1907 and settled in Wisconsin. They worked on a farm near Stanley, Wisconsin,[2] where his mother and his younger brother died in a fire on August 7, 1935. The brother, Franklin J. W. Schmidt, had been prominent in the then new field of wildlife management.[3] Karl Schmidt married Margaret Wightman in 1919, and they had two sons, John and Robert.[4]

In 1913, Schmidt entered Cornell University to study biology and geology. In 1915, he discovered his preference for herpetology during a four-month training course at the Perdee Oil Company in Louisiana. In 1916, he received the degree of Bachelor of Arts and made his first geological expedition to Santo Domingo. In 1952 he was awarded an honorary Doctor of Science degree by Earlham College.[4]

From 1916 to 1922, he worked as scientific assistant in herpetology at the American Museum of Natural History in New York, under the well-known American herpetologists Mary Cynthia Dickerson and Gladwyn K. Noble. He made his first collecting expedition to Puerto Rico in 1919, then became the assistant curator of reptiles and amphibians at the Field Museum of Natural History in Chicago in 1922. From 1923 to 1934, he made several collecting expeditions for that museum to Central and South America, which took him to Honduras (1923), Brazil (1926) and Guatemala (1933–1934). In 1937, he became the editor of the herpetology and ichthyology journal Copeia, a post he occupied until 1949. In 1938, he served in the U.S. Army. He became the chief curator of zoology at the Field Museum in 1941, where he remained until his retirement in 1955. From 1942 to 1946, he was the president of the American Society of Ichthyologists and Herpetologists (ASIH). In 1953, he made his last expedition, which was to Israel.

Self-documentation of his death

Schmidt died in 1957 after being bitten by a juvenile boomslang snake (Dispholidus typus). He wrongly believed that it could not produce a fatal dose. Following the bite, he made detailed notes on the symptoms he experienced, almost right up to the end.[5] Schmidt was asked just a few hours before he died if he wanted medical care, but he refused because it would upset the symptoms he was documenting. Boomslang venom works by causing so many small clots in the blood that the victim loses the ability to clot further and bleeds to death. He died 24 hours after the bite, bleeding in his lungs, kidneys, heart, and brain.[6] Marlin Perkins, who was then the director of the Lincoln Park Zoo, had sent the snake to Schmidt's lab at the Field Museum in Chicago for identification.[7][8]

Schmidt was one of the most important herpetologists in the 20th century. Though he made only a few important discoveries by himself, he named more than 200 species and was a leading expert on coral snakes.[5] His donation of over 15,000 titles of herpetological literature formed the foundation for The Karl P. Schmidt Memorial Herpetological Library located at the Field Museum.[6]

His writings reveal that he was generally a solid supporter of a W. D. Matthew brand of dispersalism of species.[5]

Many species and subspecies of amphibians and reptiles[9][10] are named in his honor, including the following. 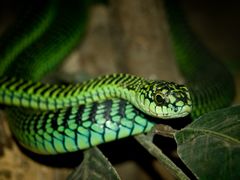 Schmidt was killed by the bite of a juvenile boomslang snake

Some taxa described by Karl Schmidt

He wrote more than 200 articles and books, including Living Reptiles of the World, which became an international bestseller.