Major Karl Plagge (July 10, 1897, in Darmstadt — June 19, 1957 in Darmstadt) was a Wehrmacht officer, engineer and Nazi Party member who during World War II used his position as a staff officer in the Heer (Army) to employ and protect some 1,240[1] Jews — 500 men, the others women and children, in order to give them a better chance to survive the nearly total annihilation of Lithuania’s Jews that took place between 1941–1944.

Plagge, a veteran of World War I, was initially drawn to the promises of Adolf Hitler and the Nazi Party to rebuild the German economy and national pride during the difficult years that Germany experienced after the signing of the Versailles Treaty. He joined the Nazi Party in 1931 and worked to further its stated goals of national rejuvenation. However, he began to come into conflict with the local party leadership over his refusal to teach Nazi racial theories, which, as a man of science, he did not believe. His continued refusal to espouse the Nazi racial teachings led to accusations that he was a “friend of Jews and Freemasons” by the local Darmstadt Nazi leadership in 1935, and he was removed from his leadership positions in the local party apparatus.[2]

Care for his workers

Plagge graduated from the Technical University of Darmstadt in 1924 with a degree in engineering. On being drafted into the Heer at the beginning of World War II, he was put in command of an engineering unit, HKP562, whose duties involved repairing military vehicles damaged on the Eastern Front. Plagge and his unit arrived in Vilnius (Vilna) in July 1941 and soon witnessed the genocide being carried out against the Jews of the area. Plagge would later testify that "I saw unbelievable things that I could not support...it was then that I began to work against the Nazis".[3]

Plagge, as a German, felt responsible for some of the horrors he witnessed and felt compelled to work against the genocidal machine. He did what he could to help some of Vilnius’ beleaguered Jews by giving work certificates to Jewish men, certifying them as essential and skilled workers regardless of their actual backgrounds. This kind of work permit protected the worker, his wife and two of his children from the SS sweeps carried out in the Vilna Ghetto in which Jews without work papers were captured and killed at the nearby Paneriai (Ponary) execution grounds. Plagge issued 250 of these life-saving permits to men, many of them without mechanical skills, thus protecting over 1,000 Jewish men, women and children from execution from 1941 to mid-1944.

Plagge supported his workers' survival by procuring extra food rations and supplying hot meals to the workers in his workshops (an unusual measure) to supplement their starvation rations. He also allowed his Jewish male workers to barter for food with his men as well as local gentiles within the workshops so that they could smuggle food back to their families in the ghetto (an illegal activity). Plagge also aided the survival of the Jews under his jurisdiction by providing warm clothing, medical supplies and firewood — all scarce commodities. On several occasions he and his subordinate officers helped secure the freedom of some of his workers or their family members when they were arrested during SS sweeps of the ghetto.

In September 1943 it became clear to Plagge that the Vilna Ghetto was soon to be liquidated. All the remaining Jews in the ghetto were to be taken by the SS, regardless of any working papers they had. In this crucial period Plagge made extraordinary bureaucratic efforts to form a free-standing HKP562 Slave Labor Camp on Subocz Street on the outskirts of Vilnius. Evidence shows that he not only tried to protect his productive male workers, but also made vigorous efforts to protect the women and children in his camp, actively overcoming considerable resistance from local SS officers.[4][5] On September 16, 1943, Plagge transported over 1,000 of his Jewish workers and their families from the Vilna Ghetto to the newly built HKP camp on Subocz Street, where they remained in relative safety.[6] Less than a week later, on September 23, 1943, the SS liquidated the Vilna Ghetto. The rest of Vilna's Jews were either executed immediately at the nearby execution grounds in the Paneriai (Ponary) Forest, or sent to death camps in Nazi occupied Europe.[7]

The conditions in the HKP camp were relatively benign, especially when compared with those in other slave labor camps across Nazi occupied Europe, with tolerable work conditions, and food at subsistence levels. Plagge ordered respectful treatment of the slave laborers and their families, instructing his officers that "the civilians are to be treated with respect". These instructions, transmitted through the example set by his subordinate officers, resulted in very little abuse by the men of his unit and the Lithuanian police who guarded the camp. In spite of the general benevolence of Plagge and his men, the SS controlled the ultimate fate of the HKP laborers.

The SS entered the camp on two occasions to commit atrocities, before finally liquidating most of the Jewish laborers in July 1944, shortly before the German retreat out of Vilnius. In November 1943, a Jewish prisoner named David Zalkind, his wife, and child attempted to escape from the camp and were caught by the Gestapo. They were publicly executed in the camp courtyard in front of the other prisoners. On March 27, 1944, while Plagge was away on home leave in Germany, the SS carried out a Kinder Aktion ("Children Operation"). They entered the camp, rounded up the vast majority of the camp’s 250 children and then transported them away from the camp to be killed (most likely at the killing grounds of Paneriai (Ponary). Thus both Plagge, his subordinates and the prisoners understood that ultimately the SS would decide the fate of the camp’s Jews.

File:Memorial to the Jews victims of Nazi Germany in Vilnius2.JPG
2A Holocaust memorial near the former camp, Subačiaus (Subocz) Street, Vilnius

In the summer of 1944 the Soviet Red Army advanced to the outskirts of Vilnius. This change in the tides of war brought both joy and fear to the surviving Jews of the HKP camp who understood that the SS would try to kill them in the days before the German retreat.[citation needed] Many prepared for this eventuality by discreetly making hiding places in the camp in secret bunkers, in walls, and in the rafters of the attic. A large and crucial unknown was one of timing — the prisoners needed to know when the SS killing squads were coming so they could successfully implement plans to escape or hide. As the sounds of fighting grew closer the level of tension within the camp became palpable.[citation needed]

On July 1, 1944, Major Plagge entered the camp and made an informal speech to the Jewish prisoners who gathered around him. In the presence of an SS officer he told the Jews present at his speech that he and his men were being relocated to the west, and that in spite of his requests, he did not have permission to take his skilled Jewish workers with his unit. However, he said that they should not worry, for they too would be relocated on Monday July 3, and that during this relocation they would be escorted by the SS, which as they knew was “an organization devoted to the protection of refugees”.[8]

With this covert warning from Plagge, over half the camp’s prisoners went into hiding before the SS death squads arrived on July 3, 1944. The 500 prisoners who did appear at roll call were taken to the forest of Paneriai (Ponary) and shot. Over the next three days the SS searched the camp and its surroundings. They found half of the missing prisoners, took them to the camp courtyard and shot them. However, when the Red Army captured Vilnius a few days later, some 250 of the camp’s Jews emerged from hiding.

Effectiveness of Plagge’s endeavors to save Jews

Mass executions in Vilnius (Vilna) and environs were carried out primarily in the Ponary massacre over the period between July 1941 and August 1944, in which 110,000 people were murdered. About 70,000 of these people were Jews of Lithuanian or other nationality; others were deported to Nazi extermination camps. Plagge tried to spare as many as he could from this by purposely recruiting Jews instead of Poles for labor.[9] His success was only partial; his unit had to retreat, thereby removing the slave-labor framework that had protected them until that point. The SS ultimately succeeded in murdering about 900 – 1000 of Plagge’s 1,250[10] slave-laborers between the Kinder-Aktion and the final liquidation of the camp.

The success of Plagge’s efforts to save Jews is manifested through a survival rate of about 20–25% among those he hired compared with the much lower rate of 3–5% — virtual annihilation — among the rest of Lithuania's Jews. The 250 to 300 surviving Jews of the HKP camp constituted the largest single group of survivors of the genocide in Vilnius.

Plagge’s efforts are corroborated by survivor testimony, historical documents found in Germany, and Plagge’s own testimony found in a letter he wrote in 1957, a year before his death. In this letter he compares himself with the character of Dr. Rieux in Albert Camus' novel The Plague and describes his hopeless struggle against a plague of death that slowly envelops the inhabitants of his city.[11] 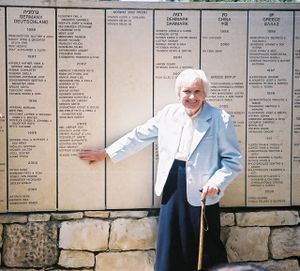 Entrance of the Major-Karl-Plagge Kaserne

After the war, Karl Plagge returned home to Darmstadt, Germany, where he was tried in 1947 as part of the postwar denazification process. Some of his former prisoners were in a displaced persons camp in Stuttgart and heard of the charges against him. They sent a representative, on their own initiative and unannounced, to testify on his behalf, and this testimony influenced the trial result in Plagge's favor.[12] The court wanted to award Plagge the status of an Entlasteter ("exonerated person") but on his own wish he was classified as a Mitläufer ("follower"). Like Oskar Schindler, Plagge blamed himself for not having done enough. After the trial Plagge lived the final decade of his life quietly and without fanfare before dying in Darmstadt in June 1957.

In April 2005 the Yad Vashem Holocaust Memorial posthumously bestowed the title “Righteous Among the Nations” on Plagge.[13]

In February 2006 the former Frankensteinkaserne, a Bundeswehr base in Pfungstadt, Germany, was renamed the Karl-Plagge-Kaserne.

A bust of Plagge was placed in the schoolyard of the Ludwig-Georgs-Gymnasium in Darmstadt, the oldest establishment of secondary higher education in the city.

A street in Darmstadt was named in honour of Plagge.

The Karl Plagge Award is donated by descendants of the family of Karl Plagge. It is awarded to school students in Lithuania who concentrate on the Jewish Lithuanian history more than required by the school curriculum. The Prize is awarded yearly and is supported by the Lithuanian Ministry of Education and Science.[14]

The prize money is donated privately by the Plagge family with the support of friends.