Karl Wahl was born as the thirteenth child of a boilerman in Aalen, then in the Kingdom of Württemberg, in 1892.

Upon finishing his schooling, he wished to join the Kaiserliche Marine but his father would not allow him. Instead, he entered the Bavarian Army in Aschaffenburg in 1910, signing on as a volunteer for two years. He became a paramedic in the army and was promoted to sergeant.

He served in the First World War as a paramedic but was wounded in 1915. After the war, he became a civil servant at the Augsburg city council, where he remained until 1933. His first position was at the city slaughterhouse.[1]

Wahl joined the SA (Storm troopers) and the NSDAP in 1922 and became the leader of the SA in Swabia in 1923. In 1928, he became a member of the Bavarian Landtag, the state parliament, a seat he held until 1933, when he was elected to the German Reichstag.

Wahl established the first Nazi-owned newspaper in Augsburg in 1931, the Neue National-Zeitung, which engaged in hate propaganda against Jews, the workers movement and the political opposition. The newspaper, under his leadership, also called for a boycott of Jewish businesses already in 1931.[2] 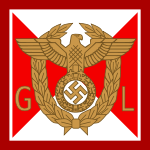 Vehicle insignia for a Gauleiter

Wahl became Gauleiter of Swabia on 1 October 1928 and held this position until the end of the Second World War in May 1945, when the Gaue were abolished. Originally, the office of Gauleiter was purely a party office, but with the Nazi Machtergreifung in January 1933, the position became much more an administrative one and by 1934, the Gauleiters had supplanted the still existing office of Minister President of Bavaria as the leading administrative authority in Bavaria.[3] Additionally, Wahl also held the office of Regierungspräsident (Head of Government) of Swabia from 1 July 1934, a state office, therefore combining civilian and party administration, like so many other Gauleiter.

In Swabia, a relatively small Gau, the local Gauleiter Wahl had to initially fend off attempts by his more powerful neighbor, Adolf Wagner, Gauleiter of the Munich-Upper Bavaria region, to incorporate Swabia into his Gau.[4] Wahl was the only one of the Bavarian Gauleiter not to have graduated from university.[5] Unlike Wagner, who was a personal friend of Hitler, Wahl wielded no real influence with the party leadership.

The Gauleiter was directly appointed by Hitler and only answerable to him. In practice, Hitler interfered little in the affairs of the local leaders and their power was almost absolute.[6]

Wahl joined the SS and was promoted to SS-Gruppenführer on 9 September 1934.

In his time as Gauleiter, Wahl, raised a Protestant but married to a Roman Catholic, enjoyed good relations with the church, something not appreciated within the higher party ranks, especially by Himmler and Bormann.[7] He nevertheless held a close friendship to Auxiliary Bishop Franz Xaver Eberle (1874-1951) of Augsburg throughout the time of the Third Reich and Hitler himself complimented Wahl in 1937, saying "Wahl, your auxiliary bishop is the most sympathetic priest that I have ever met".[8]

On 12 July 1938, Wahl presided over the annexation of Jungholz and the Kleinwalsertal to the Gau Schwaben. Both communities had previously been part of Austria but could only be reached overland from Swabia. Both were returned to Austria in September 1945.[9]

With the beginning of the Second World War, Wahl noticed that the excitement within the German population for another war was very limited. Compared to the patriotism he encountered and felt himself in 1914, he now mostly felt people were resigned and stunned in the face of another conflict.[10]

In May 1941, he gave a rather telling speech at the Messerschmitt factory, voicing his belief in Hitler and his mission from God to punish all people and countries which have strayed from the path of decency. He denounced the leaders of many of the countries Germany had defeated as cowards, due to the fact that they fled to England and elsewhere rather than stayed or died with their people and soldiers.[11] A short recording of part of this speech has been preserved.

He also spent six weeks with a Swabian mountain division (German:Gebirgsjäger) in the Donetsk region.[12]

He was promoted to SS-Obergruppenführer on 1 August 1944.

With the worsening war situation, Wahl and the Gau Schwaben came under the military command of Paul Giesler in 1944, who was in charge of Swabia and three of the formerly Austrian Gaue.[13]

He met Hitler for the last time on 25 February 1945 in Berlin. Wahl was well aware then that the war was lost. The latter issued on this occasion in front of a large number of Gauleiter the statement that "the German people did not have the inner strength they were perceived to have" and therefore were losing the war. Wahl attributed this harsh statement to the stress the Führer was in and perceived him to be mortally ill. Nevertheless, he could not understand why Hitler continued the war.

In the last days of the war, Wahl made no effort to prevent the handover of Augsburg to the allies, knowing full well that the city could not be defended; shortly after he was arrested.[14]

Wahl, Gauleiter of Swabia for almost 17 years, only served a light sentence after the war, being sentenced to 3½ years and loss of all personal funds on 17 December 1948. In this sentence, the 3½ years spent in captivity from April 1945 to September 1948 was credited, meaning he was released without any further time in jail. The majority of his personal funds were later restored to him, losing only 10%.[15] He was downgraded from a group-I war criminal to a group-II, which explains the refund of parts of his funds.

After his time in prison, he changed his profession and became a textile merchant. After receiving permission from the denazification authorities, he started writing his autobiography in 1952 and 1953, which was published in Augsburg in 1954.[17]

He later worked in the library of the Messerschmitt factory from 1958 to 1968, thanks to his friendship with Willy Messerschmitt, established in the Nazi era.[18]

His grave in Augsburg-Göggingen, where he is buried together with his wife, carries the message: "Do not tire of doing good deeds" (German: Werdet nicht müde das Gute zu tun).[19]

War crimes and the Holocaust

In his book, Wahl claimed, like many Germans and even Nazis, not to have known about the Holocaust. He states that he was approached by soldiers of the Wehrmacht, returning on front leave to Swabia, who told him of the extermination of Jewish people in Eastern Europe. Wahl further says, he contacted a personal friend at the Reichssicherheitshauptamt to enquire whether there was any substance to the rumour and was told it was a lie. He was asked to disclose the names of the soldiers who had approached him.

Wahl's own statement after the war was that "nobody could be found in Swabia who had personally been harmed by him", but makes no reference to the last 500 Jewish citizens of Augsburg, who disappeared in Nazi concentration camps in the years following the Kristallnacht, when the Augsburg Synagogue was destroyed.[2]

In The End, Ian Kershaw describes him as "one of the less extreme of the Gauleiter" who in spite of his seniority (via early party membership) "did not stand high in the esteem of Hitler and Bormann" and contrasts Wahl's relative apathy towards the regime's exhortations to fight to the last man with the well-documented fanaticism and cruelty of several other Gauleiters. Kershaw points out, however, that Wahl did advocate to Bormann the use of kamikaze-like suicide attacks with bomb-laden aircraft on US supply bridges over the Rhine. Kershaw posits that Wahl could have made such a suggestion as a means of affirming loyalty to the regime in its final months, when reprisals against defeatist sentiment were at their height.

Apart from being Gauleiter of Swabia, Wahl also held the following offices and memberships within the Nazi organisation:

Wahl published an autobiography in Augsburg in 1954, being the first former Gauleiter to do so after the war:[17]

He also later published a second book in Offenbach am Main in 1973: