Karl Ritter von Frisch, ForMemRS[1] (20 November 1886 – 12 June 1982) was an Austrian ethologist who received the Nobel Prize in Physiology or Medicine in 1973, along with Nikolaas Tinbergen and Konrad Lorenz.[2][3]

His work centered on investigations of the sensory perceptions of the honey bee and he was one of the first to translate the meaning of the waggle dance. His theory, described in his 1927 book Aus dem Leben der Bienen (translated into English as The Dancing Bees), was disputed by other scientists and greeted with skepticism at the time. Only much later was it shown to be an accurate theoretical analysis.[4]

Karl von Frisch was the son of the surgeon and urologist Anton von Frisch (1849-1917), by his marriage to Marie Exner. He was the youngest of four sons, all of whom became university professors. He studied in Vienna under Hans Leo Przibram and in Munich under Richard von Hertwig, initially in the field of medicine, but later turned to the natural sciences. He received his doctorate in 1910 and in the same year started work as an assistant in the zoology department of the University of Munich. In 1912 he became a lecturer in zoology and comparative anatomy there; and in 1919 was promoted to a professorship. His research on honeybees was continued by his student Ingeborg Beling. In 1921 he went to Rostock University as a professor of zoology and director of an institute. In 1923 he accepted the offer of a chair at Breslau University, returning in 1925 to Munich University, where he became the head of the institute of zoology.

In 1933 the Nazi regime passed the Civil Service Law, requiring all public servants to provide proof of Aryan ancestry. Frisch was unable to account for the ancestry of one of his grandparents, and was therefore classified as a mischling of 1/8th Jewish ancestry, but formally allowed to keep his job. However groups of students and lecturers worked to have him dismissed from the university, preferring a committed National Socialist. Frisch also attracted negative attention for employing Jewish assistants, including many women, and for practicing "Jewish science". Eventually Frisch was forced into retirement, but the decision was reversed due to advances in his research on combating nosema infections in bees and his forced retirement was postponed until after the war. Frisch also worked actively to help Polish scientists who had been singled out for internment by the Gestapo.[5]

The institute of zoology was destroyed in the Second World War, and in 1946 Frisch went to work at the University of Graz, remaining there until 1950, when he returned to the Munich institute after it was reopened. He retired in 1958 but continued his research. 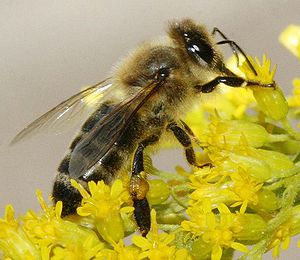 Sense of smell: Frisch discovered that bees can distinguish various blossoming plants by their scent, and that each bee is "flower constant".[6] Surprisingly, their sensitivity to a "sweet" taste is only slightly stronger than in humans. He thought it possible that a bee’s spatial sense of smell arises from the firm coupling of its olfactory sense with its tactile sense.

Optical perception: Frisch was the first to demonstrate that honey bees had color vision,[citation needed] which he accomplished by using classical conditioning. He trained bees to feed on a dish of sugar water set on a colored card. He then set the colored card in the middle of a set of gray-toned cards. If the bees see the colored card as a shade of gray, then they will confuse the blue card with at least one of the gray-toned cards; bees arriving to feed will visit more than one card in the array. On the other hand, if they have color vision, then the bees visit only the blue card, as it is visually distinct from the other cards. A bee’s color perception is comparable to that of humans, but with a shift away from the red toward the ultraviolet part of the spectrum. For that reason bees cannot distinguish red from black (colorless), but they can distinguish the colors white, yellow, blue and violet. Color pigments which reflect UV radiation expand the spectrum of colors which can be differentiated. For example, several blossoms which may appear to humans to be of the same yellow color will appear to bees as having different colors (multicolored patterns) because of their different proportions of ultraviolet.

Powers of orientation: Frisch’s investigation of a bee’s powers of orientation were significant. He discovered that bees can recognize the desired compass direction in three different ways: by the sun, by the polarization pattern of the blue sky, and by the earth’s magnetic field, whereby the sun is used as the main compass, with the alternatives reserved for the conditions arising under cloudy skies or within a dark beehive.[7]

Polarization pattern: Light scattered in a blue sky forms a characteristic pattern of partially polarized light which is dependent on the position of the sun and invisible to human eyes. With a UV receptor in each of the lens units of a compound eye, and a UV filter oriented differently in each of these units, a bee is able to detect this polarization pattern. A small piece of blue sky is enough for a bee to recognize the pattern changes occurring over the course of a day. This provides not only directional but also temporal information.

Internal clock: Bees have an internal clock with three different synchronization or timekeeping mechanisms. If a bee knows the direction to a feeding place found during a morning excursion, it can also find the same location, as well as the precise time at which this source provides food, in the afternoon, based on the position of the sun.[8]

Horizontal orientation of the honeycomb: Based on the magnetic field, the alignment of the plane of a honeycomb under construction (e.g., the new honeycomb of a swarm) will be the same as that of the home hive of the swarm, according to Frisch. By experiment, even deformed combs bent into a circle can be produced.

Sensing the vertical: The vertical alignment of the honeycomb is attributed by Frisch to the ability of bees to identify what is vertical with the help of their head used as a pendulum together with a ring of sensory cells in the neck.

Knowledge about feeding places can be relayed from bee to bee. The means of communication is a special dance of which there are two forms:

The "round dance" provides the information that there is a feeding place in the vicinity of the beehive at a distance between 50 and 100 meters, without the particular direction being given. By means of close contact among the bees it also supplies information about the type of food (blossom scent).

The foraging bee... begins to perform a kind of "round dance". On the part of the comb where she is sitting she starts whirling around in a narrow circle, constantly changing her direction, turning now right, now left, dancing clockwise and anti-clockwise, in quick succession, describing between one and two circles in each direction. This dance is performed among the thickest bustle of the hive. What makes it so particularly striking and attractive is the way it infects the surrounding bees; those sitting next to the dancer start tripping after her, always trying to keep their outstretched feelers on close contact with the tip of her abdomen.... They take part in each of her manoeuvrings so that the dancer herself, in her mad wheeling movements, appears to carry behind her a perpetual comet’s tail of bees.[9] 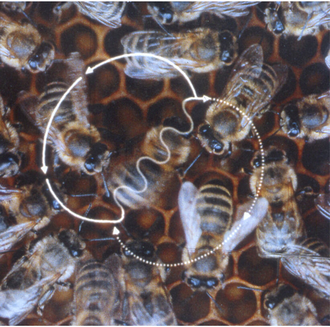 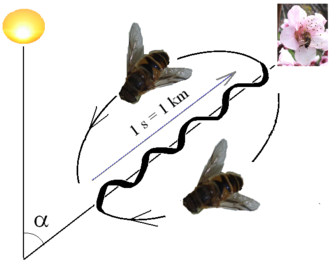 Interpretation of the waggle dance: direction relative to the sun is shown by angle to the vertical; distance by the time taken on the central stretch.

The "waggle dance" is used to relay information about more distant food sources. In order to do this, the dancing bee moves forward a certain distance on the vertically hanging honeycomb in the hive, then traces a half circle to return to her starting point, whereupon the dance begins again. On the straight stretch, the bee "waggles" with her posterior. The direction of the straight stretch contains the information about the direction of the food source, the angle between the straight stretch and the vertical being precisely the angle which the direction of flight has to the position of the sun. The distance to the food source is relayed by the time taken to traverse the straight stretch, one second indicating a distance of approximately one kilometer (so the speed of the dance is inversely related to the actual distance). The other bees take in the information by keeping in close contact with the dancing bee and reconstructing its movements. They also receive information via their sense of smell about what is to be found at the food source (type of food, pollen, propolis, water) as well as its specific characteristics. The orientation functions so well that the bees can find a food source with the help of the waggle dance even if there are hindrances they must detour around like an intervening mountain.

As to a sense of hearing, Frisch could not identify this perceptive faculty, but it was assumed that vibrations could be sensed and used for communication during the waggle dance. Confirmation was later provided by Dr. Jürgen Tautz, a bee researcher at Würzburg University’s Biocenter.[10]

The linguistic findings described above were based on Frisch’s work primarily with the Carnica variety of bees. Investigations with other varieties led to the discovery that language elements were variety-specific, so that how distance and direction information is relayed varies greatly.

Frisch advocated the use of eugenics as far as preventing, through sterilisation, people with hereditary diseases from reproducing (giving as examples deafness, blindness, haemophilia and crippled limbs). However, he cautioned that:

"such action certainly represents a great restriction of personal liberty and it demands the highest ethical integrity of those men who are responsible for its application".

He hoped that this could be introduced through voluntary schemes and education about family planning.[11]