Karlivka (Ukrainian: Карлівка; Russian: Карловка, Karlovka) is a village in Marinka Raion of Donetsk Oblast in eastern Ukraine. It lies approximately 10 miles west of Donetsk, adjacent to Highway M04, on the southern side of the Karlivske Reservoir. 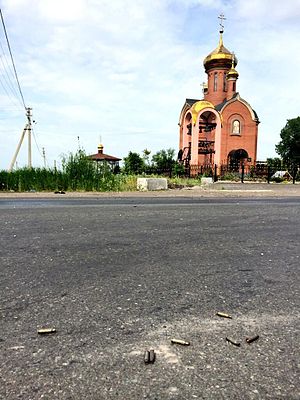 Church of Holy Epiphany in Karlovka, Donetsk Oblast, on 23 May 2014, shells on road from fighting between Ukrainian forces and pro-Russian separatists.