From Infogalactic: the planetary knowledge core
Jump to: navigation, search
For other uses, see Karst (disambiguation). 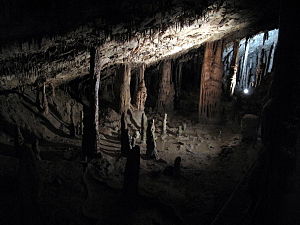 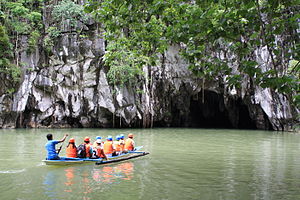 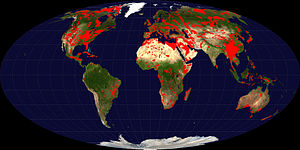 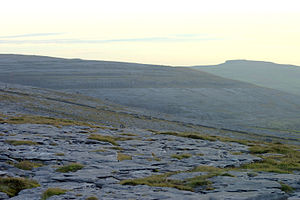 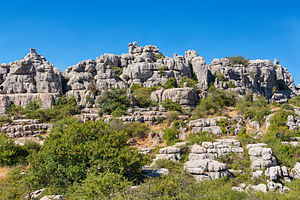 Karst topography is a landscape formed from the dissolution of soluble rocks such as limestone, dolomite, and gypsum. It is characterized by underground drainage systems with sinkholes, dolines, and caves.[1] It has also been documented for weathering-resistant rocks, such as quartzite, given the right conditions.[2] Subterranean drainage may limit surface water with few to no rivers or lakes. However, in regions where the dissolved bedrock is covered (perhaps by debris) or confined by one or more superimposed non-soluble rock strata, distinctive karst surface developments might be totally missing.

The English word karst was borrowed from German Karst in the late 19th century.[3] The German word came into use before the 19th century.[4] According to the prevalent interpretation, the term is derived from the German name for the Kras region (Italian: Carso), a limestone plateau surrounding the city of Trieste in the northern Adriatic (nowadays, located on the border between Slovenia and Italy, in the 19th century part of the Austrian Littoral).[5] Scholars disagree, however, on whether the German word (which shows no metathesis) was borrowed from Slovene.[6][7] The Slovene common noun kras was first attested in the 18th century, and the adjective form kraški in the 16th century.[8] As a proper noun, the Slovene form Grast was first attested in 1177,[9] referring to the Karst Plateau—a region in Slovenia partially extending into Italy, where the first research on karst topography was carried out. The Slovene words arose through metathesis from the reconstructed form *korsъ,[8] borrowed from Dalmatian Romance carsus.[9] Ultimately, the word is of Mediterranean origin,[9] believed to derive from some Romanized Illyrian base.[8] It has been suggested that the word may derive from the Proto-Indo-European root karra- "rock".[9][10] The name may also be connected to the oronym Kar(u)sádios oros cited by Ptolemy, and perhaps also to Latin Carusardius.[8][9] 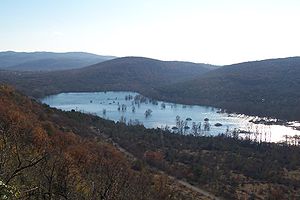 Karst lake (Doberdò del Lago, Italy) fed by an underground water source into a depression with no surface inlet or outlet 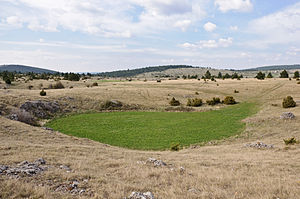 The development of karst occurs whenever acidic water starts to break down the surface of bedrock near its cracks, or bedding planes. As the bedrock (like limestone or dolostone) continues to break down, its cracks tend to get bigger. As time goes on, these fractures will become wider, and eventually, a drainage system of some sort may start to form underneath. If this underground drainage system does form, it will speed up the development of karst arrangements there because more water will be able to flow through the region. [11]

The carbonic acid that causes these features is formed as rain passes through the atmosphere picking up carbon dioxide (CO2), which dissolves in the water. Once the rain reaches the ground, it may pass through soil that can provide much more CO2 to form a weak carbonic acid solution, which dissolves calcium carbonate. The primary reaction sequence in limestone dissolution is the following: 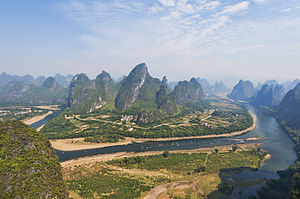 In particular and very rare conditions such as encountered in the past in Lechuguilla Cave in New Mexico (and more recently in the Frasassi Caves in Italy), other mechanisms may also play a role. The oxidation of sulfides leading to the formation of sulfuric acid can also be one of the corrosion factors in karst formation. As oxygen (O2)-rich surface waters seep into deep anoxic karst systems, they bring oxygen, which reacts with sulfide present in the system (pyrite or H2S) to form sulfuric acid (H2SO4). Sulfuric acid then reacts with calcium carbonate, causing increased erosion within the limestone formation. This chain of reactions is: 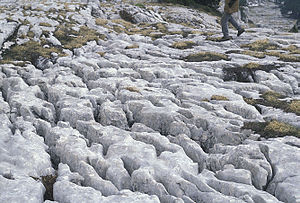 The karstification of a landscape may result in a variety of large- or small-scale features both on the surface and beneath. On exposed surfaces, small features may include flutes, runnels, clints and grikes, collectively called karren or lapiez. Medium-sized surface features may include sinkholes or cenotes (closed basins), vertical shafts, foibe (inverted funnel shaped sinkholes), disappearing streams, and reappearing springs. Large-scale features may include limestone pavements, poljes, and karst valleys. Mature karst landscapes, where more bedrock has been removed than remains, may result in karst towers, or haystack/eggbox landscapes. Beneath the surface, complex underground drainage systems (such as karst aquifers) and extensive caves and cavern systems may form.

Erosion along limestone shores, notably in the tropics, produces karst topography that includes a sharp makatea surface above the normal reach of the sea and undercuts that are mostly the result of biological activity or bioerosion at or a little above mean sea level. Some of the most dramatic of these formations can be seen in Thailand's Phangnga Bay and Halong Bay in Vietnam.

Calcium carbonate dissolved into water may precipitate out where the water discharges some of its dissolved carbon dioxide. Rivers which emerge from springs may produce tufa terraces, consisting of layers of calcite deposited over extended periods of time. In caves, a variety of features collectively called speleothems are formed by deposition of calcium carbonate and other dissolved minerals. 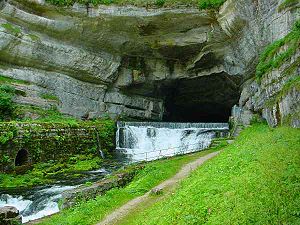 Farming in karst areas must take into account the lack of surface water. The soils may be fertile enough, and rainfall may be adequate, but rainwater quickly moves through the crevices into the ground, sometimes leaving the surface soil parched between rains.

A karst fenster occurs when an underground stream emerges onto the surface between layers of rock, cascades some distance, and then disappears back down, often into a sinkhole. Rivers in karst areas may disappear underground a number of times and spring up again in different places, usually under a different name (like Ljubljanica, the river of seven names). An example of this is the Popo Agie River in Fremont County, Wyoming. At a site simply named "The Sinks" in Sinks Canyon State Park, the river flows into a cave in a formation known as the Madison Limestone and then rises again 800 m (1⁄2 mi) down the canyon in a placid pool. A turlough is a unique type of seasonal lake found in Irish karst areas which are formed through the annual welling-up of water from the underground water system.

Water supplies from wells in karst topography may be unsafe, as the water may have run unimpeded from a sinkhole in a cattle pasture, through a cave and to the well, bypassing the normal filtering that occurs in a porous aquifer. Karst formations are cavernous and therefore have high rates of permeability, resulting in reduced opportunity for contaminants to be filtered. Groundwater in karst areas is just as easily polluted as surface streams. Sinkholes have often been used as farmstead or community trash dumps. Overloaded or malfunctioning septic tanks in karst landscapes may dump raw sewage directly into underground channels.

The karst topography also poses difficulties for human inhabitants. Sinkholes can develop gradually as surface openings enlarge, but progressive erosion is frequently unseen until the roof of an underground cavern suddenly collapses. Such events have swallowed homes, cattle, cars, and farm machinery. In the United States, such a cavern-sinkhole swallowed part of the collection of the National Corvette Museum in Bowling Green, Kentucky in 2014.[13]

Interstratal karst is a karstic landscape which is developed beneath a cover of insoluble rocks. Typically this will involve a cover of sandstone overlying limestone strata undergoing solution. In the United Kingdom extensive doline fields developed at Mynydd Llangynidr across a plateau of Twrch Sandstone overlying concealed Carboniferous Limestone.[14]

Kegelkarst is a type of tropical karst terrain with numerous cone-like hills, formed by cockpits, mogotes and poljes and without strong fluvial erosion processes. It is found in: Cuba, Jamaica, Indonesia, Malaysia, the Philippines and Puerto Rico, South China and Vietnam.[15]

Pseudokarsts are similar in form or appearance to karst features but are created by different mechanisms. Examples include lava caves and granite tors—for example, Labertouche Cave in Victoria, Australia and paleocollapse features. Mud Caves are an example of pseudokarst.

The world's largest limestone karst is Australia's Nullarbor Plain. Slovenia has the world's highest risk of sinkholes, while the western Highland Rim in the eastern United States is at the second-highest risk of karst sinkholes.[16][17]

Chocolate Hills of the Philippines, is also a notable karst topography. They are conical karst hills widespread in a region of an island called Bohol.

The Ozark Plateau Ozarks of southern Missouri and northern Arkansas.

The Arbuckle Mountains of south central Oklahoma contain intensely folded and faulted carbonate beds that have produced some of the highest densities of karst features found in the United States. Due to the nature of the uplifted beds, the Arbuckle Mountains contains a sequence of limestone ridges and shale valleys. This causes waterfalls to develop where creeks descend over a limestone ridge into a shale valley. Because the waters are rich in calcium carbonate dissolved from the karst system, large deposits of travertine have accumulated on the waterfalls where turbulence causes mineral precipitation. The most notable of these waterfalls is Turner Falls near the city of Davis. 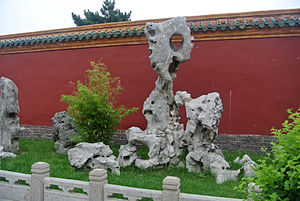 In 1689, Johann Weikhard von Valvasor, a pioneer of the study of karst in Slovenia and a fellow of the Royal Society for Improving Natural Knowledge, London, introduced the word karst to European scholars, describing the phenomenon of underground flows of rivers in his account of Lake Cerknica.[18]

In 1893, Jovan Cvijić in his Das Karstphänomen theorized holo-karst as the type found along the eastern Adriatic Sea, and mero-karst imperfectly developed with some karst forms as the type of karst that is found in eastern Serbia. He claimed that most types of dolines, "the diagnostic karst landforms", were created by rock dissolution.[citation needed]