From Infogalactic: the planetary knowledge core
Jump to: navigation, search
For other uses, see Karuk (disambiguation).

The Karuk people are an indigenous people of California and the Karuk Tribe is one of the largest tribes in California.[3] Karuks are also enrolled in two other federally recognized tribes, the Cher-Ae Heights Indian Community of the Trinidad Rancheria[4] and the Quartz Valley Indian Community.

Happy Camp, California is located in the heart of the Karuk Tribe's ancestral territory, which extends along the Klamath River from Bluff Creek (near the community of Orleans in Humboldt County) through Siskiyou County and into Southern Oregon.[5]

The Karuk people speak the Karuk language, a language belonging to the Hokan language family.[9][5] The tribe has an active language revitalization program.[10]

Estimates for the pre-contact populations of most native groups in California have varied substantially.[11] Alfred L. Kroeber proposed a population for the Karuk of 1,500 in 1770. Sherburne F. Cook initially estimated it as 2,000, later raising this figure to 2,700.[12][13] In 1910, Kroeber reported the surviving population of the Karuk as 800.[6]:883 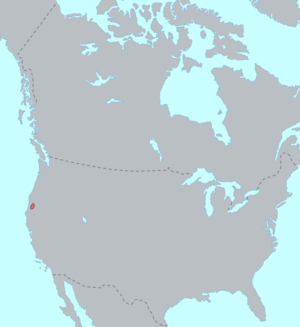 Pre-contact distribution of the Karuk

Since time immemorial, the Karuk resided in villages along the Klamath River, where they continue such cultural traditions as hunting, gathering, fishing, basket making and ceremonial dances.[5] The Karuk were the only California tribe to grow tobacco plants.[7] The Brush Dance, Jump Dance and Pikyavish ceremonies last for several days and are practiced to heal and "fix the world," to pray for plentiful acorns, deer and salmon, and to restore social good will as well as individual good luck.[5]

In the summers of 1871 and 1872 an amateur ethnographer by the name of Stephen Powers visited Indian groups in Northern California. His published observations offer an insight into the lives of the native survivors of the California Gold Rush. According to Powers, the Karok (Karuk) were one of three groups living on the Klamath River (the others being the Yurok and Modoc). He also noted that there was no recollection of any ancient migration to the region; instead there were legends of Creation and the Flood which were fabled to have occurred on the Klamath.[14]:21

Some of Powers' other observations were:

"The Karok are very democratic. They have a headman or captain in each rancheria, though when on the war-path they are in a slight degree subject to the control of one chief…In war they do not take scalps, but decapitate the slain and bring in the heads as trophies. They do battle with bows and arrows, and in a hand-to-hand encounter, which often occurs, they clutch ragged stones in their hands and maul each other with terrible and deadly effect"[14]:21

"There are two classes of shamans—the root doctors and the barking doctors… It is the province of the barking-doctor to diagnose the case, which she (most doctors are women) does by squatting down… before the patient, and barking at him… for hours together. After her comes the root-doctor, and with numerous potions, poultices, etc., seeks to medicate the part where the other has discovered the ailment resides."[14]:26

"The first of September brings a red-letter day in the Karok ephemeris, the great Dance of Propitiation, at which all the tribe are present, together with the deputations from the Yurok, the Hupa, and others. They call it sif-san-di pik-i-a-vish…which signifies, literally, "working the earth". The object of it is to propitiate the spirits of the earth and the forest, in order to prevent disastrous landslides, forest fires, earthquakes, drought, and other calamities."[14]:28

The Karuk developed sophisticated usage of plants and animals for their subsistence. These practices not only consisted of food harvesting from nature, but also the use of plant and animal materials as tools, clothing and pharmaceuticals. The Karuk cultivated a form of tobacco,[7] and used fronds of the Coastal woodfern, Dryopteris arguta as anti-microbial agents in the process of preparing eels for food consumption.[15]