Kazimir Severinovich Malevich[nb 1] (February 23, 1878 – May 15, 1935) was a Russian painter and art theoretician.[1] He was a pioneer of geometric abstract art and the originator of the avant-garde Suprematist movement.[2][3][4]

Kazimir Malevich was born Kazimierz Malewicz to a Polish family,[5][6] who settled near Kiev in the Kiev Governorate of the Russian Empire during the partitions of Poland.[7] His parents, Ludwika and Seweryn Malewicz, were Roman Catholic like most ethnic Poles.[1] They both had fled from the former eastern territories of the Commonwealth (present-day Kopyl Region of Belarus) to Kiev in the aftermath of the failed Polish January Uprising of 1863 against the tsarist army.[8] His native languages were Polish and Russian.[9]

Kazimir's father managed a sugar factory. Kazimir was the first of fourteen children,[7] only nine of whom survived into adulthood. His family moved often and he spent most of his childhood in the villages of Ukraine, amidst sugar-beet plantations, far from centers of culture. Until age twelve he knew nothing of professional artists, although art had surrounded him in childhood. He delighted in peasant embroidery, and in decorated walls and stoves. He was able to paint in the peasant style. He studied drawing in Kiev from 1895 to 1896. 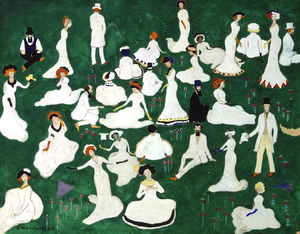 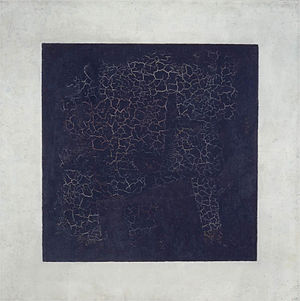 From 1896 to 1904 Kazimir Malevich lived in Kursk. In 1904, after the death of his father, he moved to Moscow. He studied at the Moscow School of Painting, Sculpture, and Architecture from 1904 to 1910 and in the studio of Fedor Rerberg in Moscow (1904 to 1910). In 1911 he participated in the second exhibition of the group, Soyuz Molodyozhi (Union of Youth) in St. Petersburg, together with Vladimir Tatlin and, in 1912, the group held its third exhibition, which included works by Aleksandra Ekster, Tatlin, and others. In the same year he participated in an exhibition by the collective, Donkey's Tail in Moscow. By that time his works were influenced by Natalia Goncharova and Mikhail Larionov, Russian avant-garde painters, who were particularly interested in Russian folk art called lubok. Malevich described himself as painting in a "Cubo-Futuristic" style in 1912.[11] In March 1913 a major exhibition of Aristarkh Lentulov's paintings opened in Moscow. The effect of this exhibition was comparable with that of Paul Cézanne in Paris in 1907, as all the main Russian avant-garde artists of the time (including Malevich) immediately absorbed the cubist principles and began using them in their works. Already in the same year the Cubo-Futurist opera, Victory Over the Sun, with Malevich's stage-set, became a great success. In 1914 Malevich exhibited his works in the Salon des Indépendants in Paris together with Alexander Archipenko, Sonia Delaunay, Aleksandra Ekster, and Vadim Meller, among others.[citation needed] Malevich also co-illustrated, with Pavel Filonov, Selected Poems with Postscript, 1907–1914 by Velimir Khlebnikov and another work by Khlebnikov in 1914 titled Roar! Gauntlets, 1908–1914, with Vladimir Burliuk.[12][13] 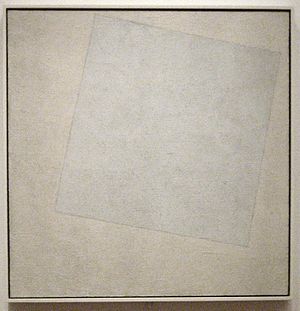 In 1915, Malevich laid down the foundations of Suprematism when he published his manifesto, From Cubism to Suprematism. In 1915–1916 he worked with other Suprematist artists in a peasant/artisan co-operative in Skoptsi and Verbovka village. In 1916–1917 he participated in exhibitions of the Jack of Diamonds group in Moscow together with Nathan Altman, David Burliuk, Aleksandra Ekster and others. Famous examples of his Suprematist works include Black Square (1915)[14] and White On White (1918). 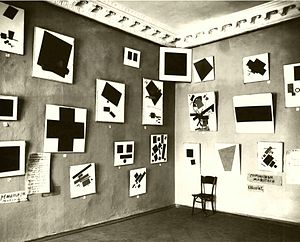 A section of Suprematist works by Kazimir Malevich exhibited at the 0.10 Exhibition, Petrograd, 1915

Malevich exhibited his first Black Square, now at the Tretyakov Gallery in Moscow, at the Last Futurist Exhibition 0,10 in Petrograd in 1915.[11] A black square placed against the sun appeared for the first time in the 1913 scenery designs for the Futurist opera Victory over the Sun.[11] The second Black Square was painted around 1923. Some believe that the third Black Square (also at the Tretyakov Gallery) was painted in 1929 for Malevich's solo exhibition, because of the poor condition of the 1915 square. One more Black Square, the smallest and probably the last, may have been intended as a diptych together with the Red Square (though of smaller size) for the exhibition Artists of the RSFSR: 15 Years, held in Leningrad (1932). The two squares, Black and Red, were the centerpiece of the show. This last square, despite the author's note 1913 on the reverse, is believed to have been created in the late twenties or early thirties, for there are no earlier mentions of it.[15]

He also was interested in aerial photography and aviation, which led him to abstractions inspired by or derived from aerial landscapes. As Julia Bekman Chadaga (now of Macalaster College [1]) writes:

In his later writings, Malevich defined the "additional element" as the quality of any new visual environment bringing about a change in perception... In a series of diagrams illustrating the "environments" that influence various painterly styles, the Suprematist is associated with a series of aerial views rendering the familiar landscape into an abstraction... (excerpted from Bekman Chadaga's paper delivered at Columbia University's 2000 symposium, "Art, Technology, and Modernity in Russia and Eastern Europe") 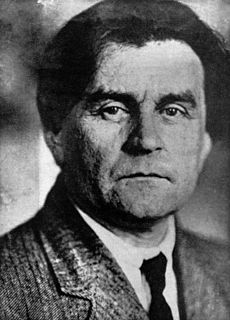 Some Ukrainian authors claim that Malevich's Suprematism is rooted in the traditional Ukrainian culture.[16][17]

After the October Revolution (1917), Malevich became a member of the Collegium on the Arts of Narkompros, the Commission for the Protection of Monuments and the Museums Commission (all from 1918–1919). He taught at the Vitebsk Practical Art School in the USSR (now part of Belarus) (1919–1922), the Leningrad Academy of Arts (1922–1927), the Kiev State Art Institute (1927–1929), and the House of the Arts in Leningrad (1930). He wrote the book The World as Non-Objectivity, which was published in Munich in 1926 and translated into English in 1959. In it, he outlines his Suprematist theories.

In 1923, Malevich was appointed director of Petrograd State Institute of Artistic Culture, which was forced to close in 1926 after a Communist party newspaper called it "a government-supported monastery" rife with "counterrevolutionary sermonizing and artistic debauchery." The Soviet state was by then heavily promoting a politically sustainable style of art called Socialist Realism—a style Malevich had spent his entire career repudiating. Nevertheless, he swam with the current, and was quietly tolerated by the Communists.[18]

In 1927, Malevich traveled to Warsaw where he was given a hero's welcome.[5] There he met with artists and former students Władysław Strzemiński and Katarzyna Kobro, whose own movement, Unism, was highly influenced by Malevich.[19] He held his first foreign exhibit in the Hotel Polonia Palace.[20] From there the painter ventured on to Berlin and Munich for a retrospective which finally brought him international recognition. He arranged to leave most of the paintings behind when he returned to the Soviet Union. Malevich's assumption that a shifting in the attitudes of the Soviet authorities toward the modernist art movement would take place after the death of Vladimir Lenin and Leon Trotsky's fall from power was proven correct in a couple of years, when the Stalinist regime turned against forms of abstraction, considering them a type of "bourgeois" art, that could not express social realities. As a consequence, many of his works were confiscated and he was banned from creating and exhibiting similar art.

Critics derided Malevich's art as a negation of everything good and pure: love of life and love of nature. The Westernizer artist and art historian Alexandre Benois was one such critic. Malevich responded that art can advance and develop for art's sake alone, saying that "art does not need us, and it never did".

When Malevich died of cancer at the age of fifty-seven, in Leningrad on 15 May 1935, his friends and disciples buried his ashes in a grave marked with a black square. They didn’t fulfill his stated wish to have the grave topped with an “architekton”—one of his skyscraper-like maquettes of abstract forms, equipped with a telescope through which visitors were to gaze at Jupiter.[21]

On his deathbed Malevich had been exhibited with the Black Square above him, and mourners at his funeral rally were permitted to wave a banner bearing a black square.[18] Malevich had asked to be buried under an oak tree on the outskirts of Nemchinovka, a place to which he felt a special bond.[22] His ashes were sent to Nemchinovka, and buried in a field near his dacha. Nikolai Suetin, a friend of Malevich’s and a fellow artist, designed a white cube with a black square to mark the burial site. The memorial was destroyed during World War II. The city of Leningrad bestowed a pension on Malevich's mother and daughter.

In 2013, an apartment block was built on the place of the tomb and burial site of Kazimir Malevich. Another nearby monument to Malevich, put up in 1988, is now also situated on the grounds of a gated community.[22]

Malevich's family was one of the millions of Poles who lived within the Russian Empire following the Partitions of Poland. Kazimir Malevich was born near Kiev[7] on lands that had previously been part of the Polish-Lithuanian Commonwealth[23] of parents who were ethnic Poles.[1]

Both Polish and Russian were native languages of Malevich,[24] who would sign his artwork in the Polish form of his name as Kazimierz Malewicz.[25] In a visa application to travel to France, Malewicz claimed Polish as his nationality.[23] French art historian Andrei Nakov, who re-established Malevich's birth year as 1879 (and not 1878), has argued for restoration of the Polish spelling of Malevich's name.

In 2013, Malevich's family in New York City and fans founded the not-for-profit The Rectangular Circle of Friends of Kazimierz Malewicz, whose dedicated goal is to promote awareness of Kazimir's Polish ethnicity.[23] 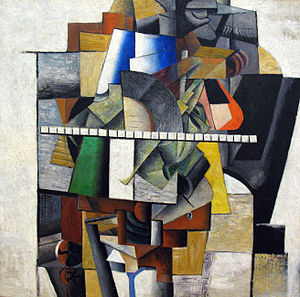 Alfred H. Barr, Jr. included several paintings in the groundbreaking exhibition “Cubism and Abstract Art” at the Museum of Modern Art in New York in 1936. In 1939, the Museum of Non-Objective Painting opened in New York, whose founder, Solomon R. Guggenheim – an early and passionate collector of the Russian avant-garde – was inspired by the same aesthetic ideals and spiritual quest that exemplified Malevich’s art.[26]

The first U.S. retrospective of Malevich’s work in 1973 at the Solomon R. Guggenheim Museum provoked a flood of interest and further intensified his impact on postwar American and European artists.[26] However, most of Malevich’s work and the story of the Russian avant-garde remained under lock and key until Glasnost.[7] In 1989, the Stedelijk Museum in Amsterdam held the West’s first large-scale Malevich retrospective, including its own paintings and works from the collection of Russian art critic Nikolai Khardzhiev.[7]

Malevich's works are held in several major art museums, including the State Tretyakov Gallery in Moscow, and in New York, the Museum of Modern Art[7] and the Guggenheim Museum. The Stedelijk Museum in Amsterdam owns 24 Malevich paintings, more than any other museum outside of Russia.[7] Another major collection of Malevich works is held by the State Museum of Contemporary Art in Thessaloniki.[7]

Black Square, the fourth version of his magnum opus painted in the 1920s, was discovered in 1993 in Samara and purchased by Inkombank for US$250,000.[27] In April 2002 the painting was auctioned for an equivalent of US$1 million. The purchase was financed by the Russian philanthropist Vladimir Potanin, who donated funds to the Russian Ministry of Culture,[28] and ultimately, to the State Hermitage Museum collection.[27] According to the Hermitage website, this was the largest private contribution to state art museums since the October Revolution.[28]

On 3 November 2008 a work by Malevich entitled Suprematist Composition from 1916 set the world record for any Russian work of art and any work sold at auction for that year, selling at Sotheby's in New York City for just over US$60 million (surpassing his previous record of US$17 million set in 2000).

Malevich's life inspires many references featuring events and the paintings as players. The smuggling of Malevich paintings out of Russia is a key to the plot line of writer Martin Cruz Smith's thriller Red Square. Noah Charney's novel, The Art Thief tells the story of two stolen Malevich White on White paintings, and discusses the implications of Malevich's radical Suprematist compositions on the art world. British artist Keith Coventry has used Malevich's paintings to make comments on modernism, in particular his Estate Paintings. Malevich's work also is featured prominently in the Lars Von Trier film, Melancholia.

In 1911 Brocard & Co. produced an eau de cologne called Severny, with the packing and label designed by Malevich. This cologne was produced until the beginning of the 1990s.[29]