listen); German: Kattowitz, Silesian: Katowicy, officially Miasto Katowice) is a city in southwestern Poland and the center of the Silesian Metropolis, with a population of 304,362 as of 2013.[1]

Katowice is a center of science, culture, industry, business, trade, and transportation in Upper Silesia and southern Poland, and the main city in the Upper Silesian Industrial Region. Katowice lies within an urban zone, with a population of 2,746,460 according to Eurostat,[2] and also part of the wider Silesian metropolitan area, with a population of 5,294,000 according to the European Spatial Planning Observation Network.[3] Today, Katowice is a rapidly growing city and emerging metropolis.[4] It is the 16th most economically powerful city by GDP in the European Union with an output amounting to $114.5 billion.[5]

For more details on this topic, see History of Katowice. 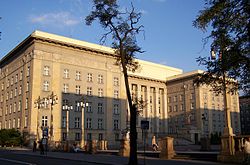 The Silesian Parliament in Katowice.

The area around Katowice, in Upper Silesia, has been inhabited by ethnic Silesians from its earliest documented history.[citation needed] It was first ruled by the Polish Silesian Piast dynasty until its extinction. From 1335, it was a part of the Crown of Bohemia. In 1526 the territory passed to the Austrian Habsburg Monarchy after the death of King Louis II of Hungary and Bohemia. In 1742, most of Silesia was annexed by the Kingdom of Prussia during the First Silesian War.

Kattowitz gained city status in 1865 in the Prussian Province of Silesia.[citation needed] The city flourished due to large mineral (especially coal) deposits in the nearby mountains. Extensive city growth and prosperity depended on the coal mining and steel industries, which took off during the Industrial Revolution. The city was inhabited mainly by Germans, Silesians, Jews and Poles. In 1884, 36 Jewish Zionist delegates met here, forming the Hovevei Zion movement. Previously part of the Beuthen district, in 1873 it became the capital of the new Kattowitz district. On 1 April 1899, the city was separated from the district, becoming an independent city.

Under the Treaty of Versailles after World War I, the Upper Silesia plebiscite was organised by the League of Nations. Though Kattowitz proper voted 22,774 to remain in Germany and 3,900 for Poland,[6] it was attached to Poland as the larger district voted 66,119 for Poland and 52,992 for Germany.[7] Following the Silesian Uprisings of 1918–21 Katowice became part of the Second Polish Republic with some autonomy for the Silesian Parliament as a constituency and the Silesian Voivodeship Council as the executive body). 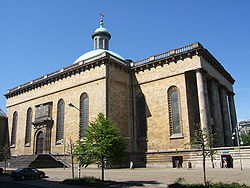 Archcathedral of Christ the King in Katowice

In 1953, after death of the General Secretary of the CPSU Joseph Stalin the City of Katowice was renamed Stalinogród ("Stalin City", like a lot of cities in that time e.g. Staliniri, but originally named after Stalin's death) by the Polish United Workers' Party Polish communist party's government in honor of Soviet dictator, but the new name never gained acceptance and in 1956 the former name was restored.

Severe ecological damage to the environment occurred during the post–Second World War communist governance in the People's Republic of Poland, but recent changes in regulations, procedures and policies of Polish government since the fall of Communism have reversed much of the harm.[8] Economic reforms since 1989 have shifted the economy away from heavy industry towards small businesses.

Katowice is a city in Upper Silesia in southern Poland, on the Kłodnica and Rawa rivers (tributaries of the Oder and the Vistula respectively). It is in the Silesian Highlands, about 50 km (31 mi) north of the Silesian Beskids (part of the Carpathian Mountains) and about 100 km (62 mi) southeast of the Sudetes Mountains. Katowice is in the Katowice Highlands, part of the Silesian Highlands, in the eastern part of Upper Silesia, in the central portion of the Upper Silesian Coal Basin. Katowice is an urban community in the Silesian Voivodeship in south-west Poland. It is central district of the Silesian Metropolis—a metropolis with a population of two million. It borders the cities of Chorzów, Siemianowice Śląskie, Sosnowiec, Mysłowice, Lędziny, Tychy, Mikołów, Ruda Śląska and Czeladź. It lies between the Vistula and Oder rivers. Several rivers flow through the city, the major two being the Kłodnica and Rawa. Within 600 km (370 mi) of Katowice are the capital cities of six countries: Berlin, Vienna, Prague, Bratislava, Budapest and Warsaw. 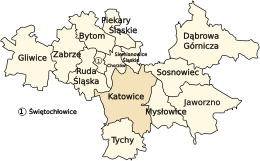 Katowice lies in the centre of the largest conurbation in Poland, one of the largest in the European Union, numbering about 2.7 million. Urban expansion boomed in the 19th century thanks to the rapid development of the mining and metallurgical industries.[citation needed] The Katowice urban area consists of about 40 adjacent cities and towns, the whole Silesian metropolitan area (mostly within the Upper Silesian Coal Basin) over 50 cities/town. The metropolitan area has a population of 5,294,000.

In 2006, Katowice and 14 adjacent cities united as the Upper Silesian Metropolis. Its population is 2 million and its area is 1,104 km2. In 2006-2007 the union planned to unite these cities in one city under the name "Silesia", but this proved unsuccessful.[10]

Katowice did not originate as a medieval town. The city centre was formed in the mid-19th century when it was part of the Kingdom of Prussia and had an ethnic German majority. The buildings of the time are decorated in an eclectic style (mostly Renaissance with elements of Baroque) and elements of Art Nouveau style (secesja). By the end of the nineteenth century the centre was being referred to as a "little Paris", which may surprise visitors today,[11]

Examples of Modernism (International Style and Bauhaus inspired architecture) are in the city centre, and a significant number of Art Nouveau (Secesja) buildings along with Communist Era giants such as Spodek and Superjednostka.

Rynek is the old centre and marketplace. Unfortunately many old buildings were demolished in the 1950s to make space for monumental communist modern buildings.[citation needed] Rynek and several streets around are closed to traffic as a shopping promenades. 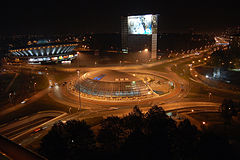 Spodek and Katowice centrum at night

Katowice is a large business and trade fair center. Every year in Katowice International Fair and Spodek, tens of international trade fairs are organized. Katowice has the second largest business centre in Poland (after Warsaw Business Centre). Skyscrapers stand along Chorzowska, Korfantego and Roździeńskiego street in the centre. The newest office buildings (A-class) are the Chorzowska 50, Altus Skyscraper and Silesia Towers (under construction).

The unemployment rateis one of the lowest in Poland, at 2% (2008).[13] The city is still characterized by its working class strength and attracts many people from neighbouring cities (other districts USMU seeking jobs. 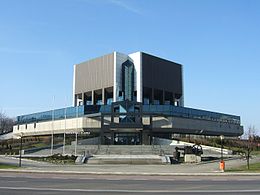 Katowice is a large scientific centre. It has over 20 schools of higher education, at which over 100,000 people study. 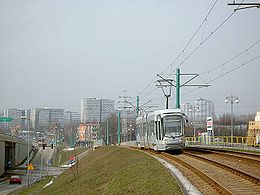 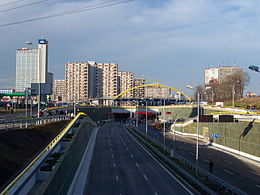 The public transportation system of the Katowice and Upper Silesian Metropolis consists of four branches—buses and trams united in the KZK GOP and the regional rail. Additional services are operated by private companies and the state-owned railways.

Silesian Interurbans - one of the largest tram systems in the world, in existence since 1894. It spreads for more than 50 kilometres (31 miles) (east-west) and covers 14 districts of the Upper Silesian Metropolis. 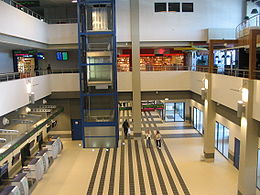 The city and the area are served by the Katowice International Airport, about 30 km (19 mi) from the city center. With over 20 international and domestic flights daily, it is by far the biggest airport in Silesia (~2,5 million passengers served in 2008; 2 terminals, A and B).

Because of the long distance to the airport, there is a proposal to convert the much closer sport aviation Katowice-Muchowiec Airport into a city airport for smaller, business-oriented traffic.

Upper Silesian Railway reached the area in 1846. Katowice Central Station is one of the main railway nodes and exchange points in Poland. It has replaced the old Katowice historic train station.

The Silesian Stadium is between Chorzów and Katowice. It was a national stadium of Poland, with more than 50 international matches of the Poland national football team played here and around 30 matches in UEFA competitions. There were also a Speedway World Championship, Speedway Grand Prix of Europe and many concerts featuring international stars.

Tourists can relax playing tennis or squash, doing water sports also sailing (for example—in Dolina Trzech Stawów), horse-riding (in Wesoła Fala and Silesian culture and refreshment park), cycling or going to one of numerous excellently equipped fitness clubs. Near the city center are sporting facilities like swimming pools (for example "Bugla", "Rolna") and in neighbourhood—golf courses (in Siemianowice Śląskie).

University of Silesia in Katowice - Faculty of Law and Administration

Katowice is twinned with: