Kātyāyana was a disciple of Gautama Buddha. In Sanskrit his name is Kātyāyana or Mahākātyāyana; in Pāli Kaccāna, Kaccāyana, or Mahākaccāna; in Japanese 迦旃延 Kasennen, and in Thai he is called Phra Maha Katchaina (Thai: พระมหากัจจายนะ).

Kātyāyana was born in a Brahmin family at Ujjayini (Ujjain) and received a classical Brahminical education studying the Vedas. Katyayana studied assiduously under Asita, who had predicted that Prince Siddharta would become either a chakravartin, a great worldly ruler, or a Buddha. With a group of seven friends he invited the Buddha to visit, and gained enlightenment (bodhi) while listening to him preach. He was ordained, and made numerous converts in the state of Avanti.[1] He is known as Phra Sangkajai in Thai Buddhism and portrayed as extremely portly.

Kātyāyana is listed as one of the ten principal disciples of Gautama Buddha: Mahākassapa, Ānanda, Sāriputta, Subhuti, Punna, Moggallāna, Mahākaccāna, Anuruddha, Upali and Rāhula. He was foremost in explaining Dharma. 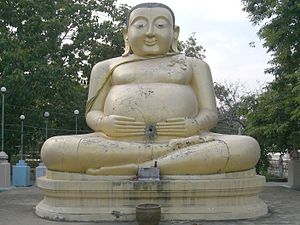 Statue of Mahākātyāyana in Thai tradition

Tradition attributes to Katyāyana the authorship of two late Pāli canonical texts Nettipakarana, a commentary on Buddhist doctrine; and peṭakopadesa, a treatise on exegetical methodology. However it may be more accurate to think of these texts being composed by a school descended from him.

In the Lotus Sutra

In Lotus Sutra Chapter 6, "Bestowal of Prophecy", the Buddha bestows prophecies of enlightenment on the disciples Mahākāśyapa, Subhuti, Mahākātyāyana, and Maudgalyayana.

Nāgārjuna cites the a text which he calls kātyāyanavavāda "Advice to Kātyāyana", in his Mūlamadhyamakakārikā (15.7). The text he cites appears to have been a Sanskrit version of the Pāli Kaccānagotta Sutta (Saṃyutta Nikāya ii.16-17). This has given rise to the idea that Nāgarjuna might not have been a Mahāyānin.[2]