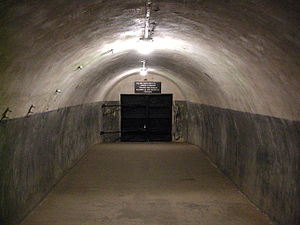 Kaunas massacre of October 29, 1941 also known as the Great Action was the largest mass murder of Lithuanian Jews.[1]

By the order of SS-Standartenführer Karl Jäger and SS-Rottenführer de (Helmut Rauca), the Sonderkommando under the leadership of SS-Obersturmführer Joachim Hamann, and 8 to 10 men from Einsatzkommando 3, in collaboration with Lithuanian partisans, murdered 2,007 Jewish men, 2,920 women, and 4,273 children in a single day at the Ninth Fort, Kaunas, Lithuania.[2]

The Germans and Lithuanians destroyed the small ghetto on October 4, 1941, and killed almost all of its inhabitants at the Ninth Fort. Later that same month, on October 28, SS-Rottenführer Helmut Rauca of the Kaunas Gestapo (secret state police) conducted the selection in the Kaunas Ghetto.[3] All ghetto inhabitants were forced to assemble in the central square of the ghetto. Rauca selected 9,200 Jewish men, women, and children, about one-third of the ghetto's population.[1] The next day, October 29, all of these people were shot at the Ninth Fort in huge pits dug in advance.[2]