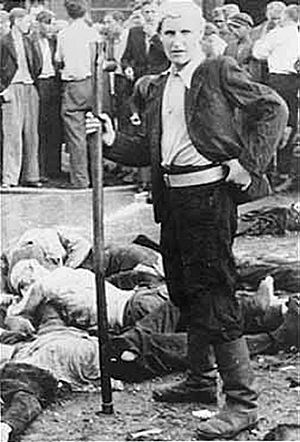 The Kaunas pogrom was a massacre of Jewish people living in Kaunas, Lithuania that took place on June 25–29, 1941 – the first days of the Operation Barbarossa and of Nazi occupation of Lithuania. The most infamous incident occurred in the Lietūkis garage, where several dozen Jewish men were publicly tortured and executed on June 27. After June, systematic executions took place at various forts of the Kaunas Fortress, especially the Seventh and Ninth Fort.[1]

The Lithuanian Activist Front (LAF), a national liberation organisation operating inside Soviet Lithuania, took control of the city[2] and much of the Lithuanian countryside on the evening of June 23. Nazi SS Brigadeführer Franz Walter Stahlecker arrived in Kaunas on the morning of June 25. He visited the headquarters of the Lithuanian Security Police and delivered a long anti-Semitic speech encouraging Lithuanians to solve the "Jewish problem".[3] According to Stahlecker's report of October 15, local Lithuanians were not enthusiastic about the pogrom and so he had to use Algirdas Klimaitis and his men.[3] Klimaitis controlled a paramilitary unit of roughly 600 men that was organized in Tilsit by SD and was not subordinated to the LAF.[3]

Starting on June 25, Nazi-organized units attacked Jewish civilians in Slobodka (Vilijampolė), the Jewish suburb of Kaunas that hosted the world-famous Slabodka yeshiva. According to Rabbi Ephraim Oshry, there were Germans present on the bridge to Slobodka, but it was the Lithuanian volunteers who killed the Jews. The rabbi of Slobodka, Rav Zalman Osovsky, was tied hand and foot to a chair, "then his head was laid upon an open volume of gemora (volume of the Talmud) and [they] sawed his head off", after which they murdered his wife and son. His head was placed in a window of the residence, bearing a sign: "This is what we'll do to all the Jews."[4]

As of June 28, 1941, according to Stahlecker, 3,800 people had been killed in Kaunas and a further 1,200 in other towns in the immediate region.[2] Some believe Stahlecker exaggerated his accomplishments.[5][6]

There is controversy over who is primarily responsible for initiating the massacres, local Lithuanians or Nazi officials.

Lithuanians cite Franz Walter Stahlecker's report of October 15 to Heinrich Himmler. Stahlecker wrote that he had succeeded in covering up actions of the Vorkommando (German vanguard unit) and made it look like an initiative of the local population.[3]

Other authors claim that massacres began even before Germans arrived.[7] They point out that executions took place in the countryside and not just in the city of Kaunas.