The Kazakh Soviet Socialist Republic (Kazakh SSR or KSSR; Kazakh: Қазақ Кеңестік Социалистік Республикасы, Qazaq Keñestik Socïalïstik Respwblïkası; Russian: Казахская Советская Социалистическая Республика, Kazakhskaya Sovetskaya Sotsialisticheskaya Respublika) was one of the constituent republics of the Soviet Union. It was created in 1936 from the Kazakh ASSR, an autonomous republic of the Russian SFSR.

At 2,717,300 square kilometres (1,049,200 sq mi) in area, it was the second largest republic in the USSR, after the Russian SFSR. Its capital was Alma-Ata (today known as Almaty). Today it is the independent state of Kazakhstan in Central Asia. During its existence it was led by the Communist Party of the Kazakh SSR.

The country is named after the Kazakh people, Turkic-speaking former nomads who sustained a powerful khanate in the region before Russian and then Soviet domination. The Soviet Union's spaceport, now known as the Baikonur Cosmodrome, was located in this republic at Tyuratam, and the secret town of Leninsk (now known as Baikonur) was constructed to accommodate its personnel.

Established on August 26, 1920, it was initially called Kirghiz ASSR (Kirghiz Autonomous Soviet Socialist Republic) and was a part of the Russian SFSR. On April 15–19, 1925, it was renamed Kazak ASSR (subsequently Kazakh ASSR) and on December 5, 1936 it was elevated to the status of a Union-level republic, Kazakh SSR. During the 1950s and 1960s Soviet citizens were urged to settle in the Virgin Lands of the Kazakh Soviet Socialist Republic. The influx of immigrants, mostly Russians, skewed the ethnic mixture and enabled non-Kazakhs to outnumber natives. As a result, the use of the Kazakh language declined but has started to pick up again since independence, both as a result of its resurging popularity in law and business and the growing proportion of Kazakhs. The other nationalities included Ukrainians, Germans, Jews, Belarusians, Koreans and others; Germans at the time of independence formed about 8% of the population, the largest concentration of Germans in the entire Soviet Union. Independence has caused many of these newcomers to emigrate.

On December 10, 1991 the Kazakh SSR was renamed the Republic of Kazakhstan. It became independent on December 16, becoming the last republic to secede before the final collapse of the Soviet Union. 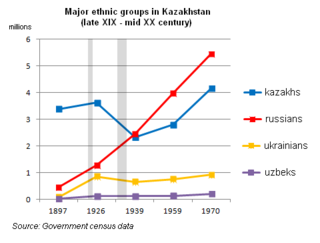 One of the greatest factors that shaped the ethnic composition of Kazakhstan was 1920s and 1930s famines, caused by Collectivization in the Soviet Union. According to different estimates only in famine of 1930s, up to 40% of Kazakhs (indigenous ethnic group) either died of starvation or fled the territory.[2] Official government census data report the contraction of Kazakh population from 3.6 million in 1926, to 2.3 million in 1939.