Kazakh is an agglutinative language, and it employs vowel harmony.

The Kazakh language has its speakers (mainly Kazakhs) spread over a vast territory from the Tian Shan mountains to the western shore of Caspian Sea. Kazakh is the official state language of Kazakhstan, in which nearly 10 million speakers are reported to live (based on the CIA World Factbook's estimates for population and percentage of Kazakh speakers). In the People's Republic of China, more than one million ethnic Kazakhs and Kazakh speakers reside in the Ili Kazakh Autonomous Prefecture within the Xinjiang Uyghur Autonomous Region.

The 2002 Russian Census reported 5,000,000 Kazakh speakers in Russia. Other sizable populations of Kazakh speakers live in Mongolia (fewer than 200,000), Uzbekistan, other parts of former Soviet Union, as well as in Afghanistan, Iran, Turkey, and Germany. 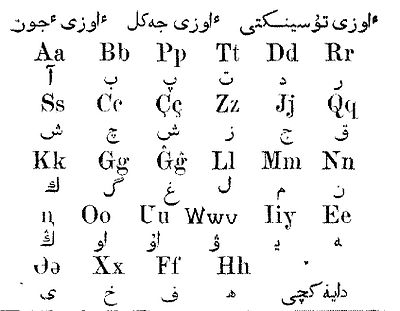 Today, Kazakh is written in Cyrillic in Kazakhstan and Mongolia, while more than one million Kazakh-speakers in China use an Arabic-derived alphabet similar to the one that is used to write Uyghur.

The oldest known written records of languages closely related to Kazakh were written in the Orkhon script. However, it is not believed that any of these varieties were direct predecessors of Kazakh. Modern Kazakh has historically been written using versions of the Latin, Cyrillic and Arabic scripts.

In October 2006, Nursultan Nazarbayev, the President of Kazakhstan, brought up the topic of using the Latin alphabet instead of the Cyrillic alphabet as the official script for Kazakh in Kazakhstan.[3][4] A Kazakh government study released in September 2007 said that Kazakhstan could feasibly switch to a Latin script over a 10- to 12-year period, for a cost of $300 million.[5] The transition was halted temporarily on December 13, 2007, with President Nazarbayev declaring: “For 70 years the Kazakhstanis read and wrote in Cyrillic. More than 100 nationalities live in our state. Thus we need stability and peace. We should be in no hurry in the issue of alphabet transformation”.[6] However, on January 30, 2015, the Minister of Culture and Sports Arystanbek Mukhamediuly announced that a transition plan was underway, with specialists working on the orthography in order to accommodate the phonological aspects of the language.[7]

Kazak exhibits tongue-root vowel harmony, with some words of recent foreign origin (usually of Russian or Arabic origin) as exceptions. There is also a system of rounding harmony which resembles that of Kyrgyz, but which does not apply as strongly and is not reflected in the orthography.

The following chart depicts the consonant inventory of standard Kazakh;[8] many of the sounds, however, are allophones of other sounds or appear only in recent loan-words. The 18 consonant phonemes listed by Vajda are in bold—since these are phonemes, their listed place and manner of articulation are very general, and will vary from what is shown. The borrowed phonemes /f/, /v/, /ɕ/, /t͡ɕ/ and /x/, only occur in recent mostly Russian borrowings, and are shown in parentheses [ ] in the table below.

In the table, the elements left of a divide are voiceless, while those to the right are voiced.

Kazakh has a system of nine phonemic vowels, three of which are diphthongs. The rounding contrast and /æ/ generally only occur as phonemes in the first syllable of a word, but do occur later allophonically; see the section on harmony below for more information.

According to Vajda, the front/back quality of vowels is actually one of neutral versus retracted tongue root.[citation needed]

Per convention, rounded vowels are presented to the right of their unrounded counterparts. Phonetic values are paired with the corresponding character in Kazakh's Cyrillic alphabet.

Kazakh is generally verb-final, though various permutations on SOV (subject–object–verb) word order can be used.[9] Verbal and nominal morphology in Kazakh exists almost exclusively in the form of agglutinative suffixes.

The declension of the pronouns is outlined in the following chart. Singular pronouns (with the exception of сіз, which used to be plural) exhibit irregularities, while plural pronouns don't. Irregular forms are highlighted in bold.

In addition to the pronouns, there are several more sets of morphemes dealing with person.

Kazakh may express different combinations of tense, aspect, and mood through the use of various verbal morphology or through a system of auxiliary verbs, many of which might better be considered light verbs. For example, the (imperfect) present tense in Kazakh bears different aspectual information depending on whether basic present-tense morphology is used, or one of (commonly) four verbs is used:

In addition to this aspectual distinction, Kazakh also exhibits a number of lexicalized pairs of varying converbs. For example, verbs of motion in Kazakh that are rendered in any kind of progressive tense are obligatorily realized with the helping verb жатыр, 'to lie', however the verb must take a unique participial form, -а/е/й. For example, "I am going [right now," would be rendered in Kazakh as мен бара жатырмын, and not *мен барып жатырмын.