The Kelley School of Business is a business school of Indiana University in Indiana, United States. As of 2009, approximately 5,500 full-time students are enrolled on its Bloomington campus, as well as 1,750 students at the Indianapolis campus. In addition, 1,300 students study for graduate degrees through the school's online program "Kelley Direct".[1] 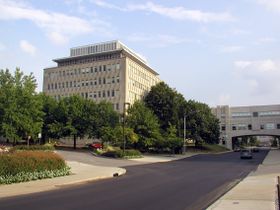 Completed in 2003, the $33 million Graduate and Executive Education Center provides state-of-the-art learning facilities to the Kelley School's graduate and executive education students and houses some of the nation's top-ranked programs and research centers. Featuring elegant limestone and oak architecture, the building provides students and faculty with every imaginable technological advantage and connects with the undergraduate facilities via a two-story limestone walkway.

In 2003, the Kelley School partnered with the Scotts Miracle-Gro Company to launch Bloomington Brands, a unique brand management work-study program for both undergraduates and MBA students.[3] Participating students manage the Osmocote Plant Food brand under contract from Scotts. Bob Stohler, a former Scotts executive, instructs and oversees the students. Students manage all marketing variables for the Osmocote brand, including the selection of product formulas, sizes, packages, and pricing, as well as the development of marketing strategy, advertising, media purchase and selection, promotional activities, and consumer research. Brands students work closely with multiple business functions at Scotts.[4]

In the Summer of 2005 interim Dean Dan Smith was appointed to be the new dean of the school, replacing Dean Dan Dalton who stepped down in 2004.

In a ceremony on October 21, 2005, the Kelley School renamed its Graduate and Executive Education Center in honor of William J. Godfrey, an alumnus and successful businessman who bequeathed land valued at $25 million—the single largest gift in the Kelley School's history.[5]

On March 30, 2012, the Kelley School renamed its Undergraduate Building Hodge Hall in honor of James R. Hodge who gifted $15 million to help renovate and expand the facility. The $60 million expansion and renovation of Hodge Hall broke ground in May 2012 and is expected to be completed by the fall of 2014. The Eli Lilly Foundation donated a substantial amount as well.[6]

In June 2012 Dean Dan Smith stepped down as Dean of the school after serving as dean for seven years to take a new position as President and CEO of the Indiana University Foundation.[7] On May 9, 2013, interim Dean Idalene Kesner was announced as the new dean of the school. Dean Kesner is the first woman to serve as dean of the Kelley School of Business.[8]

Kelley was ranked 8th, tied with Carnegie Mellon University and The University of Texas at Austin, for its Undergraduate Business Program according to US News & World Report. Kelley was ranked 8th for its undergraduate B.S. program in business by Bloomberg Businessweek in their 2014 rankings and 16th for the Master of Business Administration (MBA) program by Business Week in 2014;[15] it was ranked fifth for regional MBA programs by the Wall Street Journal in 2007. According to Buisiness Week, the average SAT score (except for writing) is about 1357 out of 1600.

Bloomberg Businessweek ranked its full-time MBA program at #15 in the 2012 edition (acceptance rate of 39% with average GMAT of 671), and at #4 among all public universities.[15] Its top-ranked MBA program for full-time residential students has been cited in Business Week as one of the favorites of corporate recruiters looking for general managers, marketing talent, and finance graduates.

Teaching quality in core classes has been ranked #1 in the nation by both the Princeton Review and Business Week. The school's doctoral program has contributed to overall teaching and research by sending more than 1,000 doctoral graduates to key positions in industry and academe. Most recently, Kelley's undergraduate school was ranked 8th in the nation by Business Week, one behind the University of Pennsylvania Wharton School. The entrepreneurship program was ranked #1 in the nation among public business schools in the same report.[16]

In 2015, U.S. News ranked these undergraduate programs in the top 10 in the nation:

In the 2010 QS Global 200 Business Schools Report[17] the school was indexed as the 24th best business school in North America.

The Business/SPEA Information Commons on the Bloomington campus serves the research and study needs of students and faculty of both the School of Business and the School of Public and Environmental Affairs. 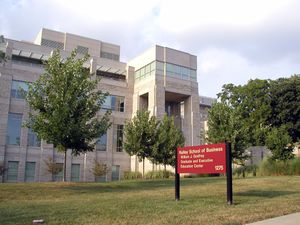 The Godfrey Center has 180,000 sq ft (17,000 m2) of classroom and office space for use by graduate students, corporate recruiters, executive visitors and administrators. It houses administrative offices for the Master of Business Administration program, Kelley Executive Partners, Kelley Direct, the Johnson Center for Entrepreneurship and Innovation, and graduate accounting and information systems programs.

The Kelley School renamed its Graduate and Executive Education Center in honor of William J. Godfrey, an alumnus and successful businessman who has bequeathed land valued at $25 million.

The building features classrooms and other facilities that maximize student-faculty interaction in a collaborative setting. The most wired building on the Bloomington campus, it features both direct and wireless connectivity that will help students both inside and outside the classroom. Other special features include a trading room, which includes informational resources comparable to most Wall Street firms, allowing students and faculty to monitor the markets, develop financial products, and engage into trading activities with other counterparties. The Princeton Review recently ranked Kelley's quality of facilities as #2 in the nation.

In spring of 2012, the Undergraduate Building was named Hodge Hall and construction started on a $60 million project to update the undergraduate facility used since 1966.[19] During the initial construction, an additional 90,000 sq ft (8,400 m2) of space will wrap around the existing building and include new classrooms, meeting rooms, collaboration space, and a student commons. In phase two, the existing building will be renovated. The expected completion date is Fall 2014.